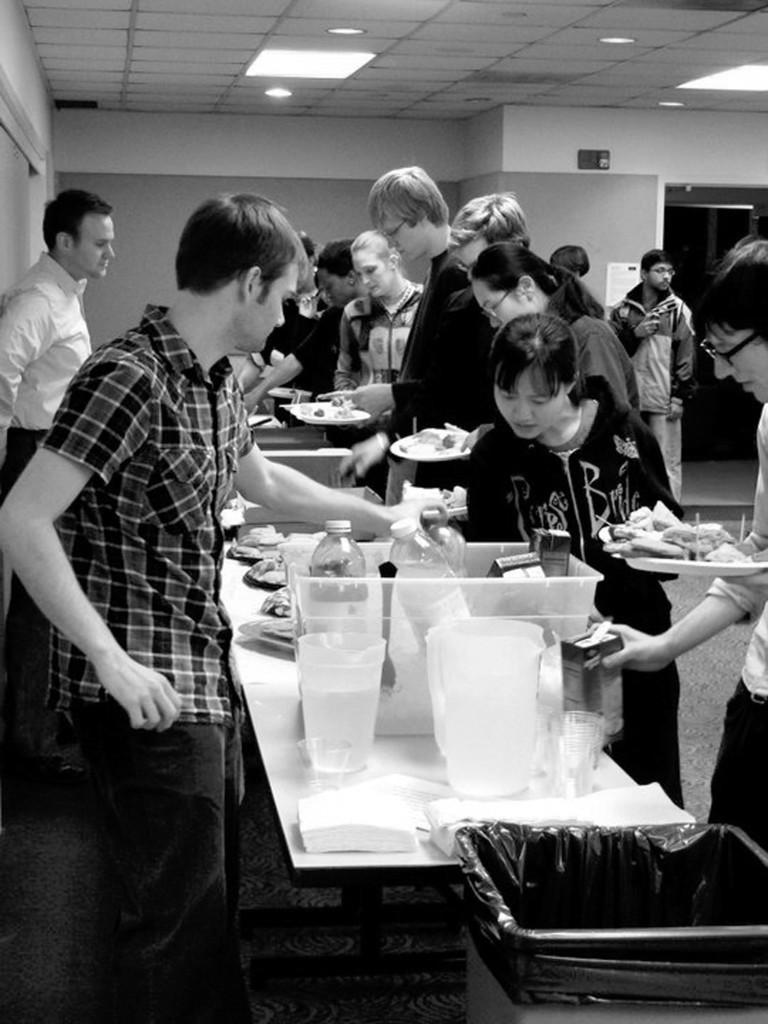 Last Friday, Nov. 12, the Case Animal Rights and Ethics Society (CARES) held its biggest event of the semester, Compassion Feast and Ask-a-Vegan Panel. About 75 students and community members attended to share an entirely plant-based dinner, after which the panel was opened for discussion.

Most guests seemed to agree that the dinner offered a delicious and well-balancedarray of vegan fare. There was a variety of “rabbit food,” as one guest put it, including fruit salad and vegetables with hummus. There were also more substantial options such as pizza, falafel, General Tso’s popcorn “chicken,” and Italian paninis, as well as cookies and almond milk for dessert.

Guests also had a chance to peruse a variety of literature, ranging from vegetarian cookbooks to pamphlets on the dairy industry to scientific journals on nutrition and disease. Notecards were provided for guests to write questions for the panel, which consisted of five devoted vegans: Jen Kaden, president of the Cleveland Animal Rights Alliance, Donna Liebenauer, a sign language professor at Tri-C, two undergraduate CWRU students, Taylor Wolfram and Jeff Bhasin, and recent CWRU graduate Michael Spence.

Many of the questions stemmed from pure curiosity about the challenges of a vegan lifestyle. For instance, one guest wanted to know if chewing gum is vegan (apparently most of it is). Other questions concerned everyday dilemmas, such as finding vegan food while traveling or participating in work functions. The panelists stressed that they have not struggled to adapt. If you’re going to a catered function, it’s not difficult to call ahead, they said; if you’re coworker brings in a birthday cake, you can still be social without eating. The panelists agreed that, at least in their experience, people are generally helpful and understanding.

One of the more controversial questions, which sparked considerable debate, concerned the panel’s stance on zoos. This is somewhat of a gray area among vegans, according to the panelists, but they maintained that a purely vegan lifestyle would not include zoo visits. “We all agree than animals should live on their own terms, in their natural habitat,” said Kaden.

However, members of the audience brought up valid points—not only do zoos play an important role in animal conservation, they also educate their visitors and help instill in them a love and respect for animals. One guest suggested that visiting zoos as a child might be a factor in the decision to adopt a vegetarian or vegan lifestyle. At the end of the discussion, it was clear that veganism has its ambiguities. Some people define it strictly as eliminating animal products from your diet; others consider it, according to Kaden, “an all-encompassing ethic concerning the choices that you make.”

Another concern was nutrition — a common deterrent to people considering going vegan—and especially sources of protein in a vegan diet. Taylor Wolfram, an undergraduate nutrition major on the panel, explained that many Americans get more protein than necessary, leading to a misconception of how much protein they really need. While meat is protein-rich, it is not the only source of protein in the average American diet—many other foods, such as beans, rice, bread, and pasta, have significant protein content. According to Wolfram, protein deficiency is uncommon in vegans and carnivores alike.

With their Compassion Feast and Ask-a-Vegan Panel, CARES attempted to spread their message without preaching it. The event was an excellent opportunity for anyone, no matter what their diet, to learn more about the challenges and rewards of a vegan lifestyle.