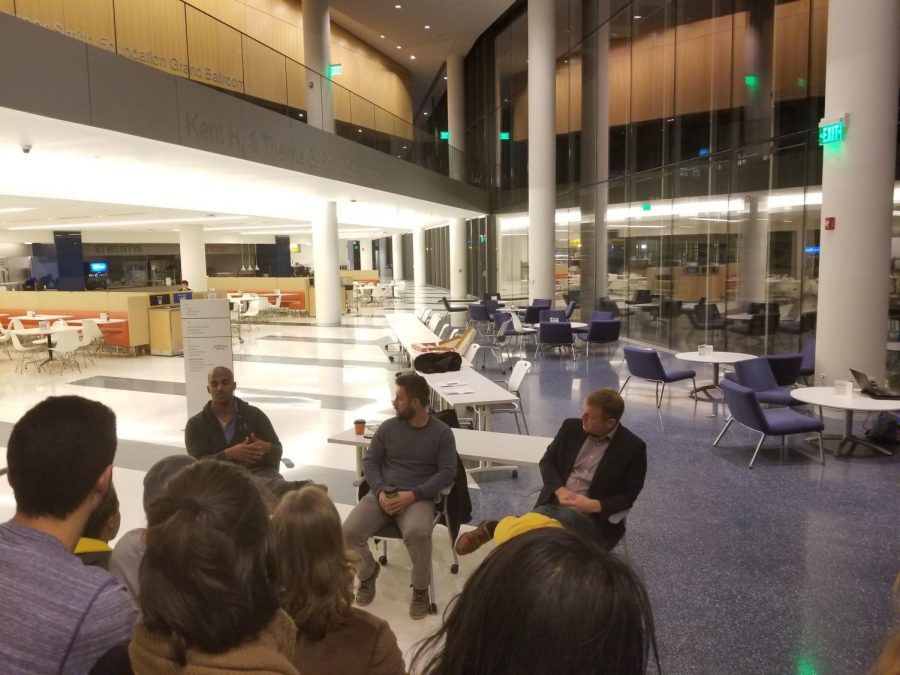 The headlining speaker at the event was Ken Harbaugh, a graduate of Yale Law School who is running to represent Ohio’s District 7 for congress in 2018. A former Navy Pilot, Harbaugh was the recent president of Team Rubicon Global, an international disaster relief organization that helps to retrain veterans as emergency first responders.

Other speakers were Canton, Ohio natives Kevin Samy, an expert in climate change, national security policy and a former speechwriter for cabinet members of the Obama Administration and Chris Roessner, University of Southern California alum and Iraq war veteran turned established screenwriter, who created the film “Sand Castle” about his experiences in the war.

Keeping his introduction brief, Harbaugh began the talk by saying he was much less interested in hearing himself speak, and instead wanted to listen to what upset students regarding today’s political climate and to answer any questions they may have about changes they wanted to see in their community.

“The election of 2016 felt like a punch in the gut,” he said. “It’s not representative of [what America actually wants].”

Harbaugh shared that he is giving up his passion of being president of Team Rubicon Global to run for office, because he felt like it was his duty to fight for what he called the “accurate representation of American citizens.”

Furthermore, he believes his training from service in the military, as an Emergency Medical Technician (EMT) and as a firefighter, will help him properly deal with “the disaster in D.C.”

Many were caught by surprise when Harbaugh concluded his introduction saying, “I’ve never been [more proud] of my country” because he feels the spirit of America is in its citizens standing up against injustice. He then opened up for questions.

A student, worried about the current political division, asked how the country could be brought together. Harbaugh emphasized the importance of having meaningful conversations with people with opposing political views, saying that people who voted for Trump have much more in common with [people who didn’t] than we realize.

Samy agreed with the proposition that having human to human conversation, not simply talking over social media, is vital to bridging the gap because “there is more that unites us than divides us.”

Harbaugh said that he aims to set an example through his campaign by starting conversations and public dialogue with opposing parties that can help bridge that gap.

Another student’s question dealt with the falling rates of unionization and the resultant impact on the economy. Harbaugh responded that this is occurring because it’s not just about the right to work in “right to work states.” People are straying away from unions because the safety standard has fallen: “It’s not just about workplace inequality anymore, it’s about workplace safety and mortality,” he said. He hopes to help fight for policy to provide better working conditions for union workers.

When asked about his top legislative priorities, Harbaugh said his main concern was health care.

“We are the richest country on earth,” he said. “It is highly unethical to force families to choose between healthcare or buying food for the rest of the month.”

He is also concerned with gun control, but felt confident that most Americans believe in responsible gun ownership and as someone from the military, he finds it ridiculous that so many people have so many powerful guns. He believes we should restrict the scope of the Second Amendment because he doesn’t believe that the right of one owning a gun supersedes the right of others to live.

One concerned student wanted to know what his plan was to deal with the opioid crisis.

Harbaugh welcomed this question and said the first step is to win an argument about what we are dealing with. He sees the issue as a medical one, and it should be treated as such, while he thinks that the other side views it as a law enforcement issue.

He added, “We cannot arrest our way out of this problem.”

Harbaugh believes the only way to solve the problem is to understand its societal causes and recognize what causes addiction.