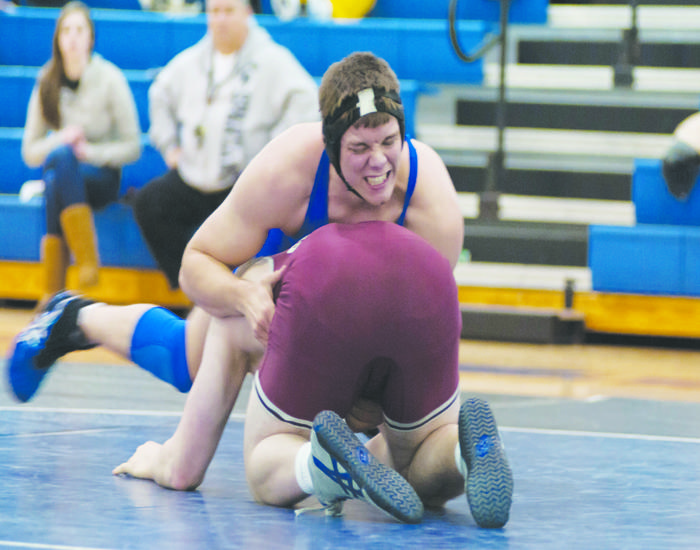 It may have been cold and windy out last Saturday, but the heat was on in Horsburgh Gymnasium, where Case Western Reserve University hosted the 2012 UAA Wrestling Championships. The event welcomed the New York University Violet and the University of Chicago Maroon for a round robin tournament to decide the conference champion. NYU won the conference title after posting a 2-0 record, defeating Chicago in a close 19-14 matchup and defeating the Spartans 43-7. Case finished third with a 0-2 record while falling to Chicago, 40-6, and to NYU.

The event kicked off with a close match between Chicago and NYU. Fans trickled in as each matchup progressed. Chicago and NYU traded team points. Most matches ended in close scores, eventually leading to a nail-biter situation in the last few weight class matchups. It all came down to the 285 lb. contest between NYU’s Jamie Myers and Chicago’s Jeff Tyburski. Myers went ahead in the points and held most of the control into the third period. Myers fought back, hoping to score right before the bell. He succeeded, committing a foul as time expired, but it was not enough for Tyberski. Myers went ahead with a point from riding time to win 5-4, giving NYU the overall win.

Between the NYU and Chicago matchups, a special ceremony was held to honor former Case wrestling coach Bob Del Rosa. Family, friends, and fans congregated in the center of the bleachers to pay tribute to the longtime Spartans coach, who passed away last summer. In wrestling tradition, Del Rosa’s shoes were placed at the center mat by his grandchildren. A special reading was given by Del Rosa’s former athlete Jim Treleaven, class of ’69, as the crowd reflected. It was also announced that a study space in Veale would be built and dedicated to Coach Del Rosa in April.

Although the Spartans dropped both dual matches, they gave several strong performances. Senior Cale Harter received All-UAA honors in the 285 lb. weight class with a 2-0 performance on the day. Harter’s first victory came over Chicago’s Jeff Tyburski in a 5-0 decision. Harter finished off the stellar performance with another decision over NYU’s Rudy De La Cruz 7-1.

Other Spartan victories came from senior Kyle Weaver and sophomore Brian Snyder. Weaver wrestled a very close match against Chicago’s James Layton in the 165 lb. weight class. Weaver was down most of the match, but wrestled to keep the score close. Late into the 3rd, Weaver scored crucial points to go ahead 3-2. With just a few seconds left on the clock, Weaver let the time expire and came away with the close decision. Weaver’s victory was the first team point the Spartans put on the board. Snyder scored a key victory in the match against NYU. Snyder wrestled Sam Friedfeld in the 157 lb. weight class and came away with a 12-3 major decision.

The Spartans ended up forfeiting key points to both opposing teams. With a shortened roster, Case only filled six of the ten weight classes in each matchup. The forfeits put Case at a significant disadvantage in the team score, leading to the lopsided defeats.

Next up for the Spartans is another home contest, the annual Si Ostrach Meet. The quad meet between Case, Muskingum, Thiel, and RIT will take place tomorrow, Feb. 18 in Horsburgh Gymnasium. The first action starts at noon.