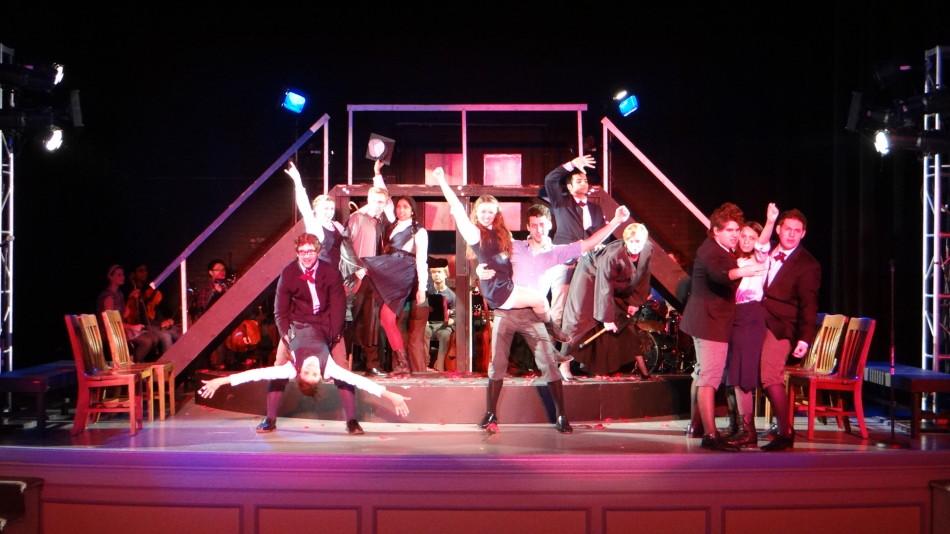 “Spring Awakening” opens in a quiet German village, but from the first scene tragedy looms over its young characters. The rock musical features an original modern score and is based on a controversial 19th century play. This update works because of the unexpected combination of the play’s dark themes and the music’s often humorous tone, which drew the attention of the Case Footlighters.

“The first part is light and fun, and the second act is more serious,” said Andrew Santin, who plays the teenager Melchior Gabor in the theater group’s spring production. “I like really serious and heavy material, but this isn’t a drama. It has a good balance.”

The musical confronts topics such as abortion, abuse and suicide through the stories of adolescents growing up in a repressive society. Many characters struggle with cultural restrictions on their sexualities, a problem prominently featured in dialogue and almost every song. “It’s bold and dark, but there are moments of light,” said Mara Grigg. Grigg plays Wendla Bergman, a naive but curious girl who experiences more than her share of darkness as the musical progresses.

Although every character has a name and the narrative offers glimpses into their lives, the main focus is on Wendla, Melchior and his childhood friend Moritz Stiefel. At the beginning, Melchior is the only character who is prepared with any knowledge about puberty or sex. Moritz is plagued by erotic dreams that he thinks signal insanity, and Wendla begs her mother to explain pregnancy to her. Melchior takes his knowledge of the world seriously and believes that others should share it, although his beliefs lead him to trouble. “Melchior is a rebel who feels oppressed by society,” said Santin. “The musical is focused on building a better world, where people are understood.”

There prove to be many obstacles on the way to a better world, and most of them come in the form of adults. “We are the antagonistic driving force,” said Brandon McCourt, who plays every adult male in the production. “My characters are very strict and they impose their misguided values on others.”

McCourt and Abby Walker, who plays every adult female, make their many characters distinct using subtle costume changes and by altering the way they move and speak. At one point McCourt transforms from a grieving parent on the edge of collapse to the hunched and bitter headmaster in a moment. Walker and McCourt are comical as scheming administrators, and adeptly distinguish these characters from the other adults they play.

Grigg and Santin also shine in this production. Grigg’s dramatic voice is well-suited for the score, and she plays a relatable Wendla, despite the character’s extreme innocence. Santin leaves room for some ambiguity in Melchior’s character, which is a deft move, as our protagonist is not a saint. Zachary Palumbo plays a somewhat stiff Moritz, whose misery is not compelling. His acting is most convincing when he is accompanied on stage by Beth Magid, who sings well and temporarily breaks him out of his tense unhappiness.

Overall, “Spring Awakening” is an energetic play that tackles the dark subjects accompanying adolescence in a culture of repression. The musical combines humor and heartbreak using contemporary music and an enduring story that feels fresh more than a century after it was written.