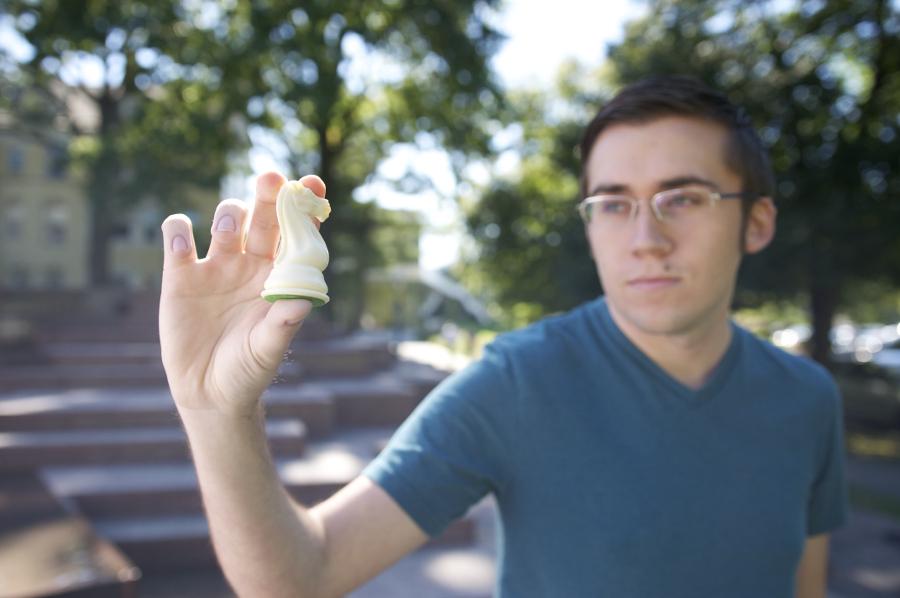 Senior Gabe Ewing achieved national chess master status this past summer, bringing him into the top two percent of chess players in the nation.

Move, hit the clock, write and repeat. In chess, this pattern is always the same, one that Case Western Reserve University senior Gabriel Ewing has worked on for years. His skill has earned him national success and recognition as a U.S. National Chess Master this past summer.

“Getting to master was the goal for forever,” Ewing said.

Ewing began playing chess at age five with his grandfather. He quickly started taking lessons at his coach’s house on Saturday afternoons with several other students. At age 11, he started playing competitively.

However, Ewing’s home state of New Mexico held him back.

“The only way to get better is to play live tournaments,” he said. “And there aren’t a lot there.”

Ewing continued competing, though, eventually going on to compete in the 2014 World Open in Arlington, Va., where he earned his national master status. To become a national master, a player must earn 2200 points on the United States Chess Federation’s scale, which estimates how good a player is compared to the other people who they play against.

A typical chess competition spans a whole weekend, with around 80 competitors divided into sections by skill. Players play five games throughout the weekend, with future opponents selected based upon performance in previous games.

The World Open lasts seven days, with players competing in nine games. Ewing won seven of his games, drew one and lost one.

Ewing is currently the second best chess player in New Mexico, and is among the top two percent of chess players in the United States.

Ewing likes to start games with the Sicilian Sveshnikov, a popular opening move involving moving the c pawn to the e4 space, but he says that he “tries to make it hard to figure that out.”

Ewing’s favorite type of game is a blitz round, where players each get five minutes per game. Ewing says that a traditional game is “exhausting,” with two hours per person for the first 40 moves.

Ewing plans to go to several major competitions this fall, including the Cleveland Class, the Cleveland Scholastic Open and the Kings Island Open, as well as the once a month local tournaments. He is also a member of the Chess Club.

The next step for Ewing is to achieve senior master status in the World Chess Federation ranking system. He only has 100 points to go.