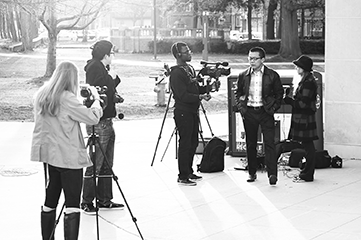 It’s a typical day at Case Western Reserve University, until you start walking along Leutner Pavilion, where there seems to be some sort of spectacle. Video cameras surround the scene, and an unsuspecting individual is interviewing a student. All of the sudden, the student shrieks and jumps. This is not your average interview, but rather a prank show on campus. Case TV, a new unrecognized student group founded in January 2013, dedicates themselves to pulling pranks around the CWRU community, while inciting excitement around campus.

Founder and current president of Case TV, Donald Qiao, said, “We do pranks, we do comedy, we do romance. We do a variety of shows, all kind of things, and bring joy and excitement to the community.”

Different from the traditional hidden-camera shows, the show features interviews with students walking about on campus when suddenly, unexpected acts of mischief happen.

“We do crazy things. Life is too short to not bring joy to others and to ourselves,” stated Qiao.

Nonetheless, expressions of amusement and exuberance appear on those who have been tricked. It is a good laugh after all, and does bring smiles in unexpected ways.

“With Case TV, I think of it as a relief from my academic stress. Still, it takes so much courage to do these things,” Qiao shared.

Originally, Case TV was intended to be a show that interviewed various students around the diverse CWRU campus, seeking to bring people together through common interests and hobbies found through the interviews. But the show shifted during the shooting for the first episode when a girl was asked if she’d like to be a part of it. Wanting to bring her friends, she left for a while and when she came back, she was astonished to find that someone else had replaced her.

Her expression and reaction caught Qiao’s attention, and this incident lead Qiao to spice up elements of the show a bit, with a twist to the interviews by adding pranks. Some of the components of the show feature an actor walking up to the interviewee and acting out some sort of spectacle. To viewers of the scene, the students’ facial expressions were priceless. At the same time, Qiao hopes to still maintain the same goal of spreading happiness to the CWRU campus, as well as filling the gaps of diversity by connecting individuals.

Case TV shows can be found on their YouTube channel, where Qiao believes that by watching the show, viewers will find themselves smiling and laughing, thoroughly entertained. They hope to become a recognized student group, but are working independently until then.

Qiao explains passionately, “It is the spirit of doing the things you love without caring about what others think. It’s the spirit of carelessness. It’s this kind of spontaneity and freedom.”