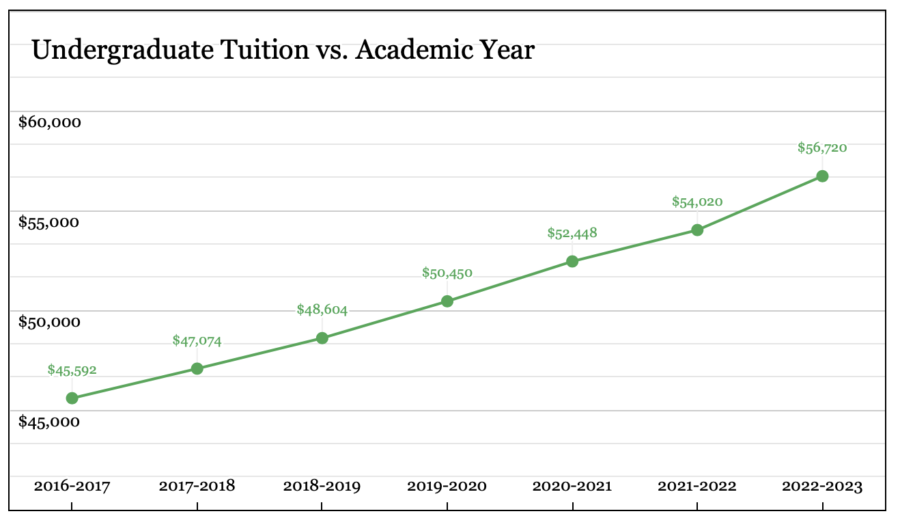 Tuition and fees have increased drastically up to the 2022-2023 school year, threatening CWRU students' financial security

The tuition for returning undergraduate students to attend Case Western Reserve University in the 2022-2023 academic school year will increase by 5% from last year’s figure, an amount totaling to $56,720.

The sole reason stated by the CWRU administration for such a tremendous increase in tuition comes from the recent surge in inflation. Last week, the federal government made an announcement that the consumer price index climbed 7% in 2021—the nation’s highest annual gain since June 1982. Gasoline and fuel prices jumped to 50%, while food and electricity each rose by more than 6%.

CWRU stated that they will be investing the revenue from increased tuition dollars into hiring faculty in “strategic areas, enhanced technology, and improvements to teaching labs and classrooms.” No further detail on these categories were provided. CWRU has also stated that it will augment its need-based financial aid as part of these changes.

In addition, CWRU has worked with Undergraduate Student Government (USG) leaders over the past two years to increase clarity on why tuition is increased and how it will be spent. The university has provided substantial information on the topic of the university’s budget and tuition process through the organization. Furthermore, USG leaders have frequently reached out to make sure the administration recognizes student priorities in its expenditure.

Although this sharp increase in tuition is substantial, CWRU’s tuition is the second lowest among private universities in the Association of American Universities, an organization composed of the United States’ and Canada’s leading research institutions.

In the coming years, college tuition is expected to continue to rise steadily, but hopefully not as much as it did this year.