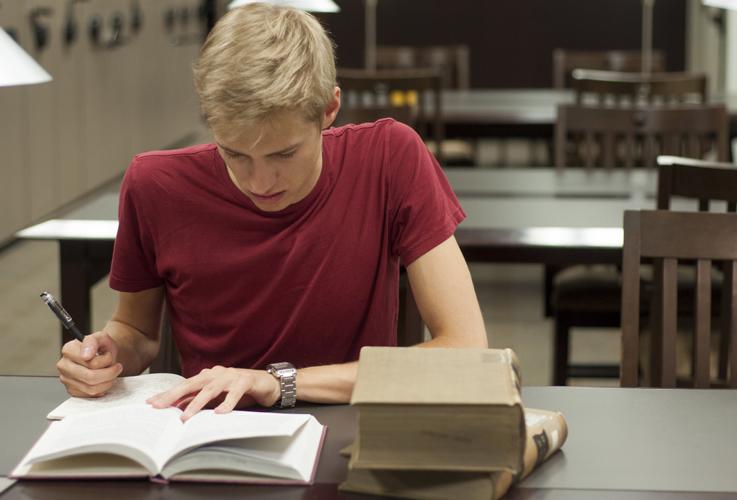 A student studies in the Judge Ben C. Green Law Library. The CWRU school of law will be making sweeping changes to its curriculum next school year to better prepare its graduates for an increasingly competitive job market.

As law schools across the country face declining admission and graduates are finding it increasingly difficult to find jobs, the Case Western Reserve University’s School of Law has decided to make sweeping changes to its curriculum, which will take effect at the start of the 2014 school year.

The goal of the new curriculum is to provide students with real-life experience to make it so that they are client-ready when they graduate. In addition to the typical law school courses on contracts, property, civil procedure and torts, students will be required to write more frequently. Students will also be required to take leadership courses taught at the Weatherhead School of Management.

Students will begin working with clients during their first semester, and will spend at least one semester during their third year of school in an internship or clinical position to give them real-world experience before going into the workforce.

The School of Law will also begin offering free summer classes to students so that they can participate in internship programs during fall or spring semesters.

Lawrence Mitchell, dean of the School of Law, is enthusiastic about the changes.

“We have long been a leader in experiential education, but the changes in the legal profession over the last 10 years have told us that we weren’t doing enough,” he said.

“Our students not only needed more skills, but they needed to be better educated in core competencies that they weren’t getting from their classroom education. In order to respond to the demands of employers for students who are client-ready—who possess excellent legal education, writing skills, teamwork, and leadership, we decided that it was time to do more for our students,” said Mitchell.

Mitchell, as well as a committee of other faculty and administrators, started developing the new curriculum in May. Mitchell talked to more than 70 law firm hiring partners, chief executive officers and other employers about the qualities that they looked for in potential employees.

The new curriculum was passed by the law school faculty with a vote of 35 for, three against and one abstention.

“We are putting our students in front of clients as soon as they get here. We are integrating a list of skills training so there will be a comprehensive infusion of theory and practice,” Mitchell said. “We are requiring a semester of full time work, and no other law school in the country that I’m aware of does that.”

The School of Law decided to make the change as they, and law schools around the country, faced fewer applicants and declining starting salaries for their graduates.

According to the National Association for Law Placement, just under 85 percent of law school graduates found jobs within nine months of graduating, down from 92 percent in 2009. Graduates also saw an annual median salary of $61,245, as compared to $72,000 in 2008. According to figures by US News and World Report, the average debt for a recent law school graduate is nearly $100,000.