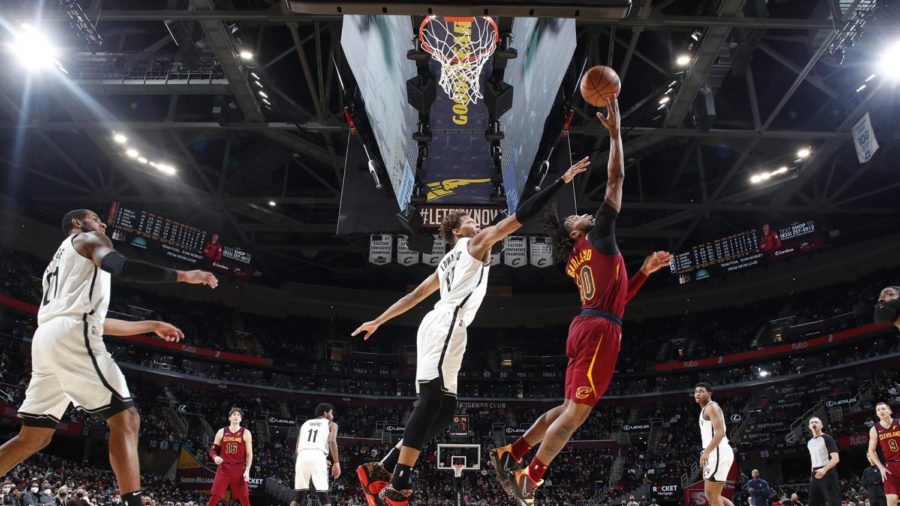 Darius Garland's (10) 31 points were not enough to top the Brooklyn Nets on April 8.

In a season of ups and downs, the Cleveland Cavaliers ended the regular season on a high note. With their current standing they have a chance to do something the team has not done since LeBron James left town: make the playoffs.

After a strong start to the season bolstered by an unconventional roster, with irregular rotations that often saw three seven-foot players on the court at the same time, the team hit a slump after the All-Star break. Injuries to key players played a big role in this slump. Ricky Rubio, Rajon Rondo, Jarrett Allen and Evan Mobley, who might just be this season’s Rookie of the Year, were all injured at various points in the last couple months. The team fell from No. 3 in the Eastern Conference, with a 35-23 record at the All-Star break, to No. 8 after going 9-15 to close out the season.

Coming into April, nothing was certain for the Cavs, with only a five-game difference between the No. 5 and No. 9 seed in the Eastern Conference. With the new NBA playoff structure, only the top six teams in each conference were guaranteed a spot in the playoffs. The No. 7 and No. 8  seeded teams would participate in the Play-In Tournament.

Things became even more complicated as Evan Mobley suffered an ankle injury in late March, which sidelined him for an extended period. The team had a challenging schedule in April with games against championship-caliber teams, including the defending champion Milwaukee Bucks, the Philadelphia 76ers and the Brooklyn Nets.

The Cavs won their first game of April against the New York Knicks behind Darius Garland’s 24 points and 13 assists. This win put the team in the No. 7 seed with a three-game lead in the rankings over the Brooklyn Nets and a one-game lead over the Atlanta Hawks.

The team then hit a wall, going on a three-game losing streak against the Philadelphia 76ers, Orlando Magic and Brooklyn Nets. The Brooklyn game was especially damaging as the loss caused the Nets to equal the Cavs’ record. However, the Nets edged ahead to No. 7 in the standings since they held the tiebreaker over Cleveland.

The Cavaliers needed to win their last game of the season, which was against the third-ranked Milwaukee Bucks, in order to clinch their spot in the Play-In. Fortunately for the Cavs, the Bucks rested their regular starters—their seeding for the playoffs was set and the game was meaningless for them. The Cavaliers won 133-115 off strong performances from Kevin Love, who scored 32 points off the bench, and Lauri Markkanen, who added 23 points and 7 rebounds. With this victory, the team maintained their hold on the No. 8 seed in the Eastern Conference, holding off the Atlanta Hawks in the rankings.

Now the team has a solid shot at the playoffs by participating in the Play-In tournament. The Cavs faced the No. 7 seeded Nets on April 12 and lost 115-108. Now they must face the Atlanta Hawks on Friday, April 15 in Cleveland, with everything on the line for the final playoff spot.