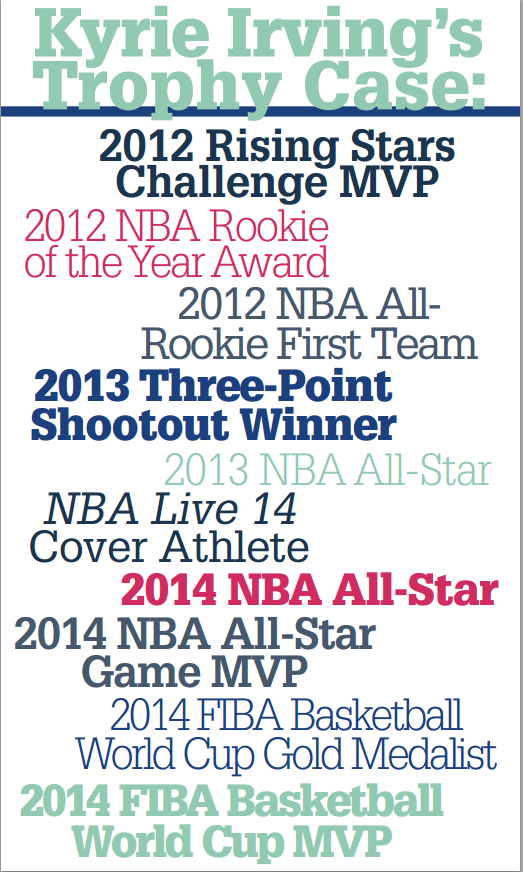 While the Cleveland Cavaliers had far and away the splashiest off-season of the NBA—signing two perennial all-stars and a host of solid, veteran supporting cast players—perhaps none of it could have been possible without their initial, less heralded move: re-signing Kyrie Irving to a five-year, $90 million contract extension.

It’s not often that a team has the luxury of signing a blossoming young talent like Irving’s and have the move be referred to as the “less heralded” of their off-season signings. After all, the kid is only 22 years old, and boasts one heck of a resume:

Any player with those kind of accolades could consider his career a massive success. What makes Irving so impressive is that he’s compiled these awards in only three NBA seasons, and as he is so young (he is now the youngest active player on the Cavaliers roster) he only has room to grow and improve his overall game.

What’s even scarier than that? The fact that Irving may be the third scoring option for the Cavs.

With Lebron James returning to town and Kevin Love joining the team, many predict that Irving will be the third-leading scorer on the squad. But don’t think for one second that just because Irving is no longer the primary scoring threat that he isn’t just as, if not more valuable to the Cavaliers this year than any other year—and in a multitude of ways.

For starters, although James has made it very public that his desire to return to Cleveland was mostly rooted in his deep hometown connection to Northeast Ohio, he has also acknowledged that he made his return in part to play alongside the offensive weapon that is Kyrie Irving.

“I’ve never played with a point guard like Kyrie Irving, a guy that can kind of take over a game for himself, when we need it.”

That’s pretty big praise, especially coming from a four-time league MVP and two-time NBA champion; not to mention the current best player in the world.

And such praise is warranted, considering the point guards King James has played with during his 12-year career. Players such as Eric Snow, Jeff McInnis, Mo Williams and Mario Chalmers have been at the helm of the offense for James’ teams over the years.

No disrespect to them as players, but none even come close to having the talent level that Irving has.

That being said, it’s no mystery as to why James is eager to pair up with the likes of Irving—he simply hasn’t played with a player quite like him before. James now has a player who can handle the ball and create offense on his own from the point guard position, meaning James won’t have to be the primary ball handler at all times. Irving also has the deadeye accuracy from the 3-point range needed to knock down the open jumpers that will surely be available to him when either James or Love are double-teamed. These attributes only add to Irving’s value to the Cavaliers, as he already has helped draw James back to the city of Cleveland.

That fact might be Irving’s greatest value to the team, and also his greatest assist as the Cleveland Cavaliers point guard.

After James announced his return, Kevin Love decided to follow suit. Irving’s signing led to James’ signing which lead to Love’s signing—and just like that, Cleveland found themselves with a potentially historically-great “Big Three.”

Case in point, without the initial re-signing of Irving, none of this may have been possible.

The dominos fell the right way for the Cavaliers, and Irving provided the primary push—just like he will do this season on the court for the Cavs as their mercurial point guard with seemingly unlimited offensive capabilities.

After everything that has happened for Cleveland this offseason, the Cavaliers are still Kyrie Irving’s show, even if he’s no longer the main attraction.