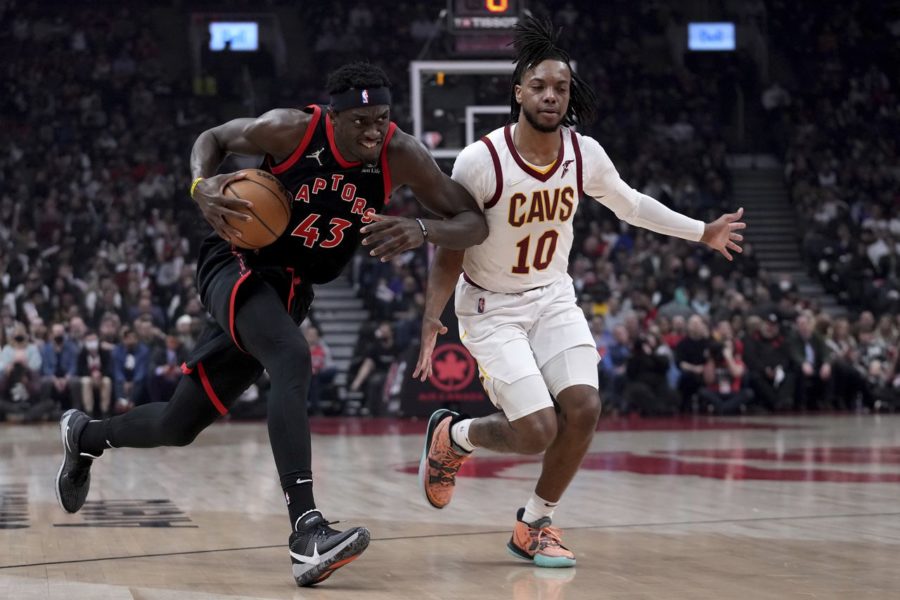 Toronto Raptors forward Pascal Siakam dribbles past Cleveland Cavaliers guard Tim Frazier during the two teams' faceoff on March 24, one of several defeats for the Cavaliers in their late-season skid.

The Cleveland Cavaliers’ late season struggles continue with a 7-10 record since the All Star break. With All-Star center Jarrett Allen out indefinitely since March 6 with a fractured finger and other key players missing time, this is not surprising. But despite the team’s late-season slump, guard Darius Garland has continued his impressive play, having posted an average 25.8 points, 10.9 assists and 3.6 rebounds per game since the break—making his case for the Most Improved Player Award this season.

Prior to this week’s matchups against the Toronto Raptors, Chicago Bulls and Orlando Magic, the Cavs sat at the sixth seed in the Eastern Conference with a record of 41-31, tied with the Raptors and just a game behind the Bulls. This final stretch to end the season will be crucial since the Cavs can either secure a playoff berth or fall to the play-in tournament, where they would be forced to further compete for a spot in the playoffs.

Cleveland’s game against Toronto on March 24 was a big game for both teams as they fought for a playoffs spot. This was also a chance to see two of the leading Rookie of the Year candidates—Cleveland forward Evan Mobley and Toronto forward Scottie Barnes—face off. Forward Lauri Markkanen led the Cavs with 20 points, Garland notched 10 assists and Lamar Stevens added 16 points off the bench.

These efforts were in vain as Toronto forward Pascal Siakam’s 35 points, 5 rebounds and 6 assists led the Raptors to a 117-104 victory. All-Star guard Fred VanVleet contributed 10 points, 5 rebounds and 8 assists, while forward Chris Boucher added 17 points, 8 rebounds and 3 steals off the bench. The rookie matchup was even, with both Mobley and Barnes totaling 11 points. Mobley finished with 8 rebounds, 1 assist and 3 blocks, whereas Barnes grabbed 6 rebounds, 4 assists, 2 steals and 1 block.

Cleveland’s defense came out strong from the opening tip, forcing the Raptors to miss six of their first seven shots of the night. However, Toronto quickly responded and finished the first quarter with a 25-17 lead. By halftime, the Cavs trailed by 10 points. At one point in the second half, this lead was cut to just a difference of 5, but Cleveland couldn’t complete the comeback.

On March 26, the Cavs hosted the Bulls, a team similarly in a late-season slump, having won three of their last 10 games, causing them to slip down the rankings. With the Eastern Conference playoff race tightening, this was a must-win for the Cavs. Unfortunately, the Cavaliers’ end-of-season slump continued as they narrowly fell 94-98.

The Bulls’ All-Star duo of Zach LaVine and DeMar DeRozan scored 25 and 20 points, respectively, in a key win to maintain the fifth seed. Garland had a nice all-around game, finishing with 28 points, 6 rebounds, 5 assists and 2 steals. Cavs guard Caris LeVert finished his second start in a Cavalier uniform with 17 points, 5 rebounds and 3 assists.

The first half was forgettable for the Cavs as they were held to just 35 points, allowing Chicago to grab an 18-point lead. Though Cleveland trimmed the lead to 3 points in the second half following a 3-pointer and a dunk by LeVert, their abysmal shooting put victory out of reach. The Cavs shot 22.6% from beyond the arc, 70.4% from the free-throw line and 41.5% from the field. The Cavs’ youthfulness was no match for the Bulls’ wealth of experience, as the latter secured their lead for the victory. Following this game, Cleveland had a record of 41-33 and fell to the seventh seed, seemingly relegating them in the play-in tournament unless conditions improve.

The Cavs then hosted the Orlando Magic, who claim the worst record in the East at 20-57, on March 28. Propelled by Garland’s 25 points and 12 assists, the Cavs beat the Magic 107-101. Markkanen contributed with 20 points, and forward Kevin Love added another 19 points and 7 rebounds off the bench. Orlando had 7 players scoring in double digits, led by center Wendell Carter Jr. with 15 points, 12 rebounds and 6 assists. Though the Magic achieved a better field goal percentage, grabbed more rebounds and finished with more assists, the Cavs’ stellar defense and free throw shooting brought them the win. As a team, the Cavs made 20 of 23 total free throw attempts, stole the ball 11 times and finished with 4 blocks.

The first half went the Cavs’ way as their lead exploded to nearly 20 points. However, midway through the second quarter, Mobley sprained his ankle when trying to contest Franz Wagner’s layup, forcing him to leave the game. Orlando capitalized on this loss and cut the Cavs’ lead to single digits at the half, 60-53.

In the third quarter, a three by Magic’s Cole Anthony tied the game 62-62. The rest of the third quarter was a back and forth battle, but early in the fourth quarter, Orlando claimed a 4-point lead. Late in the game, a three from the top of the arc by Markkanen and an off-balanced mid-ranger by Garland pulled the Cavs ahead by 5. Garland then hit a step-back 3 and found Markkanen for an alley-oop to secure the victory.

Despite recent struggles, this season has still been a remarkable one for the Cavaliers. The win against Orlando marks the 42nd win for Cleveland this season, making this the city’s first winning season without LeBron James since 1998. They now sit at the seventh seed in the East with a record of 42-33, just one game behind the sixth-seeded Toronto Raptors and fifth-seeded Chicago Bulls. The Brooklyn Nets trail the Cavs by just three games, but with Kyrie Irving now eligible for home games after New York City Mayor Eric Adams lifted the vaccine mandate for performers and athletes, the Nets have a good chance of surging into the top six of the Eastern Conference and clinching a spot in the playoffs. Even with Cleveland losing Mobley on top of Allen, they must finish the season strong to secure a playoff spot, or else they may have to fight for it in the play-in tournament.