Cavs retooling for the new season 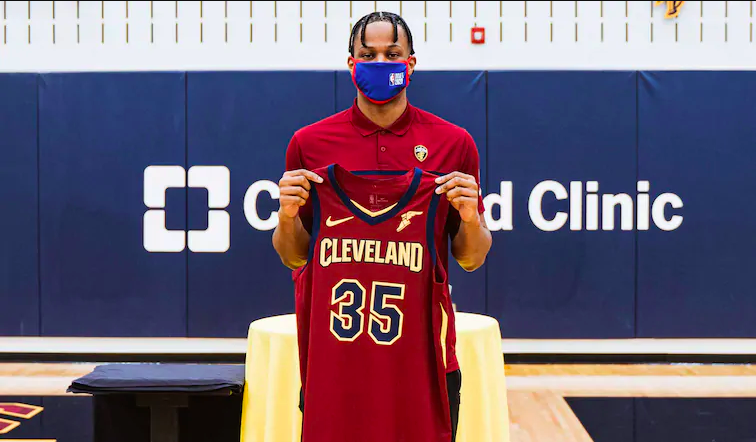 Courtesy of the Cleveland Cavaliers

First round pick Isaac Okoro, an athletic wing, should help fill a position the Cavs are in desperate need of.

After the NBA season ended in mid-October, the front offices of all the teams went to work rebuilding and retooling their teams for the next season. With the league restarting on Dec. 22, this short offseason meant the Cleveland Cavaliers were making rapid moves to bolster their roster. The Cavaliers have been in a rebuilding phase ever since LeBron James left—and this was made all the more apparent by their moves this offseason.

As the first official day of player transactions opened, center Andre Drummond picked up his player option and opted to remain with the team to the tune of $28.7 million.

Then came the 2020 NBA Draft, where the Cavs again had a prized No. 5 lottery pick. With their lone pick, they selected a 6-foot-6-inch athletic wing defender out of Auburn University, Isaac Okoro. Okoro was touted as one of the best wing defenders in this year’s draft class and would fill a sore need at the Cavs’ wing position, which had barely any depth behind Cedi Osman. Scouts raved about his raw athleticism, soft touch at the rim and ability to guard multiple positions.

The team also made other signings and trades to improve their rotation. Forwards Alfonzo McKinnie and Jordan Bell were traded to the Los Angeles Lakers for center Javale McGee. McGee will help fill the void left by Tristan Thompson, who left the team to play for the Boston Celtics. The team also re-signed fan favorite point guard Matthew Dellavedova, who provides depth at the backup guard positions behind Collin Sexton and Darius Garland. The teams also signed forward/center Thon Maker to a non-guaranteed deal to compete for a spot on the roster for more depth.

This Cavaliers’ team is one that is undoubtedly going in the right direction in the rebuilding process. The team now has decent pieces in every position and strong veteran presences in Kevin Love, JaVale McGee and Andre Drummond to guide the young core. While this team may not make the playoffs this year, they’ll continue to get better, and should do better than last year with new coach J.B. Bickerstaff at the helm. If Okoro can develop into a strong all around player, and guards Sexton and Garland can take the next step, the team has a shot at returning to the playoffs in the future.

With less than a month until the new season, both the Cavs and their fans will be anxiously awaiting what lies ahead.