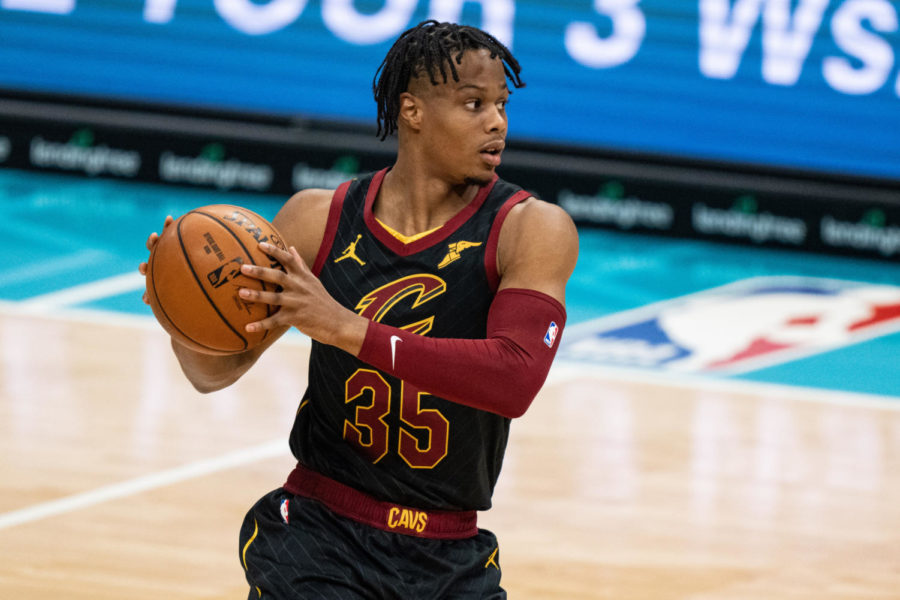 Forward Isaac Okoro (pictured) secured a Cavalier victory with a last-minute steal and game-winning dunk against the Brooklyn Nets.

The Cleveland Cavaliers have been on quite a hot streak. On Friday, Jan. 14, the Cavs traveled to San Antonio where they faced the Spurs, eventually beating them in a close game, 114-109. Guard Darius Garland led both teams with 32 points to go along with 8 assists and 4 rebounds. With the loss, the Spurs’ losing streak was extended to five. On the Cavs, center Jarret Allen finished the game with 17 points and an impressive 16 rebounds. Center Evan Mobley added 15 points and Lauri Markkanen put up an additional eight points. For the Spurs, guard Dejounte Murray had a whopping 30 points, 14 rebounds and 8 assists, with Keldon Johnson adding 18 points and Bryn Forbes put up another 15 points. The Cavaliers shot 53% from the field in the first half of the game, where they led in scoring in the first quarter. The first three quarters of the game were mellow, with back and forth alley-oops, dunks and 3-pointers. In the final five minutes of the third quarter, San Antonio went on a 15-6 run and took their largest lead right before Cavs star forward Cedi Osman made a 3-pointer at the shot clock buzzer to bring Cleveland within two points of the Spurs. The Spurs’ momentum was snapped and, in the final quarter, the Cavaliers fought back to win by five.

After defeating the Spurs, the Cavaliers ventured to Oklahoma City where they took on the Thunder and ground out another close game victory of 107-102. Garland led both teams with 27 points and a career-high 18 assists as the Cavaliers overcame an 18-point deficit to extend their winning streak to four games. In addition, Mobley scored 20 points and Allen added 13 points and 13 more rebounds. For the Thunder, guard Shai Gilgeous-Alexander led with 21 points and 7 assists. Throughout the first half, the OKC had control, shooting an impressive 49% from the field compared to Cleveland’s 38%. By halftime, the Thunder led the game 56-46 and extended their lead 74-56 within the opening minutes of the third quarter. The Cavs continued their aggressive push and closed the margin to single digits by the start of the fourth quarter. With 11.4 seconds left in the fourth quarter, Lauri Markkanen made a clutch 3-pointer to secure the Cavalier’s victory.

After a long road trip, the Cavaliers arrived back home to face the Brooklyn Nets on MLK day. The Nets were without Kevin Durant, who is out for 4-6 weeks due to an MCL sprain in his left knee. The Cavaliers had some strong performers in this impressive 114-107 victory, with Garland scoring 22 points with 12 assists, forward Isaac Okoro adding another 15 points and Allen had 14 points and 10 rebounds. With their win against the Nets, the Cavs extended their win streak to five straight wins.  On Brooklyn’s end, guard James Harden scored 22 points and 10 assists and Kyrie Irving had a strong 27 points and 9 assists. The Cavaliers dueled with the Nets for most of the game, going back and forth with changing leads. The Nets missed several key shots throughout the game, costing them the lead, but they were only down 110-107 with less than a minute left in the game. At the end, a costly turnover from Harden led to Okoro’s game-sealing dunk. The Nets were hoping to have their star trio of Durant, Harden and Irving finally all play together, but Harden and Irving will have to wait several weeks for Durant’s return.

The Cleveland Cavaliers currently rank sixth in the Eastern Conference with a record of 27 wins and 19 losses. So far this season, the Cavs have been performing rather well, as the core of the team has been molded around the younger stars such as Osman, Allen and Mobley. There have been some challenges with the point guard position, as key pieces Collin Sexton and Ricky Rubio are out indefinitely. In their absence, the Cavaliers traded forward Denzel Valentine for veteran guard Rajon Rondo to fill the vacancy. Overall, the Cavaliers have improved on their previous year’s performance, with budding stars Garland and Allen playing at an All-Star level with hopes of propelling the team to the playoffs in April.