Cavs vs. Nets: A firsthand experience 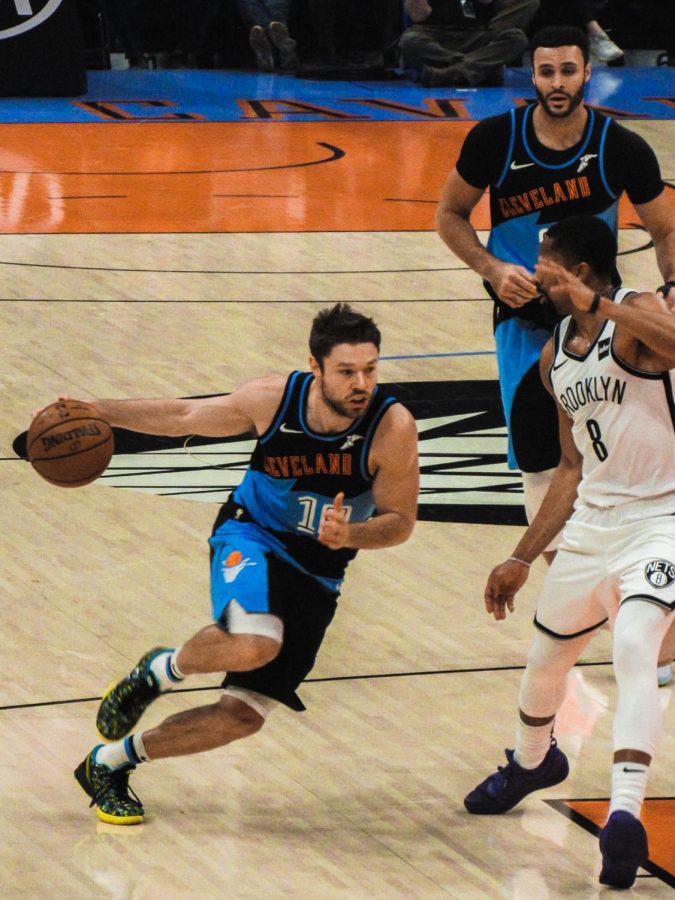 Matthew Dellavedova drives the ball up the court during the Cavaliers game.

In a game that went down to the wire, the Cleveland Cavaliers fell to the Brooklyn Nets 108-106. The Cavaliers were coming off a close home upset six-point win against the Portland Trail Blazers. The Cavaliers were sitting in fourth place in the Central Division with a 5-11 record, while the Nets were also ranked fourth in the tougher Atlantic Division with an 8-8 record. Coming into the game, key players from both teams were injured. The Nets were without guards Kyrie Irving and Caris LeVert, both of whom are starters for the team, as well as center DeAndre Jordan. Kevin Love was a gametime scratch for the Cavaliers due to a lower back contusion. Love was present during the team’s shootaround but was ruled out afterwards. Coach John Beilein said that Love had been through therapy all day and was not completely ready to enter come gametime.

From the tipoff, the game was a close one with both teams going back and forth on the scoreboard. Neither team was looking to push the pace too much, instead deciding to play their half court games. For the Nets, Joe Harris had 7 points at the end of the quarter from a couple of strong layups and a three pointer. Collin Sexton led the Cavaliers in scoring with six points at the end of the first quarter, but was 3-8 on the field and wasn’t able to convert on three pointers or finish over the Nets’ interior defense. Kevin Porter Jr. checked in and brought momentum to the Cavaliers at the end of the first quarter with a strong dunk over the Nets. The Cavs held a one point lead as the quarter ended.

In the second quarter, the back and forth continued with no team making a clear difference. Nine lead changes occured in the quarter. Collin Sexton continued to struggle, going 0-4 from the field during the period, and stayed with 6 points scored. For the Nets, Joe Harris, Taurean Prince and Spencer Dinwiddie each had double digit scoring figures.

During the third quarter, the Nets seemed to begin to pull away. Spencer Dinwiddie continued to play well for the Nets, leading all scorers with 19 points and helping out his teammates with 6 assists as well. Collin Sexton continued to have an inefficient night, going 5-18 and putting up 12 points. Larry Nance Jr. and Cedi Osman were bright spots for the Cavaliers, scoring an efficient 16 and 13 points, respectively. The Cavaliers ended the quarter down 6, 81-75.

The fourth quarter consisted of runs made by both teams. The Cavaliers started behind but brought the game to as close as 2 points. The Nets then stepped ahead, and, with around two minutes to go, the Nets were up 9, 106-97. The Cavaliers then responded as Collin Sexton converted a tough 3-point play, which was followed by a Jordan Clarkson layup and 3-pointer to make it a one point game with a minute left in the game. With a stop, the Cavaliers let Collin Sexton make a play and, after getting fouled on a layup, Sexton was able to convert only one out of the two free throws to tie the game up. On the second free throw, the Cavaliers recovered the rebound and called a timeout. On the following play, they were unable to get a shot off as Spencer Dinwiddie blocked a 27-foot 3-point shot as the shot clock expired. With 6 seconds left in the game, the Nets gave the ball to Dinwiddie and, with 1.2 seconds left, Dinwiddie rose up over the defense to nail a 22-foot pull up jumper that gave the Nets the lead to seal the game. The Cavaliers suffered a tough loss with the final score of 108-106.

After the game, Cavaliers coach John Beilein talked about the loss, saying, “We could get to the rim but we couldn’t finish there … It’s good to get the hundred and six points that we go … without really getting much to basket.” Big men Jarrett Allen and Noah Claxton had a combined five blocks and guard Spencer Dinwiddie had three blocks himself. Speaking about Allen’s nine offensive rebounds and 21 total rebounds, Beilein said, “[He’s] so big, even if we got a guy underneath and that happened several times … he’s just so big, he just put it in.” Despite a rough 7-22 shooting night, Collin Sexton scored 18 points and hit a tough layup while drawing a foul to help the Cavaliers in the 4th quarter. When asked about Collin Sexton’s off-ball movement, Beilein said, “I think he’s still, it’s still something that he is working through … I think his comfort level is with the ball in his hands.” Being a ball-dominant point guard in college, Sexton needs to be more effective to become a more efficient and effective scorer in the NBA.

The Cavaliers continue their season with a game at home against the Orlando Magic on Dec. 6, followed by two road games against the Philadelphia 76ers and the Boston Celtics.