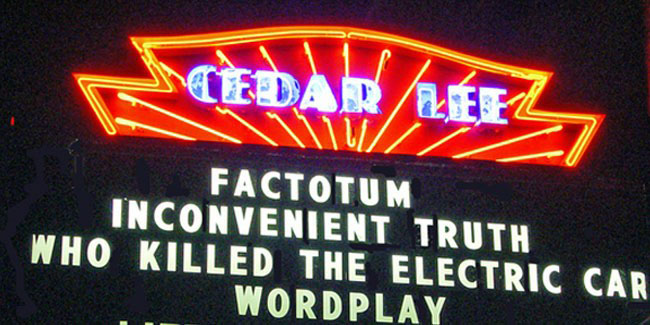 The Cedar Lee Theatre, located at the corner of Cedar and Lee Streets, offers an eclectic range of films local, foreign and everything in between.

The Cedar Lee Theatre has long been considered a top destination for Northeast Ohio’s film fanatics. Many art films and foreign films that can’t easily be seen elsewhere in the state inevitably surface on one of the Cedar Lee’s screens. If this seems to lend an air of highbrow elitism to the establishment, let it be said: there is more to this venue than meets the eye. For indeed, in amongst the scheduled indie dramas and ballet broadcasts, the Cedar Lee also plays host to monthly showings of a variety of cult classics.

Perhaps foremost among these in the eyes of the modern college student is the 2003 film, “The Room”, which is shown on the second Saturday of every month at midnight. No attempt at plot summary can do justice to its strange mélange of bad writing, bizarre direction, and unintentionally hilarious acting—it simply has to be experienced to be understood, and even then, it’s barely comprehensible. Screenings of the film have increasingly added a new element to the “The Room” experience by getting the audience more engaged with the film itself. To those who have seen the movie many times—and this is the sort of film people tend to re-watch—seeing it in a theater with fellow audience members is the perfect encouragement to develop rituals similar to those familiar to fans of “The Rocky Horror Picture Show”, such as bringing plastic spoons to throw whenever a spoon is visible onscreen.

Speaking of “The Rocky Horror Picture Show”, you can see that at the Cedar Lee as well, on the first Saturday of every month. Famed as the quintessential audience participation film, these midnight showings are no exception; showing up in costume even gets attendees a discount on the cost of admission! The film is accompanied by live performances by Simply His Servants, a local Rocky Horror floorshow group that has enjoyed a 24-year relationship with the Cedar Lee. The participatory nature of the movie, including the list of props brought (or purchased at the venue) by audience members, might seem a bit intimidating to newcomers, but Simply His Servants have a page on their website dedicated exclusively to Rocky Horror etiquette, covering everything from what direction rice should be thrown in, to whether a supersoaker is the same thing as a squirt gun. (It all makes sense in context, really.)

In addition to monthly showings of the films mentioned above, the Cedar Lee, along with the Capitol Theatre on Cleveland’s west side, presents midnight screenings of a variety of comedies, cult films, and curios on Fridays and Saturdays throughout the year. Known as “The Melt Bar and Grilled Late Shift”, these films are run in conjunction with special sandwiches offered by Melt, with ingredients often loosely related to the films themselves (for example, a showing of “M.A.S.H.” was accompanied by a Korean barbeque grilled cheese sandwich). Upcoming films in this series include “Legend” at the Cedar Lee on August 23, and “Labyrinth” at the Capitol on August 17, but a list of all upcoming movies for the next few months can be found on the theater’s website.

Travelling throughout Cleveland can be daunting to students, from the freshest of freshmen to the most seasoned graduate students, but the Cedar Lee is well within access of the Case campus. It is located (as its name suggests) near the intersection of Cedar Road and Lee Road, which is a fairly short drive away by car, but which can also be accessed via the 32 bus line of the Cleveland RTA. If you find yourself on campus on a Saturday night, sitting around with nothing to do, a short trip with your friends for a cheesy late night movie might be just the thing to liven up your weekend.