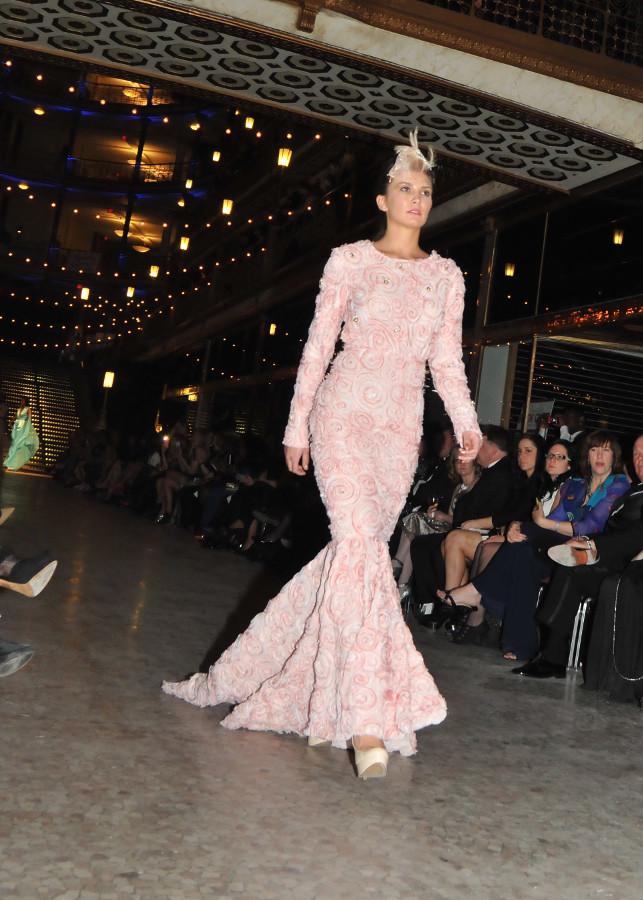 Fashion Week Cleveland closed out this past Saturday night, March 21, with its final event, the runway shows. It was a night of beautiful, glitzed-up gowns worn by both the models and the audience, as Cleveland’s fashion-minded pulled out all the stops. With eight talented designers showing collections of at least eight pieces each, Cleveland debuted what the city has to offer to the fashion world.

The event began with a reception at The Arcade downtown, where guests with VIP status were able to have complimentary champagne and small appetizers, browse some of the merchandise and bid on the silent raffle. The raffle highlighted how much of a community event Fashion Week in Cleveland really is; nearly all of the prizes were donated by local enterprises, including but not limited to the following: The Cleveland Browns, The Cleveland Cavaliers, The Cleveland Indians and the Rock and Roll Hall of Fame, which donated a guitar signed by all of The Rolling Stones.

As guests poured into the area surrounding the makeshift runway, one of the founders, Donald Shingler, spoke about the reasons for Fashion Week Cleveland. The 11-year tradition has gained success in its ultimate mission of making a retail district in downtown Cleveland.

Alumni of Case Western Reserve University, Christine DeBaz and Jackie Cheng, were active volunteers for the event this year and highlighted the sense of community that surrounds the event. They both said that they most enjoyed befriending other volunteers and event workers.

When it came time for the actual fashion shows around 10:30 p.m., a total of eight designers got their chance to present their work, some for the first time ever. This year’s designers included Victoria Cohen, DeAndre Crenshaw, Johnathan Dembowski, Christian and Christopher Lett, Cora Mercer, Chikondi Butao Mielemba, Bridgette Schriner and “Project Runway” designer Althea Harper. All designers had varying aesthetic and varied from men’s to women’s wear. Cohen and Lett were the youngest of the designers and are still attending high school.

Some notable collections were those of Mielemba, Crenshaw and Harper. These designers had immaculately polished looks, each portraying a different aesthetic. Harper’s model was a free spirit, confident in her sensuality. The simplicity of the design only highlighted her unique pieces, which included loose silhouettes as well as fun and flirty colors that included light pale blue patterns and vibrant pinks.

Mielemba, a designer from Africa who is quickly gaining recognition in the U.S., had a starkly different design mentality. The woman she dressed in her collection was similarly strong like Harper’s, but this was highlighted with sharp clean lines and more structural designs. This idea of power was often juxtaposed against some of the bindings she placed in interesting locations on her garments, such as the back of an extreme high-low top and the legs of her cropped pants. The strategic placement of the visually constraining fabrics effectively gave the model a strong identity of power.

Crenshaw’s collection is best described as a collaboration of the previous points of view. Crenshaw used highly feminine fabrics in his eveningwear collection, many of which played with sheerness and handmade textures. This femininity of the fabrics was contrasted with the strong emotional sense of independence and strength from the formfitting structure of the garments.

After the show, Crenshaw was able to speak firsthand on what he wanted his designs to represent.

“My influence was life and growth; growing into something that you couldn’t have possibly dreamt of,” he said.

This is a reflection of his own growth in the last year, as he has had to push himself to achieve his dream after having to leave school. He decided not to let his current limitations stop him from going after what he really wanted to do, something he seems to have achieved last Saturday.

Fashion Week Cleveland has only grown in popularity and size in its 11 years of existence. It was regarded by Women’s Wear Daily, the premier fashion industry newspaper as “the nation’s third largest fashion week after New York and Los Angeles.”