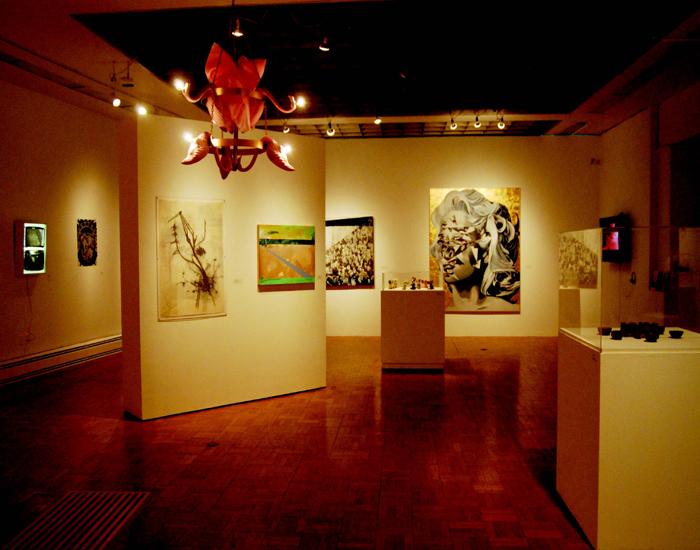 The themes of celebrity, consumerism, and the anxiety caused by our post-industrial culture-hungry society are some of the most commonly speculated topics in the art community today. However, students at the Cleveland Institute of Art have explored these topics independently of the press, and individually seem to have gravitated towards these themes when considering what works to submit for the 66th annual student show.

The Cleveland Institute of Art is currently hosting its 66th Student Independent Exhibition, which will run until March 17. The exhibition opened this Friday, Feb. 17 to a large crowd waiting in the packed hallways outside of the Reinberger Galleries. Hundreds of students from all majors and years at CIA submitted work, but only 50 students were selected this year to install their pieces in the exhibition.

The artwork in this year’s show was juried by three widely known national artists: Stephanie Craig (ceramicist), Ben Grasso (painter), and Brent Green (filmmaker and installation/performance artist). Themes stressed in the exhibition relied heavily on narrative and the importance of the story within each piece. This was in part evinced by a recorded message from the jurors to the audience, played at the beginning of the exhibit near a faux fairytale set, erected to announce the title of the exhibition. The coherency of the work in the 66th exhibition begs the question, which pieces did the jurors select first? Which inspired what the rest of the show was based on?

This year, works chosen for the exhibition exposed a fearful critique of pop-culture, questioning the place of the artist in the scope of an entertainment world based on wit and sharpness. A highlight of the exhibition, and first place winner of the CIA Board of Directors award and the David and Ann Deming award, Tyler Zeleny’s “The Hero Attempts to leave Earth Forever After Being Defeated by the Celebrity” and “The Consumer Births the Celebrity” mythologized contemporary social archetypes. These works chosen for the exhibition are just two of a collection of characters which Zeleny labels under “The Pantheon,” a set of characters devoted to narrating the process of creation at a commercial level.

Ryan McDaniel, winner of the Sculpture Center award and the Ann and Albert Albano award, debuted an installation titled “Anxiety,” consisting of several hundred lunch bags filled with his own breath. Once inside the small enclosed space, the piece resonates with the artist’s phobic title and the smell of crisp brown paper. We begin to feel the weight of Ryan’s breath pushing the edges of the brown paper bags as if they are about to burst in unified harmony. Post-modern/modern/minimalist works like this allow the imagination to spill into an adventurous state of the artist’s intention and create individual experiences with the art.

Fear and anxiety in respect to the artist’s place in pop-culture critique, themes noticeable throughout the exhibit, are apparent in other pieces such as Dan Shinkle’s “…And it Swallowed Me Up,” a photograph of a sculpture that encapsulates the viewer in a ceiling of jagged steel.

Debbi Christensen’s “The Ballad of the Farmer in the Deli,” winner of the Museum of Contemporary Art award and the Cleveland prize, is a small book portraying the crisis of a farmer’s life in the country being stripped from him and his eventual arrival in the city as a diner cook. Christy Watterson’s “Containment,” a claustrophobic drawing of entrapment, and Andy Hunt’s “Icon I,” a mash-up of Madonna’s face through the dissection and displacement of the mouth, eyes, and lips, are other examples of the heavily manicured theme.

One final piece that grounds the exhibition and creates a conclusion in the midst of the chaotic and disruptive forces of social misery is Mia Manuela Ortega-Grey’s “To My Home,” a three-piece enamel set of pre-apocalyptic images that draw the viewer through a narrative of nuclear plants and refineries pouring steam into the sky. “To My Home,” though one of the first pieces presented in the show, creates a looming presence of destruction and doom with hope of a solution which stayed with viewers through the entire experience of the exhibition.

Media ranged from paint, pencil, enamel, and ceramics to installation, sculpture, and film. The opening reception provided a lush gathering of artists, collectors, funders, students, and faculty with music, food, and wine. Amid the hustle and bustle, student artists were on hand to explain their work and plan studio visits with interested clients.

The S.I.E. show will be open for a month, Monday through Saturday 10 a.m. to 5 p.m. and Friday until 9 p.m. Admission is free to the public.