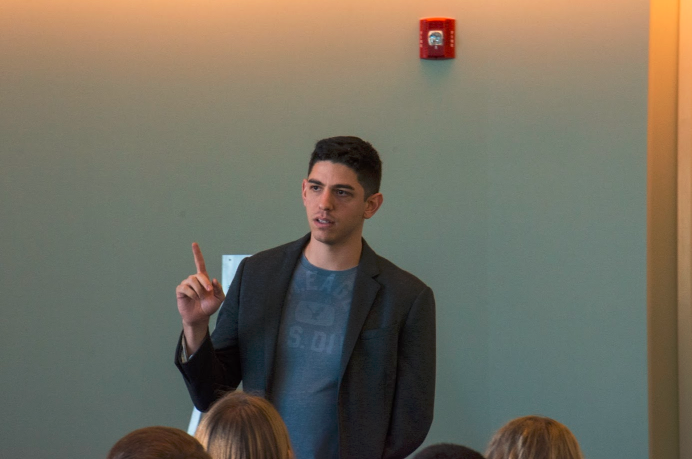 This past Sunday, Nov. 6, the Radical Student Union hosted a screening of the Israeli documentary “The Law in These Parts,” which clashed with Chabad Student Group's event featuring the Israeli Defense Forces (IDF) veteran Izzy Ezagui. Both organizations recognized that this arrangement provided students opportunities to hear from different views.

This past Sunday, Nov. 6, the Radical Student Union (RSU) at CWRU hosted a screening of the Israeli documentary “The Law in These Parts” that clashed with an event planned by Chabad Student Group at CWRU, which featured the Israeli Defense Forces (IDF) veteran Izzy Ezagui as speaker. The documentary RSU showed discusses courts operated by the IDF in the West Bank. Both events began at 2 p.m. and were located in adjacent ballrooms of the Tinkham Veale University Center; each event was attended by 40-50 people.

Neither group has an official stance on the Israeli-Palestinian discord. According to representatives from RSU and Chabad, both want to provide CWRU students with information and choices on the dispute.

Chabad is a religious organization on campus that supports Jewish students. The group decided to bring Ezagui to speak on campus a week after—and in part as a response to—RSU’s screening of the documentary, “The Occupation of the American Mind,” earlier in the semester. The film discusses the IDF and media in the United States. During his time in the IDF, the American-born Ezagui lost his arm in battle and still returned to duty; he now works as a motivational speaker.

“A CWRU student walks into TVUC and there are two sides to the story,” said Gabriel Murcia, founder and president of the RSU. “If they want one side, they can go into this room and if they want the other side, they can go into this room. We’re providing that choice, and I think it’s important to point out that it is the first time at CWRU that someone has provided that choice in a really long time.”

According to RSU Secretary Jaimee Miller, the group became aware of Chabad’s event about two and a half weeks prior and began to plan the film screening. Chabad members learned about RSU’s film screening a few days before the two events took place.

“At first everybody was a bit surprised, but thinking about it, it was obviously a good tactic to combat whatever we’re trying to do to have an event at the same exact time to pull away people who might have come to our event to go to their event,” said Zane Braslawsce, a second-year student and member of Chabad. “We would have liked to have had some of those students who went to see the video get that other perspective and come to our speaker as well.”

Both Chabad and RSU expressed a willingness to meet in a shared discussion. Braslawsce suggested that someone who isn’t in either group could moderate; he saw dialogue as a way to make the “conflict dissipate.”

According to Murcia, RSU was founded in fall of 2016 as a voice on campus against capitalism and imperialism, something which he saw as lacking on campus, but the group did not plan on focusing on the Israeli-Palestinian dispute. He does not see RSU as a pro-Palestinian group, but after witnessing the reaction to their first screening this semester by various on- and off-campus groups, he does see it as RSU’s role to provide Palestinian viewpoints for students.

RSU was placed on a watch list by the AMCHA Initiative, which, according to its website, monitors anti-Semitism at universities in the United States, after they showed the first film earlier this semester. An open letter to President Barbara Snyder from pro-Israeli group Israel’s CWRU that raised concerns about the film and the campus’s reaction to it was printed in The Observer.

According to Braslawsce, some students were concerned after the initial film screening that RSU was attempting to push a Boycott, Divestment, Sanctions movement (a pro-Palestine campaign aiming to increase political and economic pressure on Israel) at CWRU. A previous letter written by President Snyder and Provost William Baeslack in 2013 outlined their reasoning for why CWRU would not partake in that movement.

Miller believes that RSU would host future events on the Israeli-Palestinian conflict. She was not at the event on Sunday but was rather attending a national conference of the National Students for Justice in Palestine (SJP), a pro-Palestinian organization. According to her, SJP is considered a terrorist organization by Hillel, a national organization that provides support and networking for Jewish students.

Miller will be the vice-president and is a founding member of the new Students in Solidarity for Palestinian Human Rights (SPHR), which will be a pro-Palestinian organization that promotes the rights of Palestinians on campus. The group is currently undergoing the process of approval by the Undergraduate Diversity Collaborative, and, since late October, has been active on Facebook and Twitter. According to Miller, a pro-Palestinian group used to exist on campus in the late 2000s.

“I feel intimidated, and this is very common,” said Miller, with regard to her role in SPHR. “There are entire watch lists for students that compile where they live, where they work, things that they have said out of context, close friends…. I’ve not gotten any peer-to-peer intimidation, but I’ve definitely gotten a sense of, ‘This isn’t welcome on our campus and we’ll do whatever it takes to keep it that way.’”

Miller stressed that members of Chabad were courteous to her and other members of RSU. She felt that while they differed in opinion, the ideological disagreements between members aren’t personal. Sarah Glieberman, vice-president of Chabad, was happy to see “peaceful communication” between the groups despite their opposing viewpoints.