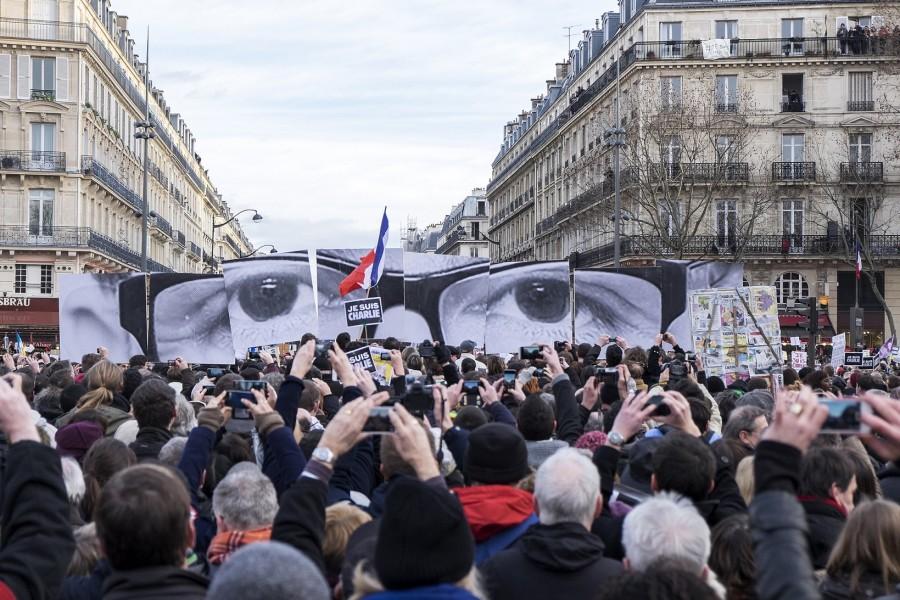 When the now-notorious gunmen, Cherif and Saïd Kouachi, burst into the offices of satirical magazine Charlie Hebdo on Jan. 7, they not only triggered three days of terror for France that left 17 victims dead; they also left the world in a state of shock.

“The first thing that I thought was that it was going to be the 9/11 of France,” said Celeste Engel, a Case Western Reserve University student. She was in France the day of the attack, visiting her family in the suburbs.

The next couple of days were filled with grief and unexpected consequences. #JeSuisCharlie, or #IAmCharlie, was shared on social media sites, uniting people around the world in support of the magazine and its victims. There was also #JeSuisAhmed, in support of the Muslim cop who lost his life during the shooting.

And then there was the march on Jan. 11, when world leaders and millions of people joined hands in Paris in memory of those who had lost their lives. But some of the most lingering consequences of the attack were the discussions that occurred post-Charlie Hebdo, the discussions on freedom of speech, on Islam, on the state of Muslims around the world and on satire.

On Jan. 16, the Religious Studies Department held a forum in Tomlinson Hall to discuss topics ranging from Islamophobia to the limits of satire. After the Charlie Hebdo attack, several Muslims were targeted and some violently attacked.

Engel heard of a story where one Muslim man was denied a job just for being Muslim.

“I think it’s going to be a real problem in the next few years,” she said.

In response, a large number of Muslim journalists, leaders, and scholars wanted to make it clear that the perpetrators of the attack are not considered Muslims and that these attacks are condemned by the Muslim community, especially by the community in France.

The reality of the attack, however, sparked discussion over the limits of satire and whether there are any. Religious studies professor Jonathan Tan provided context about European societies to fully explain the place of satire in France.

He and Engel seemed to agree that there is a notion of “laïcité,” which means that the French society is a “secular society.” There is an absence of religion in politics. Although American society also values a separation between church and state, there is still a difference.

This “laïcité” concept in France is a result of the Enlightenment period, when religion was seen as a subculture. Engel furthered the definition of “laïcité,” saying, “Religion doesn’t really have a really big importance in politics or in school.” In other words, being French is the most important thing when it comes to identity.

“You cannot make fun of the faith of others,” Tan said. “Charlie Hebdo could have easily critiqued the terrorists without dragging in the Prophet Muhammed.”

For Christianity, for example, the magazine often depicts the pope rather than Jesus.

“It’s very inconsistent, these things that are being practiced,” he added.

Mahima Devarajan, managing editor of CWRU’s humor magazine The Athenian, shared her own thoughts about the value of satire. Satire, she said, is not just for humor.

“Satire points out flaws and inconsistencies that show up anywhere,” she said. “It makes you laugh and then makes you think.”

The Athenian aims more at relieving the stress CWRU students experience during their college career. It’s generally for laughs. But the magazine is still a staunch supporter of the right to speak freely.

“Everybody’s opinion, even if it is stupid, is valid,” she said.

There are different sides, stories and arguments. It’s all about perspective. Tan likes using an Indian folktale to describe this concept:

“There are four blind men, and they have an elephant and each blind man only recognizes a part of the elephant but not the whole thing. So focusing either on the victims or the ideological grievances, it’s just one picture.”

One picture. One world. One large, active discussion.