Chasing a line through mediums 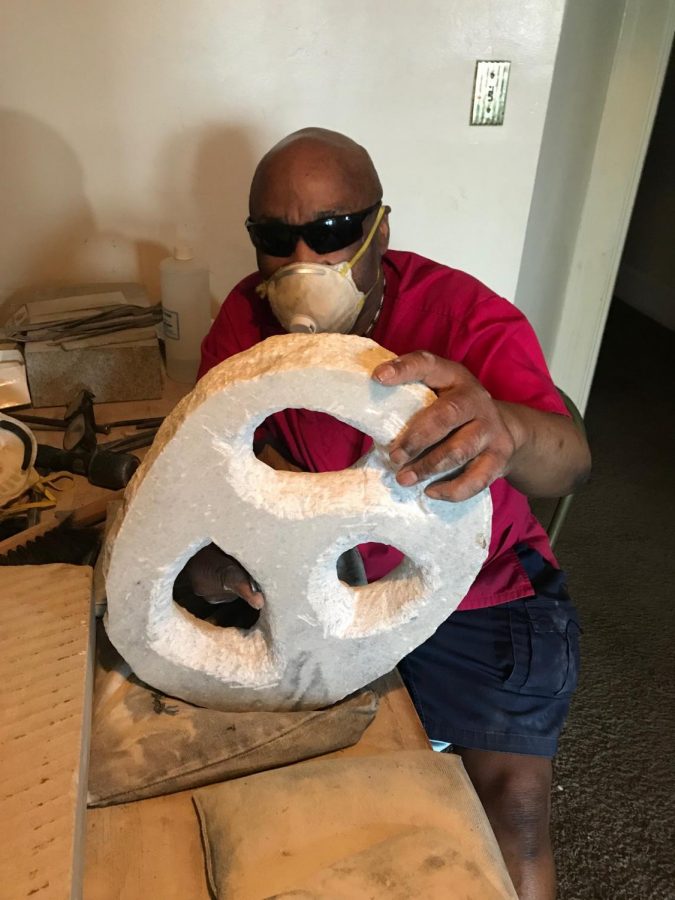 Chappelle Letman’s dust-covered hands glide over his latest sculpture, his fingers touching every crack and crevice. After feeling the appropriate spot, the 68-year-old grabs his hammer and chisel and cuts away, creating puffs of white dust with a rhythmic banging of metal ripping away stone.

His work has been displayed in galleries all across Northeast Ohio, but he has never seen any of his pieces.

“I lost my sight in 1992 to glaucoma [and] my mother died two days later,” said Letman. “I was wondering how I could keep working. I was doing book illustrations, teaching here and there, drawing landscapes and urban scenes in New York City. Jazz paintings and jazz drawings in nightclubs. One morning I woke up, and my sight was gone.”

“My father used to be able to draw too and one day he drew a line and I was impressed by that,” said Letman. “Ever since then I’ve tried to copy that line.”

After losing his vision, Letman left New York and went to Los Angeles to attend the Braille Institute. There, he looked for a new way to create. Sculpting, with its tactile nature, came to Letman as naturally as swimming comes to a fish.

Letman’s sculptures are naturalistic, dominated by curves instead of sharp edges.

Letman cites local artist Kim Bissett as a key friend and mentor. They met when Bissett taught a sculpting class at the Cleveland Institute of Art in 2001.

“In the second week of class, 9/11 happened. I had to call every member of the class and I don’t know why but I saved Chappelle’s call for last. The first six or seven calls were rather business-like. I got to Chappelle and said the same thing I said to everyone else,” said Bissett. “There was a long silence and Chappelle said ‘you really feel this don’t you,’ and we both broke down crying. We talked very personally and that was the beginning of our friendship.”

Taunya Cook-Clayton met Letman when she was a model in Bissett’s class. She remembers disbelieving that Letman was blind when they met, at first thinking that his blind cane was a joke.

Letman made a piece in honor of Cook-Clayton that was purchased by the Cleveland Clinic Art Department. Letman’s sense of measurement and knowledge of the human form is unmatched. When working on the piece he could figure out Cook-Clayton’s bone structure and body shape effortlessly by with a few non-invasive touches.

“His memory is better than other artist’s eyesight,” said Cook-Clayton. “Working for Chappelle is like walking through a beautiful summer garden. Other artists depend on their eyesight; he depends on his memory.”

Letman has plenty of memories to draw from in his life. He once sold a painting to jazz trumpeter Miles Davis. He used to drive in cross country races from New York to San Francisco. He lived in Alaska for several years where he learned how to drive a dog team and saw the northern lights fly past him among the glaciers.

Even though he cannot paint landscapes or scenes of jazz clubs anymore, Letman said he now has more freedom than when he was a painter.

“When I was painting, I was a realistic painter and it was tiring. They have cameras for that,” said Letman. “I’m freer with my work. These shapes and forms come from visions I have, my dreams and what I feel from people.”

Letman works six to eight hours a day on his work with an incredible attention to detail.

“As you spend time with him, you realize that he plans every stroke,” said Cook-Clayton.

Despite his work ethic, he is not an ascetic monk focusing on his craft while ignoring the outside world. The most striking thing about spending time with him is how many phone calls he gets from friends in his Old Brooklyn apartment.

What draws him to the blank stone now is the same sense of freedom that first drew him to a blank canvas when he was younger. His technique may have changed, but a line, like the one his father drew, connects his two artistic lives across mediums.

“I do what I do and I enjoy it,” said Letman. “It goes beyond materialism and having this and having that. I’m thankful that I can keep creating.”

Aspects of his work that may seem like mistakes, such as pieces of unpolished stone, are often deliberate choices by the artist.

“If you see human errors, those errors are usually intentional,” said Letman. “I don’t want perfection in a piece. Some things I’ll just leave. I don’t try to polish this up or shine this up or sand this up. Let it be.”