Check out “Neon Genesis Evangelion” for its complex psychological themes

Streaming recommendation of the week 3/18/22 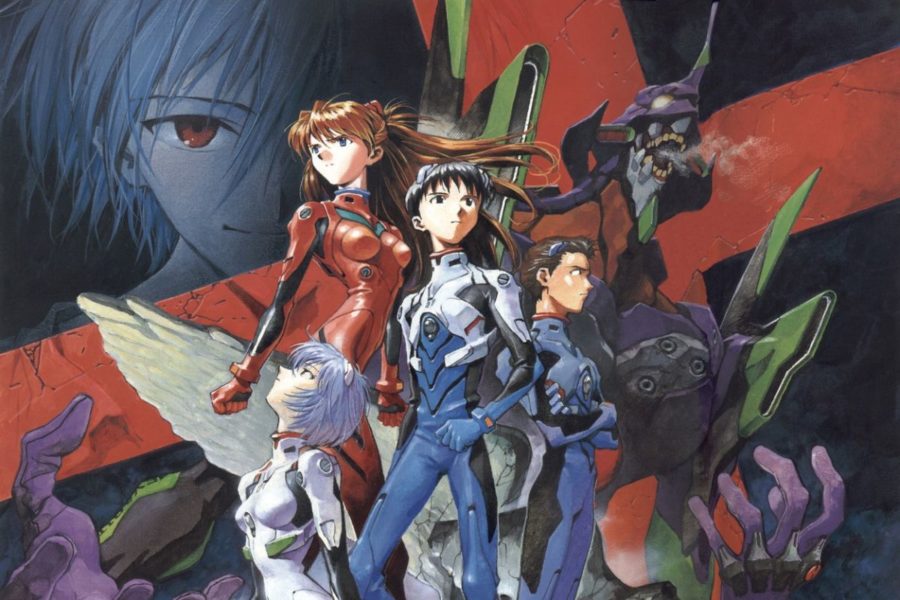 "Neon Genesis Evangelion," while not for the faint of heart, is certainly worth a watch through.

Over winter break, I took the time to watch my first anime: “Neon Genesis Evangelion.” Perhaps this wasn’t the best choice for a beginner, since it left me feeling as if nothing else could ever top it. I would still like to know if any other series could surpass the traumatic psychological potency delivered by this one, but I also know I should be careful what I wish for. After finishing the 26-episode series, I watched the film that goes along with the last two episodes of the series, “The End of Evangelion.” Although I didn’t quite understand what I was watching through a majority of the series and for most of the movie, I do know that I enjoyed every minute of both. The film centers around something called The Human Instrumentality Project—which is touched on towards the end of the series—but that’s not essential to know about if you are a newcomer to the show. If you are new to anime or are someone who is looking for something different to watch, look no further.

​The series centers around Shinji Ikari, who is recruited by his estranged father, Gendo Ikari, at NERV headquarters. Ikari pilots a robot called an Evangelion (Eva) with the goal of defeating evil attackers known as Angels. The series takes place fifteen years after an event known as the Second Impact, where the first angel—Adam—was awakened during an experiment, which resulted in the Antarctic ice caps melting and a shift of the Earth’s axis. In order to prevent a third impact from occurring, Gendo places the future of humanity on the shoulders of his son, whom he has not talked to since he was a child. Once arriving at NERV headquarters, Shinji is assigned to pilot Eva Unit-01, and meets with fellow pilot Rei Ayanami (Eva Unit-00), future roommate Misato Katsuragi and Ritsuko Akagi. Rei is very close to Gendo, and it is revealed later in the series that Rei was designed as a clone of Shinji’s mother with the hopes of being a great pilot for Eva Unit-00. Later in the series we are introduced to another pilot, Asuka Langley Sohryu (Eva Unit-02), who often argues with Shinji, indicating their potential romantic spark. Also introduced is Kaworu Nagisa, who substitutes for Asuka in Eva Unit-02 and is responsible for stirring up deep feelings in Shinji.

​I am not even sure that a graduate student studying psychology could properly explain this show, so I will go light on the analysis and just urge you to experience it for yourself. The show displays all of the characters being tortured by each other, most of which stems from Gendo—although even he has a brief moment of catharsis toward the end of the movie. The series starts off very slowly, and it isn’t until around the 16th episode that we dive deep into what drives each characters’ behaviors. The first few episodes feel quite repetitive, as each episode features Shinji defeating a different angel. These different angels symbolize different stages of Shinji’s life, and also represent not only his battles in the quest to save mankind, but his own quest to discover why his life is valuable. He lets two of his classmates, Kensuke Aida and Toji Suzuhara, get close to him only to eventually pull away from them getting to know him.

​After Asuka shows up in the eighth episode, the focus shifts from the unspoken relationship between Shinji and Rei to the tumultuous melodramatic relationship between Shinji and Asuka, both of whom live with Misato. This heated relationship is observed in the following episode, when Shinji and Asuka must dance with one another to increase their synchronization rate, enabling them to successfully take down the angel when piloting their respective Eva. Initially, I couldn’t stand Asuka as she seems like a loud, obnoxious brat. But, like so many other things in this show, her personality and upbringing were brutally explained in depth later in the series, making me look at her with a kinder eye. While growing up, she was tormented with the necessity to be perfect to please her mother, with their relationship stunting her emotional growth. To make matters more complicated, Asuka clearly has feelings for Shinji. Rei’s cool and cryptic personality, which is amplified around Shinji and Asuka, leads Asuka to believe Shinji finds Rei attractive, or at least more than tolerable. This conflict between Asuka and Rei creates even more division among the three pilots, with everything having to be resolved before the attack of the next angel. Despite running away from NERV and vowing to never come back, Shinji returns when the alarm signals in Tokyo-3—the remains of Tokyo from after the second impact—for the emergence of another angel.

​I think I will leave the back-half of this series for you to appreciate on your own. It is not an easy watch, and certainly not one you can watch half-heartedly. I would recommend experiencing it with a friend or at least during a time where you feel mentally strong. I saw a meme that compared this show to “The Sopranos,” calling the hit HBO series “Evangelion for Americans.” While I am not entirely sure it is a 1-1 ratio, I definitely think some parallels exist between the worlds of post apocalyptic Japan and New Jersey. The last ten episodes depict psychoanalysis in a fashion that Freud could only dream of. The introspection found within is extremely effective at not only prompting the viewer to analyze the characters, but also themselves. I was often left pondering the meaning of my own life while watching it, and this feeling was only heightened while watching “The End of Evangelion.” For those who will watch the corresponding movie, you may find it hard to believe that the first scene is one of the more tame parts of the film. If you feel emotionally overwhelmed after watching the series or the movie, just know that within an hour after I finished the movie, reports came out that Betty White died. I was truly a broken man; it had all come tumbling down. So if you’re in for an emotional yet awe-inspiring time, grab a blanket and a box of tissues, gather some friends, get a copy of the DSM-5 and get ready to deconstruct the human condition.