“Cherry,” the film that shut down CWRU, is ultimately a disappointment 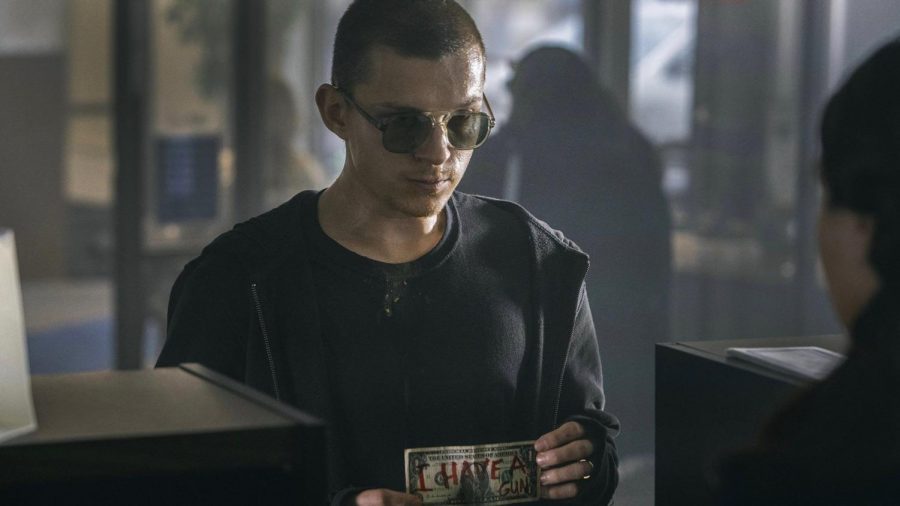 Tom Holland stars as a bank-robbing veteran suffering from PTSD in this disappointing Russos Brothers film.

After filming in Cleveland and shutting down the Case Quad of Case Western Reserve University for half a week, Joe and Anthony Russo’s film “Cherry” finally came out in theaters Friday, Feb. 26. But after seeing an advanced screening of the film, I have to say, don’t bother watching it, even though it was directed by two CWRU alumni, but especially considering the global pandemic. “Cherry” is over two hours long, but feels far longer, filled with inconsequential moments and scenes that add up to absolutely nothing. The only value this film presents is for Clevelanders and CWRU students to watch and say “Haha, I’ve been there!”

The movie opens with the titular “Cherry,” played by Tom Holland, walking out of his house and getting into a car. An aerial shot shows another car following him as the screen turns red and a chapter title shows up. I have no qualms with films being divided up into segments or chapters—it makes sense for this film to do so, since it’s based on a book—but the effect quickly gets old. The red screen is also the only thing that connects the film with its poster. I’m sure there was a good reason to make the screen red whenever a new chapter starts, but it was lost on me.

So Cherry narrates as he robs a bank, in a weird “Ferris Bueller” style, where he’s making quips about his situation, giving the film a strange tone overall. The subject and imagery of the film is dark and disturbing, from depictions of characters going through withdrawal, to horrific images of war, but it’s all juxtaposed with a weird sense of humor throughout the whole experience that ultimately doesn’t work. For example, there’s a scene where Cherry, now unsure what to do with his life, joins the army after his girlfriend breaks up with him. The aspect ratio shrinks into a square as he goes through basic training and a medical exam. It all seems like basic war movie tropes, until there’s a shot from within Holland’s rectum. If you can’t visualize that, imagine looking through a peephole, and on the other side is a doctor looking back at you. It was that, but instead of a peephole, it was Holland’s intestines. Then he goes to war and sees his one and only friend there get horribly burned in an explosion. The movie goes for an explicit dark tone, and the attempts to balance it with comedy just didn’t land.

Additionally, during the war-training sequence, characters will say commands or insults and their words appear on screen like in a music video or a 1960’s “Batman” episode. On top of the jarring aspect ratio, this cartoonish effect took me even further out of the film because it doesn’t happen anywhere else in the movie. Seeing soldiers being insulted is whatever, but having the insult in giant text that appears on and covers the screen as they say it was just really odd. This is all meant to put the audience into Cherry’s shoes, but again, it just doesn’t land.

The pacing was also strange throughout. When Holland goes to war, the third chapter begins, titled “Cherry.” My roommates and I thought that we must’ve been near the end of the film, since the film had dragged on for so long, but no, we were only 45 minutes into a two-and-a-half-hour-long movie. Every once in a while, I checked how far I was into the movie, and every time, it felt like I had watched an hour of content when in reality it was only 15 minutes. This movie just drags and drags through scenes of Holland and Ciara Bravo doing drugs in the most uninteresting and cliche ways possible.

Moving to Bravo’s character, Emily, Cherry meets her at a school that very much looks like CWRU after spotting her from across class. He catches up to her outside and everything except for the two of them is out of focus. To me, this seemed to be the film portraying a case of tunnel vision, where neither of them can see past being with each other. My friend played an extra during this scene and told me that the Russos had indicated that the effect was actually supposed to show that Cherry couldn’t keep up with college life and that the characters were on the same wavelength. Alright, I suppose that makes sense, but it’s just another case of visual effects being used in a clumsy and forced way.

It certainly helps that Emily doesn’t think it’s weird when Cherry shows up high on ecstasy to a party, or when he gets addicted to oxycontin and heroin—and after the war, she starts doing it too. From the beginning of the movie, Emily wears a ribbon around her neck, never taking it off until after she and Holland start using heroin and her childish ribbon is used for wrapping around her arm to make using the drug easier. This movie thinks it’s deeper than it actually is and continuously hits you over the head with heavy-handed themes about the loss of innocence.

Overall, “Cherry” is a long-winded story about war and addiction that you can find in many other works of fiction. It doesn’t really say anything new about either of these topics, instead just showing them and expecting you to react with horror. The use of visual effects seemed to be its way of differentiating itself from the likes of “Full Metal Jacket” or “Requiem for a Dream,” but ultimately came off as stilted and hokey. In the end, this film wasn’t worth shutting down campus for, nor is it worth watching. Maybe catch it on Apple TV+ if you already have a subscription when it releases there on March 12, just to see what came out of the whole experience.