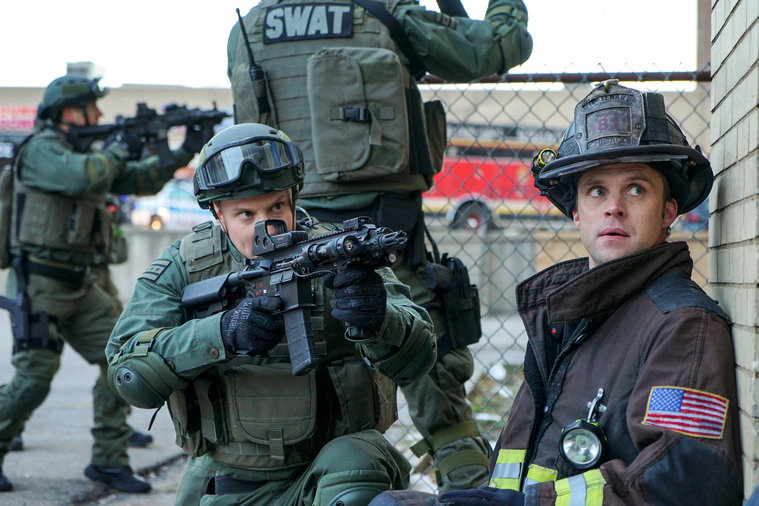 Last night’s episode of “Chicago Fire” started off just like every other episode, with a fire, however, it developed into something more with a great message to take away.

After battling the first (but not the most important) fire of the episode, the show brings us back to the Chilli (Dora Madison) drama the last few episodes have been circling around. At this point, the entire situation is just annoying and I’m not sure why Chilli hasn’t been fired. I understand that Boden (Eamonn Walker) believes everyone in the firehouse is family, but Chilli clearly has issues and needs help. She goes out of her way to try to get Brett (Kara Killmer) removed despite Brett clearly being the better paramedic. In the end Chilli realizes just how messed up she is, and I hope from this point on she will be more likable, because as of now, every time I see her on screen I want her to leave immediately.

Aside from the Chilli drama, this episode’s main focus is a string of terrorist threats that end up being hoaxes until the very last one. Gunmen take a building full of African Americans hostage and begin killing them without remorse. The firehouse is stuck among those hostages and helps them escape. There were so many moments when the suspense made me hold my breath. The pacing and filming were perfect for a gripping event such as this and emotions were very high. There were scenes I thought for sure someone would get shot, but then a curveball would be thrown.

This episode did a great job tackling gun violence and hate crimes. It showed that terrorism just isn’t a large scale event acted out by foreigners. Racial prejudice within the United States is a hate crime that needs to be taken seriously. It’s not just the message on terrorism that I appreciated, but that of hope. After all the events, Boden tells everyone that just because there are bad people in the world, it doesn’t mean that they should give up hope or forget about the good people. That’s a message everyone should remember now and then.

Now it wouldn’t be a “Chicago Fire” episode if there weren’t more side stories playing out on the side as well. Jimmy (Steven R. McQueen) is training for a charity boxing match that never gets shown, Casey (Jesse Spencer) is going after a corrupt politician, and Severide (Taylor Kinney) is smitten with the DHS agent because he can never stick with just one woman. As entertaining as these side stories are, I sometimes feel as if they are just tacked on to fill up the hour timeslot. Despite this, the show keeps me drawn in the entire time.