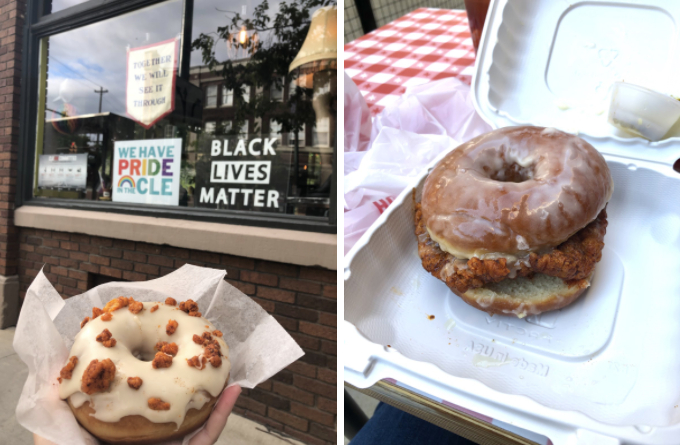 They said it couldn't be done. Brewnuts and Hot Chicken Takeover proved otherwise.

Food can be an emotional experience for many, but trepidation and gross intrigue aren’t the usual emotions associated with dining experiences. However, when two Cleveland restaurants––Brewnuts and Hot Chicken Takeover (HCT)––decided to team up, the results produced tangible fear for this hot chicken and donut enthusiast. But to my surprise, the products of this collaboration, Brewnuts’ HCT donut and HCT’s donut chicken sandwich, were beyond delicious.

HCT is based out of Columbus but has a location on the west side of Cleveland at Crocker Park. They previously collaborated with Brewnuts in 2019, and had revived the “Hot Chicken Donut Sammie” from Sept. 15 through 20. While chicken and waffles make a perfectly acceptable combo, there’s something jarring about a hot chicken sandwich on a donut. Specifically, a glazed, super light and not-too-sweet Brewnuts’ donut. The massive donut was sliced in half and a piece of HCT’s super spicy chicken was placed in-between, served with pickles, of course.

HCT was packed on Saturday, Sept. 19. It’s long, communal-style tables with red and white checkered cloth were empty, though, which was sad to see for a restaurant that is so based in community building, with part of their mission invested in supportive employment. Supportive employment means that HCT offers jobs regardless of factors like homelessness or previous incarceration. For a place with chicken in the name, they are focused on people.

Red stickers with chicken feet are spaced six feet apart in HCT, and it was a short wait for the food. The meals are always served in plastic to-go boxes with plastic silverware, cinching the “home-cooked” experience. Upon opening the box, though, I truly did not know what emotion to feel. Never being one to indulge in crazy fair food, I had no idea what to expect when I took the first, nervous bite.

Somehow, though, the donut and the chicken balanced each other completely. The donut was light enough that it didn’t compete with the breading on the chicken while still counteracting some of the heat. The chicken tasted sweeter than usual, thanks to the sticky glaze, and the donut was HOT from soaking up the spice—it just worked. I could barely finish it, but I also had a side of Ma’s Mac (which is a must if you go). It’s also worth noting that you can pick the heat of your chicken. I went with “warm,” which is “hotter than most mediums,” but those with high tolerance for spice would probably benefit from going up a heat level.

The other half of this collaboration could be found at Brewnuts in Gordon Square Arts District, and was, perhaps, even more unexpected. Unlike the previous partnership between the pair, Brewnuts had crafted a hot chicken donut this time around—a “honey butter frosted, vegetarian donut topped with spicy HCT faux fried chicken crumble.”

Before you even enter Brewnuts, you’re greeted by the “We have pride in the CLE,” “Black Lives Matter” and “Together we will see it through” signs in their window. The door handle is a bubblegum-colored rolling pin––a hint of the funky interior to come. Inside, the back wallpaper is pink with tropical green leaves to match the forest green tile of the counter. There’s pink flamingos above the donut display and the donut boxes are, of course, Barbie pink. It’s all pulled together with a watermelon colored neon sign that reads “Donut Mess With Cleveland.”

Brewnuts seemed a little sad on the morning of Friday, Sept. 18, with its indoor seating closed. That vibe was contrasted, however, with the crazy flavors of donuts available: peanut butter Reese’s Pieces with cookie dough, birthday cake bullseye, green apple caramel peanut and more. It’s the HCT donut, though, that’s the craziest flavor.

The massive, vegetarian chicken donut threatens to be heavy and cakey, but is the exact opposite. I truly went into shock over how delicious it was––again, it just worked. The donut was airy and light and the generous amount of honey butter frosting was the most heavenly thing I’d ever eaten. The sweetness contrasted well with the crunchy crumbs coated in HCT spice, which added a kick of heat and texture without lingering or being overwhelming. While the donut was a whole meal in itself, I seriously considered going back for another.

Both of these over-the-top entrees threatened to be too sweet or simply too much, but they ended up being the perfect combo. While both were delicious and struck the perfect balance of sweet and spicy, it’s Brewnuts’ faux chicken donut that I can’t stop thinking about. If these two businesses ever partner up again, you “donut” want to miss it.