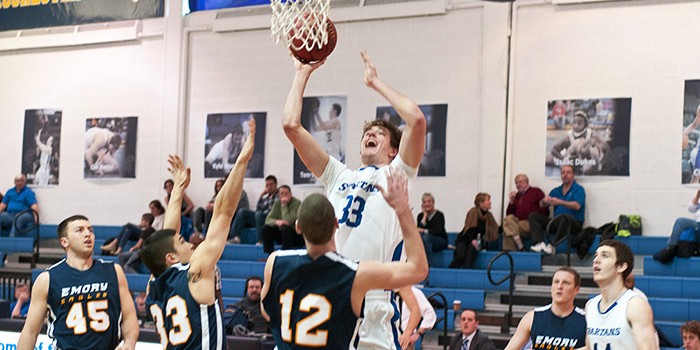 Junior guard Tim Chung scored a career high 22 points as the Case Western Reserve University men’s basketball team hung on for a 58-53 victory at Oberlin College on Saturday afternoon at Philips Gymnasium. Chung’s 22 points off the bench propelled the Spartan reserves, who provided the majority of the team’s offense and outscored the Yeoman bench 39-0.

With the victory, the Spartans improve to 4-2 overall, including a perfect 3-0 on the road. With the loss, the Yeomen fall to 1-5.

In 28 minutes of action off the bench, Chung knocked down 7 of 10 field goal attempts and was 4 of 5 from three-point range. Sophomore forward Brian Klements led a balanced Case attack behind Chung with seven points, while senior forward and captain Austin Fowler, junior center David Thompson and freshman guard Jimmy Holman each tallied six markers, respectively.

Early on in the contest, the teams traded baskets before Case moved ahead for the duration of the half at 6-5 with a layup by freshman point guard Jordan Dean at 14:24. Over the next 7:06 of play, the Spartans utilized a 14-4 run capped off by a jumper from Holman to build a 20-9 lead. The visitor lead grew to as many as a dozen (24-12) on a jumper by Thompson with 4:27 left, but the Yeomen chipped away and eventually cut the deficit to two, 26-24, on a three-point field goal by Andrew Fox with 17 seconds left.

However, Spartan sophomore Dane McLoughlin responded during the final possession of the opening half with a three via an assist by Dean.

In the second half, Oberlin scored the first five points and tied the contest at 29-29. However, a pair of free throws and a jumper by Chung then a layup following a steal by sophomore guard Ken Gibbons pushed the Spartan advantage back to six, at 35-29, with 15:13 left. Over the next five minutes, Case reeled off an 11-3 run finished off by a three-pointer from Chung with exactly 10 minutes remaining in the contest.

Not done yet, Oberlin whittled the Spartan advantage down to just two on a pair of occasions with the final time coming with 29 ticks left (55-53), but Case knocked down 3 of 4 charity tosses in the waning seconds for the five-point victory.

The Spartans hit the road once again when they travel to Kalamazoo College on Sunday, Dec. 9 at 2 p.m.