Church of the Covenant a cross denomination sanctuary for all students 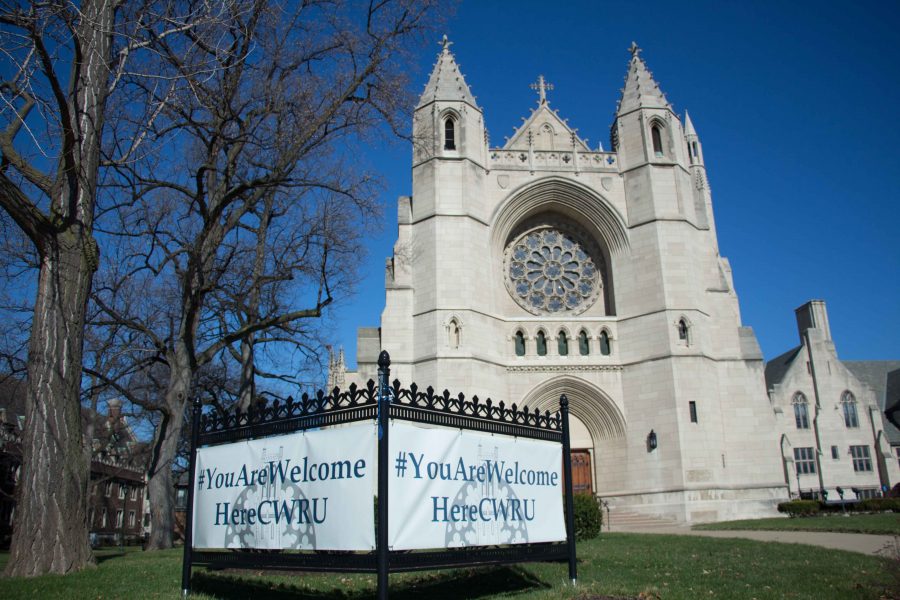 The Church of Convenant provides the University Circle community a sanctuary where they can discuss their concerns and opinions freely. The church also has an emergency food pantry, a resale store and events like Thursday night dinner to engage CWRU students and community members.

The Church of the Covenant’s yard showcases a sign often stating a message of hope inspired by national events. Sometimes that message is meant for Case Western Reserve University students—for the past weeks, it has read, “YouAreWelcomeHereCWRU.”

A major landmark in the Uptown and University Circle area, the church prides itself on being an open and inclusive place for all members of the Cleveland community of all denominations.

“YouAreWelcomeHereCWRU” is a campaign launched by the Center of International Affairs to emphasize that everyone is welcome on the CWRU campus as a part of a nation-wide response to President Donald Trump’s executive orders banning immigration into the United States from seven muslim-majority nations. The Church of the Covenant participated in the campaign as a way to provide a safe space for community members, along with its many other efforts to engage with CWRU and the greater Cleveland community.

The Rev. Amy Starr Redwine, pastor and head of staff, and Kevin J. Lowry, chaplain to the students, explained the work the church does, its mission and their relationship with Case Western Reserve University and the greater Cleveland community.

One of the highlights of the church, and something that both Redwine and Lowry emphasized was the Sanctuary, a place for people to “step out of the craziness.” The Sanctuary is a peaceful and quiet environment that is open to everyone everyday from 9 a.m.-5 p.m. The Sanctuary also has something called the “Carpenter’s Box”, where people can put in anonymous prayer requests, which are prayed for during Sunday worship.

Lowry also emphasized the availability of an all-gender restroom in the sanctuary, saying “it is on the CWRU all-gender [bathroom] map.”

One of the church’s more popular programs is their Saturday tutoring program, which is in its 26th year, and hosts a lot of student volunteers from CWRU. The program serves students from the grades of one through 12 from throughout the Cleveland metropolitan area, rather than just a single school.

“Sometimes there are as many as 200 students in the church on Saturday morning, between the students who are there and the tutors,” Redwine explained.

According to Redwine, the church also has an emergency food pantry that is opened up twice a month to those who “are in a place where they need emergency food to get them through a few days.”

The emergency pantry is operated using funding through the church and food donations from the community.

The church also runs the Cache resale shop that is open twice a week. People from all over donate things such as clothing, household items, bedding and dishes, all sold for very low prices. It is a viable option for students who are looking to purchase something.

“It’s a place where people can buy low-price but high-quality stuff,” Redwine said.

There is also a weekly bible study on Tuesdays at 11 a.m., which is led by Redwine. It is very casual and requires no prior preparation.

“She throws out big questions and it’s kind of a philosophical, theological conversation over food and drinks.”

There is also Sunday morning worship, at 10 a.m., which sees a huge student attendance.

This shed some light on the positive and impactful relationship that the church has with CWRU. As Lowry explained, “the church hosts 15 to 20 students weekly at worship, and that spans a broad range of denominations…even international students who are curious about Christianity.”

“I think what the Church of the Covenant in our area, and the church at large, can do is create safe spaces where people can venture [courageously] into conversations with people they don’t agree with,” said Redwine.

Redwine believes that one of the reasons that such a political climate exists today is because “we’ve become increasingly isolated by our views. We surround ourselves with people who think like we do.” She said the goal of the church is to help people put their differences aside and engage in healthy discussion about today’s situation.

Redwine reflected on the history of the church and its relation to today’s political climate. In the 50s and 60s, it was at the forefront of the civil rights movement, and was the first presbyterian church to integrate memberships.

“I think because of this, it has helped the church become more curious about what’s going on today. Especially for a presbyterian church, which is a largely white denomination,” said Redwine.

Lowry also believes that students are wrestling with “where they stand in the world” and the church is determined to help students through that.

“It’s kind of like ‘Theology on Tap’ where we discuss issues in the world and how they relate to us as students, as well as how do we connect that to our faiths and our beliefs,” said Lowry.

The church has three tracks: faith, fellowship and service. The faith track is to do with “what we believe in.” The fellowship track deals with “who we are together as a community.” The service track employs student volunteers to do various service activities, what Lowry refers to as ‘Faith in Action’.

The church recently launched the Connection Center, which is at the bottom of the education wing and will be open to students throughout the week.

“It is a safe space for students to come and hang out,” explained Lowry. “It also has Wi-Fi connectivity and an all-gender restroom. It is basically an all-inclusive student center.”

The church also hosts the Interfaith Center above the Connection Center where students of other faiths can worship, and there is no Christian symbolism of any kind.
“It is the only urban church I’ve worked in that is so open, as imposing as it may look,” Redwine said.