Classical music for all 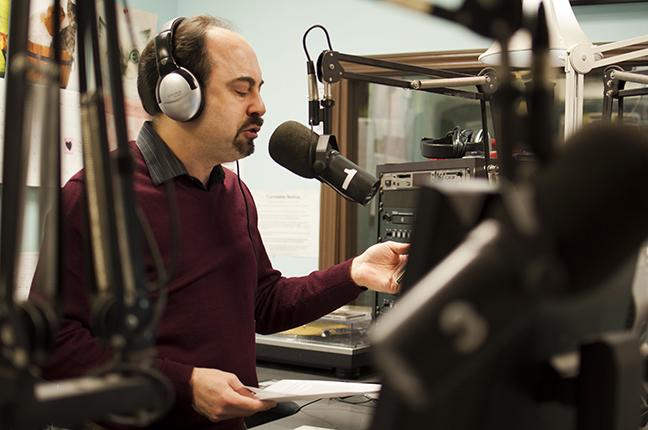 Are you one of the many individuals on campus who feel that the shadow of Severance Hall and the riches of the Cleveland Orchestra are intimidating—but wish to reconcile your curiosity for classical music? The community has found the perfect answer in “Not Your Grandmother’s Classical Music” with host Eric Charnofsky, on Case Western Reserve University’s own radio station 91.1 WRUW-FM. Just past its first anniversary on air, the show surprises, delights and informs every Monday at 1:30 p.m., as the perfect bridge for seasoned listeners and hesitant newcomers alike. Complete with lively and well-researched features, surprising content, back-stories on the works and guidance by a distinctive and compelling host, this dynamic program is indeed a growing hit.

Host Eric Charnofsky, himself a distinguished pianist, has been a resident of Cleveland since 1996 and is also currently on faculty as an instructor in the music department at CWRU. “The show is not just for the student community, and is an ideal pathway of interest to classical music with its endless discoveries,” says Charnofsky.

His aspirations for the program include making people on campus more aware of WRUW and making the community more aware of performing arts events on CWRU’s campus. He even hopes to expand the show to include interviews with faculty colleagues, guest performing artists and ensemble and stage directors. As for the music itself, he adds with a smile: “As with most programs on WRUW, you will not find the standard top-40 hits here. These are the most unexpected and surprising numbers you will find on air. Some of these pieces you will not imagine hearing on a classical music station, and their stories, which we always share, are even more unexpected.”

Featured works have included George Crumb’s “Voice of the Whale,” which uses amplified ensemble instruments; the Heinrich Biber “Battalia,” hundreds of years ahead of its time with polytonal use of instruments; works by Charles Ives for two pianos tuned a quarter-tone apart; and the early 18th century composer Marin Marais’ early programmatic piece “The Bladder-Stone Operation,” whose score includes such colorful indications to the musician, such as “The patient is bound with silken chords” and “He screameth.”

The weekly program first aired Jan. 21, 2013 as a 1.5-hour show and has increased to a full two-hour format as a mid-day accompaniment for study hour and students with headphones, and has built a loyal following within the campus theater, dance and music departments. For those unable to listen live because of a class or another commitment, the show is archived and available to listen to on-demand for one week after the original airdate on the WRUW website. Information about it can be found on the Facebook page for “Not Your Grandmother’s Classical Music.” The show has a changing and lively format, but typically features a mid-day orchestral work, a CWRU performing arts calendar, themed subjects and occasionally student-read features.

Charnofsky, a radio host and programmer since his student days in California, explains that the name for the show “came to me randomly at the airport, and it seemed a perfect way to address the powdered-wig stereotype of classical music and its listeners.”

The program does run some more standard repertoire at times, though often with the zany twist of an unusual arrangement—for example J.S. Bach on synthesizer—that can surprise listeners in their appeal and similarity in sonics to more familiar music. Students looking to hear particular types of repertoire or genres are able to make requests on the Facebook page as well. This show comes highly recommended for all, and is a perfect addition to a Monday afternoon routine.