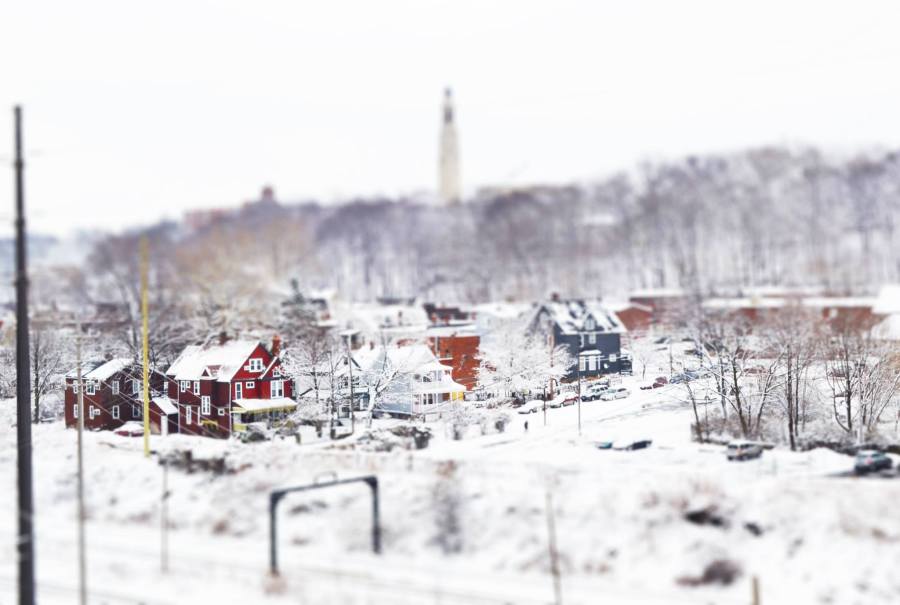 Snow hit Cleveland (pictured above) suddenly this past week. CWRU’s “weather guy,” Dr. Peter Whiting, says it might be a snow-heavy winter this year.

Clevelanders like to think they’re tough enough for any weather pattern. But November’s 24-hour transition from warm and sunny to winter wonderland seems to be a cruel reminder of the season to come. So how do students lug around our textbooks with the weather changing? They prepare.

“Anticipation is that it’ll be 50/50 if this winter will be colder or warmer than average,” said Whiting, who is also an associate dean of the College of Arts and Sciences. “But not nearly as cold as last year.”

Whiting makes his predictions using research from the federal government’s National Oceanic and Atmospheric Administration, which includes a Climate Prediction Center with weekly, monthly and seasonal predictions for temperature and precipitation.

Although this winter should likely bring warmer temperatures than last, according to Whiting, this may mean more snowfall. Due to Cleveland’s proximity to Lake Erie, the city is often subjected to unusual weather patterns known as the lake effect. When the lake is not frozen over, water vapor evaporates and collects in the air, coming back down as snow. A warmer winter means more evaporation, which means more flurries.

The entire country is feeling the pressure of the extreme weather changes, with temperatures in all 50 states falling to freezing or below on Nov. 15.

Whiting considers the amount that scientists know about weather, such as recognizing storm formations before they even start to form, to be amazing, but there is still more to learn. Through collecting data over more years, researchers are starting to get better at recognizing weather patterns.

Whiting suggests that, in order to prepare for the harsh winter ahead, students dress properly for the weather; be sure to wear a hat and sufficient layers.

“I saw a kid on campus wearing shorts,” Whiting says. “I couldn’t believe it.”

Out-of-state freshmen are learning to adjust to the Cleveland weather.

“I like playing in the snow, so I’m buying things I can layer,” said freshman Mandy Wong. “In New York, the temperature isn’t as temperamental.”