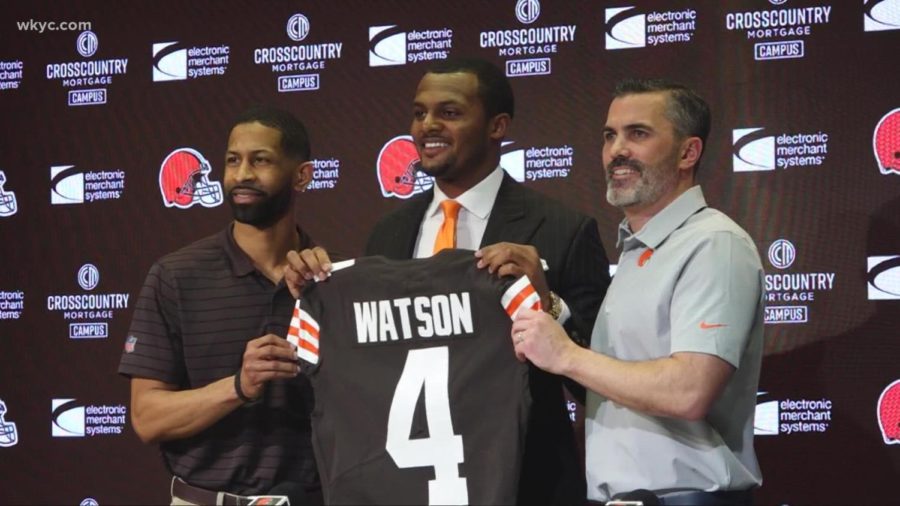 The Cleveland Browns failed to meet their high expectations for the 2021 season following their successful 11-5 record in 2020. With a former No. 1 overall pick quarterback Baker Mayfield seeming to deteriorate in both his form and leadership—and the Browns still recovering from a plethora of injuries in their 2021 campaign—head coach Kevin Stefanksi and the front office blitzed during free agency at the onset of the 2022 NFL offseason.

The Browns’ first major move was franchise tagging a former first-round pick, tight end David Njoku. The dynamic 25-year-old has notched respectable numbers since the 2017 draft: 148 receptions for 1,754 yards and 15 touchdowns. Not only does he provide an additional vertical threat in the passing game, he also uses his massive 6-foot-4-inch, 246-pound frame to pave the way and run block for perhaps the most important component of the Browns offense: their one-two punch of running backs in Nick Chubb and Kareem Hunt. In general, each team is able to tender one franchise tag each year, which is a one-year contract in which the recipient must either sign the tender or negotiate a long-term deal with the franchise by a predetermined deadline in July. The unique aspect of a franchise tag is that it offers a predetermined salary, which is set by averaging the salaries of the top five players of a given position.

Perhaps one of the more surprising trades of the NFL offseason thus far has been the transaction between the Dallas Cowboys and the Browns which saw the arrival of four-time Pro Bowler Amari Cooper on March 11. The Browns traded a 2022 fifth-round pick (155th overall) and a 2022 sixth-round pick (193th overall) for Cooper and a 2022 sixth-round pick (202nd overall). The Browns have lacked a true No. 1 wide receiver for some time. They tried their luck on both Odell Beckham Jr. and Jarvis Landry, a solid pass-catcher that the team recently released. In his time in Dallas, Cooper has been in the top ten of all receivers in major categories such as targets (428), receptions (292), receiving yards (3,893) and receiving touchdowns (27). Now, Cooper joins wide receivers Donovan Peoples-Jones and Jakeem Grant Sr. Though Amari Cooper boosts the Browns’ stock in the American Football Conference (AFC) North, which is already teeming with talent, his arrival alone does not make the Browns an elite AFC team.

Perhaps the greatest, and most expensive, addition to the Browns is quarterback Deshaun Watson. On March 15, a disgruntled Watson was acquired from the Houston Texans for a plethora of picks: three first-round picks (2022, 2023 and 2024), a 2023 third-round pick and a 2024 fourth-round pick. Not only did the Browns give up highly-valued future draft capital over the next several years, but they are also set to give Watson a five-year, $230 million contract. The full $230 million is guaranteed, making it the highest guarantee given to an NFL player.

Watson did not play a single game last season due to 22 lawsuits against him alleging sexual assault and inappropriate conduct during massage sessions. Just before he was traded, a Texas grand jury decided not to indict Watson on criminal charges, paving the way for his NFL reentrance. However, Watson could still face punishment from the NFL while the 22 lawsuits, now civil cases, are still active against him.

No matter the case, Watson’s arrival doubled the Browns’ chances of winning the Super Bowl, placing an immense amount of pressure on the franchise yet again.