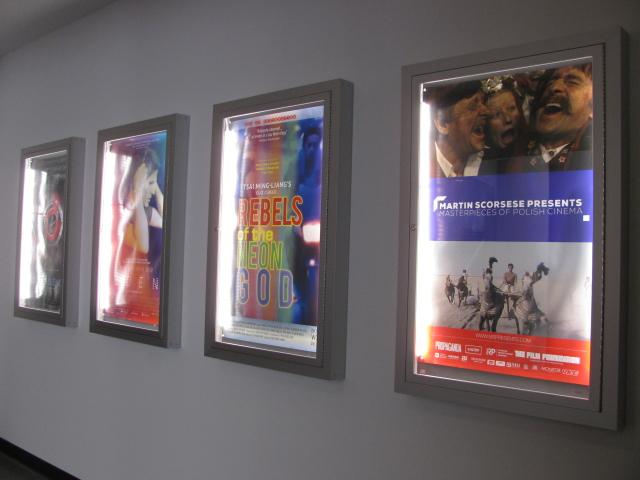 The Cinematheque has moved to a new location inside the CIA George Gund building.

The Cleveland Institute of Art Cinematheque, founded in 1986 to present alternative independent films has recently found a new home at the Peter B. Lewis Theater, which is located in the Uptown district of University Circle. The theater itself is located in the CIA George Gund building. The Cinematheque completed its move on Aug. 1.

The theater shows most films in 35mm film, but recently acquired a digital projector and is now able to screen films in 4K resolution. “The Cinematheque has been rated as one of the best theaters in the country,” said John Ewing, the director and co-founder of the Cinematheque. “Some films are shown exclusively here in Cleveland and only here in the Cinematheque,” he added.

According to Ewing, when the theater is not being used to screen films it is a classroom for CIA students.

This year, the Cinematheque will celebrate its upcoming 30th anniversary with a wide and extensive film selection ranging from older, classic films to experimental, independent contemporary works. A variety of these films has been segmented into different categories throughout the fall season based on the types of films being showcased.

The first category is the “Premiere Showcase,” which will be the first showing of a variety of major international films. This showcase will go from Sept. 3 to Oct. 20 and will feature 15 different programs. These programs will include “Gueros,” “Kurt Cobain: Montage of Heck,” to “The Connection.”

Another section is “Two Tavianis Times Three,” running from Oct. 10 to Oct. 25, which will honor the works of brother filmmakers Paolo and Vittorio Taviani by presenting their prime works in restored conditions. These films are “The Night of the Shooting Stars,” “Padre Padrone,” and “Kaos.”

Yet another category is “Martin Scorsese Presents: Masterpieces of Polish Cinema,” which will go through Sept. 13 to Oct. 25, which will cover hand-picked Polish opuses by Martin Scorsese throughout the years. This section will include WWII dramas, historical epics, romance films, a fantasy film, social dramas and comedies.  Notable films include “The Wedding,” “Illumination” and “A Short Film About Killing.”

The last set is called “A Second Look,” and will run from Sept. 3 to Oct. 24 and will encompass 14 films. These films are primarily classics and other gems that may have been missed from long ago. Notable films in this category include “The Goonies,” “Lawrence of Arabia” and “Nothing Lasts Forever.”

This extensive film selection, along with the move to a newer building, may prove to be a gateway for aspiring film students or film enthusiasts who enjoy the occasional art film. Luckily for film enthusiasts, the Cinematheque continues to be a part of the University Circle cultural community.