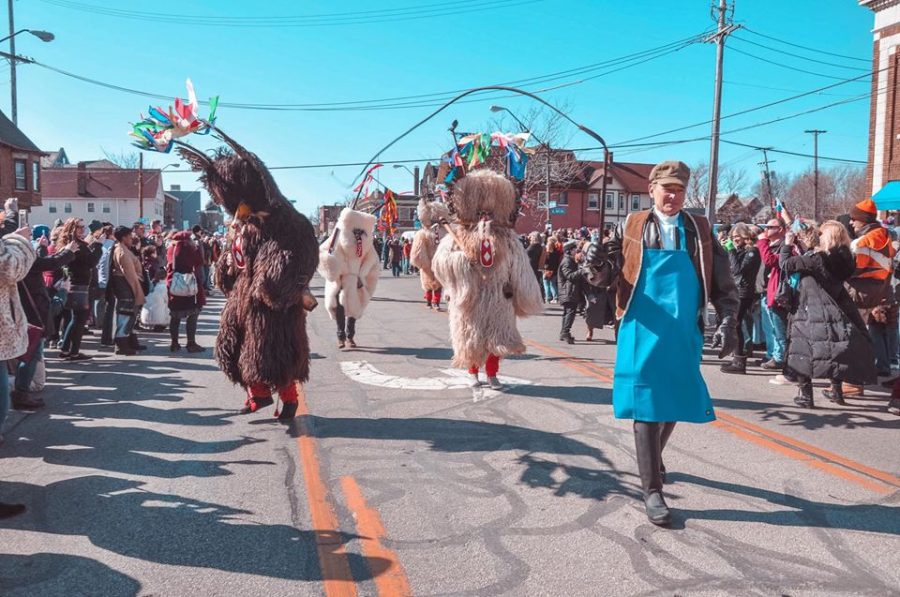 Mardi Gras is often thought of as a tradition exclusive to New Orleans; however, it is one of many carnival celebrations throughout the world. One of them, Kurentovanje, was celebrated in Cleveland from Feb. 16 to 22.

Kurentovanje, described by Cleveland Kurentovanje as “Slovenian Mardi Gras,” has complex origins. It is thought to be linked to older Celtic, Slavic and Ilyrian customs, with similar festivals occurring in Eastern Europe.

It is a celebration of the Lenten season and of the arrival of spring. Named after the Kurent, a mythological figure that was previously thought to end winter and start the spring, Kurentovanje helps preserve Slovenian traditions with a carnival celebration that began in the 1950s, featuring figures unique to the Ptuj region, notably the Kurent, a mythical being with the power to chase away winter and begin the spring.

Cleveland Kurentovanje was created in 2013 by a group of Slovenian Americans living in Cleveland to promote culture, merrymaking and growth. During its first year, the festival had over 2,000 visitors. Since then the festival has continued to grow, with years featuring up to 7,000 visitors. More events have been added in the days leading up to the main celebration on Saturday, Feb 22.

This year’s celebrations began with a parade on Sunday, Feb. 16 and a dinner Monday, Feb. 17 co-sponsored by Dinner in the Dark and CLE Dinner Club. On Tuesday, Feb. 18, the Slovenian National Home hosted the three-part Slovenian Cultural Fair. The fair included a networking event with Cleveland-based Slovenian nonprofits, a Slovenian language course with Dr. Luka Zibelnik, a visiting professor at Cleveland State University from the University Of Ljubljana, Slovenia and the debut of two beers brewed specifically for Kurentovanje from two local brewers, Collision Bend and Noble Beast. Wednesday and Thursday featured strudel making and Slovenian string art events. Cleveland Kurentovanje partnered with the owner of My Mother’s Bakery, Ellie Omahan Rickard, and a representative from CLE String Art, Taylor Miller. The Chardon Polka Band performed at the Kurent Jump, the first event where people dressed as Kurents, wearing sheepskin and a chain adorned with huge bells, appear. Saturday began with a 5K run sponsored by Hasna Brewery and a second parade prior to the start of the main festival.

The main celebration on Saturday was hosted at the Slovenian National Home. Each floor had different activities, including two live bands, Slovenian food and dancing.

“The event was so open to everyone,” Hunter Lantzman, a fourth-year student at Case Western Reserve University. “ … the bands were great, the pierogi and sausages were delightful and if I weren’t graduating, I’d for sure be back next year to see the parade as well.”

Cleveland Kurentovanje has expressed their commitment to keeping the Saturday event free to the public in the future, making it a great way to experience and learn about Slovenian culture. The organization states that the event will happen annually every Saturday before Mardi Gras, “rain/blizzard or shine.”

Kurentovanje is a great opportunity to experience Slovenian culture and learn about the carnival tradition, but it is not alone. Various organizations in Cleveland host events to celebrate cultures from across the world, such as the St. Stanislaus Polish Festival and the Cleveland Cultural Gardens Federation’s One World Day, creating an environment conducive to global understanding and cultural awareness.