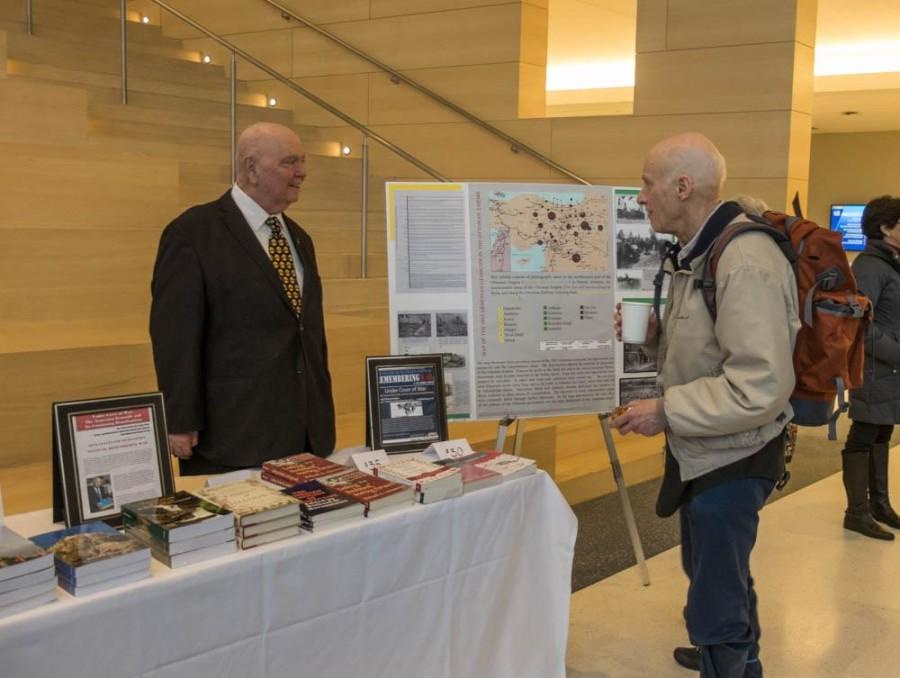 Dr. Richard Hovannisian (left) after his presentation as part of the Cleveland Humanities Festival.

The Cleveland Humanities Festival began April 1 with exhibits and events all based around this year’s theme: Remembering War. Lasting for about a month, this festival is first of its kind to take place in University Circle.

Director of the Baker-Nord Center for the Humanities Peter Knox stated that “Cleveland is a great place for it,” explaining that “many wonderful institutions had a part in making this possible.”

Knox is referring to the results of the Baker-Nord Center in coordinating a cooperative effort between the 21 Cleveland-area museums, educational institutions and art organizations taking part in the festival.

Monday, April 4 in the Tinkham Veale University Center a somber audience waited for the event “Under Cover of War: The Armenian Genocide and its Continuing Ramifications.” After introductions by Knox and the Armenian Genocide Centennial Committee, the distinguished speaker Dr. Richard Hovannisian, was given the stage.

He was referring to the Armenian Genocide.

“They could not understand. What would we do? Why did it happen?”

Hovannisian was born in California to a family of survivors of the Armenian Genocide. The story that he told the audience was one filled with personal sorrow. He started his story of tragedy two generations prior with his grandfather.

He told the audience that before the genocide even started, the population of young and able men was being culled. His grandfather was called into service for the Ottoman Empire. Like many women of Armenian families, his grandmother was devastated.

“Now they are being taken away without knowing what was going to happen to them.”

The men taken away were worked to death in forced labor camps. Those who survived were executed.

Hovannisian explained that these atrocities were allowed to take place under the cover of war. And his grandmother, like many women at the time, was left with no man in the house and forced to relocate.

“The government gave them three days notice, stating that they were being relocated for ‘the security of the nation and for themselves.’”

This deportation was a death march. As women and children traveled all the way to the Syrian desert, “the population of survivors dwindled until it was mainly young girls of 18 to 20 years old.”

Included in those who marched was a young boy named Kaspar, Hovannisian’s father. First sold into slavery, Kaspar traveled from one country to another and by the age of 19, docked at Ellis Island, the entryway to America, in the hope of a better life.

After the lecture, Hovannisian explained that progress is being made, especially with college activism. His lecture resounded with members in the audience.

“We have to learn what are the lessons and what are the warning signs, so that evil does not go unnoticed,” explained Hovannisian

Members of the audience, holding back tears, shared their sympathies and experiences escaping genocide.

“This is the first genocide of the [19th] century. It’s important to understand it and recognize it so we can hopefully prevent something like this from happening in the future.”

The 2016 Cleveland Humanities Festival will continue with a variety of events on the theme of “Remembering War” throughout the month of April. More information is available at chf.case.edu.