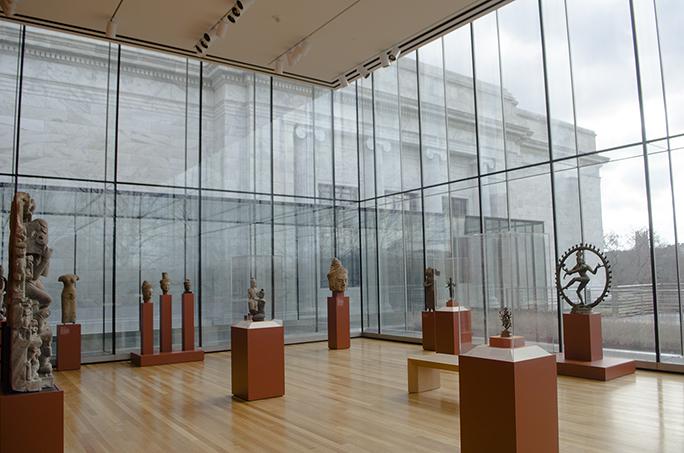 The Cleveland Museum of Art started 2014 by opening a curtain that has kept a large portion of the museum out of view. The museum has also, in the past, revealed 33 percent of gallery space, a 76-seat restaurant and lounge, a 12,000-square-foot interactive learning center and a glass atrium of 39,000-square-feet (also known as Cleveland’s largest free public space).

These massive additions to the museum are the result of an 8-year expansion project that cost $350 million and is the largest cultural project in Ohio’s history. The original 1916 building has also been updated and restored, and the museum reports it will endure the next 100 years.

The mastermind behind the expansion project is acclaimed architect Rafael Viñoly, whose works span six continents and vary extensively in nature, ranging from hospitals to stadiums to hotels. The museum explains that Viñoly was the perfect candidate for this project due to his “elegant and expressive use of structural form and modern materials such as glass and steel…and intuitive understanding of how to respond to a specific site.”

Viñoly’s incomparable contemporary style certainly shows through in his work on the CMA. Despite this, he decided that the original 1916 building should remain the heart of the museum, or as he tastefully described, the “beautiful jewel set within a new ring.”

Perhaps the most astounding feature of the expansion project is the Ames Family Atrium, which creatively unites the classical marble 1916 building with Viñoly’s modish metal, glass and wood building.

The unification takes place in this massive and uplifting room, an artificial nirvana that is strikingly illuminated with an effective combination of artificial and natural light. The atrium has become an immensely popular site for events and provides a serene escape for visitors.

Former museum director David Franklin has even described the area as a place “to take you out of your daily life, surrounded by beautiful works of art, beautiful architecture, and you have a different feeling, almost sublime.”

The atrium was one of the final aspects of the project to be completed, having been opened in late 2012. However, the closing act to the colossal building project was the recent completion of the West Wing.

The West Wing showcases an exotic collection from China, India and Southeast Asia. The wing, which contains six galleries, opened to the general public on Jan. 2, revealing artworks that had been hidden from view for the past 8 years.

While the pieces are flawless, the arrangement and layout of the galleries is also masterful. Each work is highlighted carefully, and shown through the use of artistic lighting. The walls of the museum itself appear to conform and contort to fit the art, the rooms having been built specifically to cater to the pieces rather than the other way around.

One of the new galleries is particularly striking, containing a room that is composed of three glass walls and a glass ceiling. The room has been appropriately dubbed the “glass box” and features gorgeous stone and bronze sculptures.

Curator of Indian and Southeast Asian Art Sonya Quintanilla explains the pieces are showcased in a similar manner to how they would have been displayed on the streets during a special occasion. Additionally, the darker inner galleries provide for an almost religious experience, flanking the viewer on all sides with impressive Buddhist statues.

A highlight of the Indian gallery is “Nataraja, Shiva as the Lord of Dance,” the first piece that captures the eye upon entering the “glass box.” The massive bronze sculpture depicts Shiva, the all powerful creator divinity, with his excessive limbs positioned in a surprisingly graceful arrangement.

He is blatantly omnipotent, surrounded by an imposing ring of fire and crushing an “ignorant figure” with each step. His power is only highlighted by the statue’s placement against a window, which provides a picturesque backdrop and often allows for the sun’s alignment directly behind the creator god.

The Chinese collection is equally impressive. Curator of Chinese Art Anita Chung explains that, while the collection is relatively small, it contains pieces that are the peak of artistic achievement. The pieces not only demonstrate the evolution of Chinese art, but also show the development of Chinese technology over the span of thousands of years.

Some stunning highlights in the collection include ancient bronze vessels covered in fantastic creatures and beautifully intricate designs, an extensive ceramics collections, and an 11-foot, 3-inch long scroll that will be displayed at its full length for the first time in the museum’s history (thanks to the gallery’s 16-foot ceilings).

Interestingly, a 2004 landscape painting by the talented Li Huayi is also displayed amid the ancient art. Chung states this is the first time the museum is displaying a contemporary piece alongside ancient pieces.

This distinctively unifying result is also evident in the overall expansion project. The completion of the expansion project has not only brought a unification of two buildings, but has also helped to more effectively join artistic history from thousands of years and countless locations. But perhaps most importantly, through its many new facilities, the now whole museum will help to better unite our community.