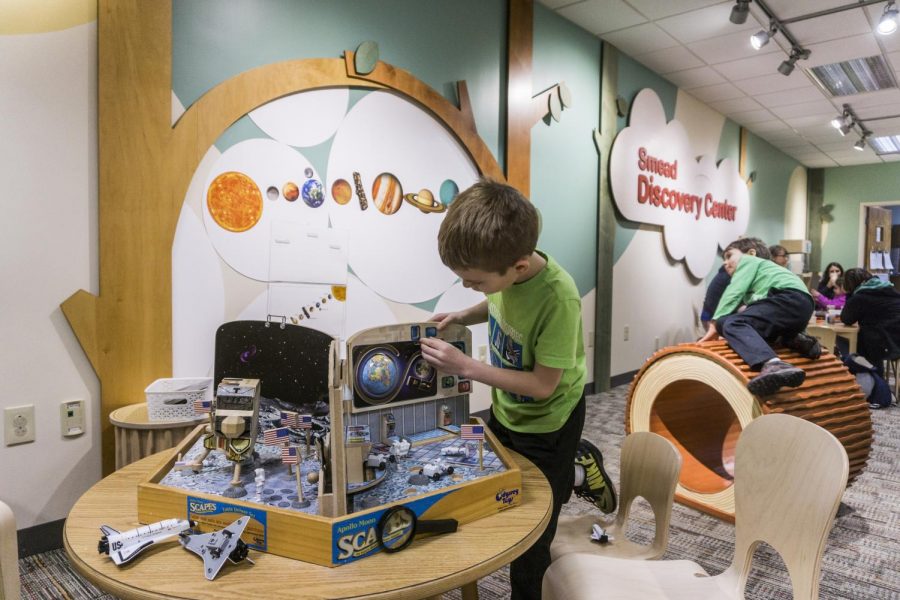 Parents and children engage in creative and educational activities centered around astronomy for the Cleveland Museum of Natural History (CMNH)'s Astronomy Day.

The Cleveland Museum of Natural History (CMNH) hosted its annual Astronomy Day, a public event intended to educate the community on space and related topics. Last Saturday’s festivities included a variety of interactive activities meant to engage visitors of all ages.

Kaelee Parker is a third-year astronomy and physics major at Case Western Reserve University and volunteers with the CMNH Department of Astronomy. According to Parker, the activities hosted by CMNH on Astronomy Day are intended to spark scientific interests in both children and adults.

“Astronomy is a wonderful way to get children and adults interested in science and the natural world,” she said.

Parker participated in Astronomy Day by teaching visitors about the composition of moon rocks, comparing them to similar species found on Earth.

Several kid-friendly activities, including the “Make Your Own Constellation” station, were equipped with markers, stickers and other art supplies which encouraged teamwork and collaboration. At this specific station, children worked together to trace constellations onto a large piece of the “night sky” hanging on one of the museum’s walls.

The “Build Your Own Telescope” station was another activity geared towards kids, and based on visitors’ remarks, the project was well received.

“Building telescopes is actually really fun,” a young participant said to her mother.

Activities intended for older crowds included tours of the Mueller Observatory, educational modules which surveyed the Moon and the opportunity to view astrophotography and other space objects.

Visitors can use the Mueller Observatory’s telescope to view the sky on Wednesday nights from 8:30-10 p.m. between September and May, but Astronomy Day was an exception; CMNH opened the Observatory for tours throughout the morning.

Visitors had the opportunity to view the sun’s reflection from the Observatory’s telescope, but museum staff reported disappointment due to cloudy weather.

Regardless of the weather, Parker said that over 1,700 people gathered to celebrate Astronomy Day.

“There is something wonderful about seeing that kind of community support,” she said, adding, “This event helps the Cleveland community become more invested [in] and informed [about] astronomy.”