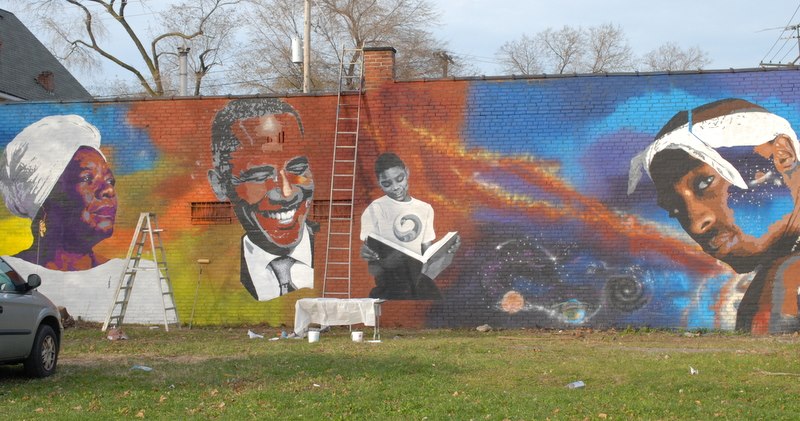 Sankofa Fine Art Plus is a non-profit devoted to educating and advocating for African-American artists through community collaboration. Its Executive Director, artist Gary Williams, creates a mural on East 105th Street in celebration of African-American art and culture.

Every neighborhood has defining features. For University Circle, that includes Severance Hall and the Case Western Reserve University campus; for Coventry, that includes a wide collection of art and music held in different venues, like the Grog Shop. If Sankofa Fine Art Plus (Sankofa) upholds its objectives, the Glenville neighborhood will be known for its extensive collection of murals.

On Tuesday, Feb. 26, artists Gary Williams and Robin Robinson presented a dynamic discussion on the neighborhood’s rich history in their one-and-a-half-hour-long program “Glenville Exchanges: The History of Glenville told through its Murals.”

“We want to take E. 105th Street and turn it into a mile-long art exhibit,” Williams, the executive director of Sankofa, said.

Founded in Glenville in 1999, Sankofa is a nonprofit community organization which celebrates “African-American and ethnic art and artists,” according to its mission. The group uses public community space to honor their passions and heritages through educational art, and also to foster a sense of ownership and pride.

Using murals they have either seen or created themselves, Williams and fellow artist Robinson presented the story of their neighborhood through an art form they have spent the past five years collaborating on. The event had a fitting venue at the PNC Glenville Arts Campus, home to FrontArt, a new art organization which brings artists from across the world to pursue art residencies in Cleveland.

This year’s crop of residents features local Cleveland artists, artists from Mexico, China and other countries. FrontArt Director of Public Programs and Engagement Arlene Watson hopes the diverse group of artists will lead to a two-way cultural exchange.

“The education has to come from both sides,” Watson said. “The local landscape will inform what they are going to do.”

In the Feb. 26 presentation, Williams began by informing the audience of public art’s role in American history. According to Williams, public art first manifested itself as free museums and public works. These installations, however, were limited in reach, excluding those who did not have the time or means to experience an art museum visit. It was only in the 1960s when the prevalence and popularity of street murals made public art a true everyday part of American life.

To illustrate his point, Williams displayed the first mural he ever saw, “Faces,” a piece consisting of multi-colored faces over a black background. The artist is Front Artist and Cleveland native Dale Goode, who was in the audience and answered a few questions from Williams.

Goode completed “Faces” in 1978 on E. 105th and Superior in response to the government’s discrimination in arts funding.

“They were doing murals all over downtown but nothing out in the interior, Glenville, Hough,” Goode said.

Goode added that the NAACP sponsored the mural, while Sherwin-Williams donated the paint. He said he wanted to use the 250-foot-long, 60-foot-high wall as his canvas, and painted the mural by himself, brush stroke by brush stroke.

“A lot of people in the community encouraged me every day; people brought me food, brought me water, refreshments to drink,” Goode said. “The amazing thing is that the mural stayed up for 25 years with no graffiti on it. They really respected it.”

Meanwhile, Robinson discussed Sankofa’s outreach programs, highlighting the importance of public art that pays homage to the community it serves. The most striking example of Sankofa’s relevance is the daring “Our Lives Matter Mural” on 888 E. 105th Street, installed in 2015 by Robinson and Williams.

“The mission is not to paint pretty pictures,” Robinson said. “It is to tell the story of Glenville.”

The mural, installed in response to police brutality which resulted in the murder of 17-year-old Trayvon Martin, had a profound effect on the community, according to Robinson. She said the storefront adjacent to the mural, which had been empty for years, became home to a t-shirt print shop shortly after the mural’s installation.

“The installation of this mural was a life-changing experience,” Williams said. “We started installing it in late October, and people would stop and talk to us. They would stop in the middle of the street or get off the bus just to talk to us and find out about this mural.”

FrontArt is hosting their first tri-annual exhibition from July 11 through Sept. 30. During the exhibition, 18 different venues will display art created by Front artists.

“Community murals bring the community together, and give neighborhoods a voice that most of the time they do not think they have,” Robinson said.

Sankofa is currently looking for volunteers to assist with the installation of new murals, and also their several community outreach programs. Williams encourages anyone looking to get involved to contact him at (216) 502-6853, or email him at williams9975@gmail.com.