Cleveland Pizza Week is here: These places are my favorite so far 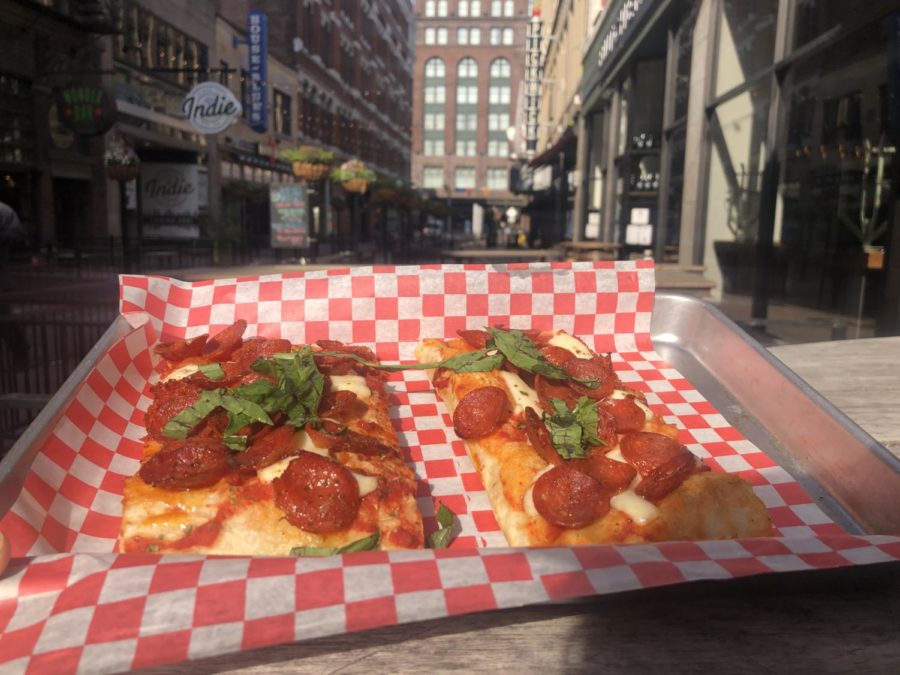 Eating pizza while walking on 4th St. is one of the true joys you can have in Cleveland, and with Cleveland Pizza Week, all sorts of slices are available at a discounted rate.

Despite being only a mid-sized city, Cleveland has a significant number of food options—and nowhere can this be seen more than in the local pizza scene. Though Cleveland doesn’t necessarily have a distinctive style of pizza, like New York-style or Chicago deep-dish, great options abound all across the city. From Ohio City to Collinwood, Downtown to Old Brooklyn, local pizza places dot our city’s map, but with so many options, there is never quite enough time to try them all.

Well, rejoice pizza lovers, for Cleveland Pizza Week is here, with restaurants across the city all paying homage to the best pies. Running from Nov. 8-14, this event celebrates all things pizza and allows pizza connoisseurs to gorge themselves all over northeast Ohio. In this across-city local business collaboration, Clevelanders can enjoy a fresh pizza for only $8. Each joint has their own featured items available for this discounted price, allowing local residents to truly enjoy a smorgasbord of pizza, whether it’s at old favorites or at venues new to the partaker. With 40 participating restaurants, I’ve been able to personally hit up quite a few, with this event allowing me to truly explore the pizza scene like never before. As such, I have a few recommendations, including some from places I would not have expected pizza from, so here we go!

On the surface, a communist themed pizza parlor with the tagline “Pizza for the People” may seem like a strange idea, but once you enjoy the baked goodness that is their pizza, it all falls into place. With several locations around the city, each featuring walls plastered with colorful counter-cultural memorabilia, Citizen Pie has a certain ambience. Inspired by founder Vytauras Sasnaukas’s childhood in Soviet-occupied Lithuania, where he learned to make pizza from scratch using whatever he could find, the pizzas all feel like an act of love—and they only take a few minutes to make! Their smoked pepperoni pizza hit the spot with a good balance of salt and tomato flavor. Be careful though, because their exploding popularity has led to their locations running out of dough hours before their listed closing time, so line up early if you’re going to stop by.

Most known for being one of the first upscale restaurants in the neighborhood and for the speakeasy found within, Bar Cento is an Italian restaurant right in the center of Ohio City, just across from West Side Market. I first went there over the summer and was pleasantly surprised by its Italian offerings, though I didn’t have their pizza at the time—oddly enough, their french fries really impressed me. However, upon hearing of its imminent closure and restructuring, I jumped at the chance to return with their pizza week offerings. And boy, did they not disappoint. With a touch of garlic and extra virgin olive oil, their bianco pizza was something to savor. Hopefully the owners’ next project lives up to the standards set here.

A bit closer to campus, The Fairmount is right across from the top of the hill area of the South Residential Village, down Cedar Avenue. This street is full with food offerings, but The Fairmount is a constant favorite—I’ve never really seen it not be completely packed. Though not especially known for its pizza, as it is really more of a pub, the food there is still quite enjoyable. There I enjoyed the specialty pizza they had for the week, the Italian Meats, along with their old standards like the Chicken Bacon Avocado Pizza and the Caramelized Onion Pizza on a separate occasion. All are good, and with the location being so close to campus, you have no excuse not to check it out. One small note is that the restaurant seems to no longer be partaking in Pizza Week despite being a part of it earlier in the week, so you’ll have to check it out some other time.

Another place not particularly known for its pizza is Sauce the City, located in the Hingetown area of Ohio City. Most notable for their hot chicken sandwiches, which are drizzled with their signature sauce, the venue has become a community favorite and has allowed Cleveland to enter the conversation on which city has the best chicken sandwich. The restaurant has branched out from time to time, and for pizza week, they are offering the Cleveland Hot Pizza, which is essentially a cheese pizza topped with their signature hot chicken and sauce. It’s quite an intriguing combo and I definitely recommend checking it out while you can.

Grumpy’s Café is yet another community favorite rolling out a surprisingly enjoyable pizza option. With its old-time aesthetics and exquisite breakfast and brunch options, Grumpy’s is also constantly packed. I’ve never been there on a weekend without having to wait more than an hour. Keeping in theme with their breakfast specialty, Grumpy’s served up a pizza with pepperoni, chorizo and scrambled eggs, making it a true breakfast pizza. I never thought I would see the day where I would have eggs on pizza, but I suppose the oddest combinations can be more enticing than you might imagine.

Lastly we have Pizza 216, which is right downtown. To be honest, their pizza is good, though nothing special, with a typical margherita pizza offering, but what elevates this place is its location. Connected to the Arcade, those who visit can grab a pizza and stroll around the historic building and see the utter beauty of its Victorian-era glass skylight. There is no greater pleasure to be enjoyed in Cleveland than enjoying some good food, walking around there and then maybe visiting Public Square and the attractions on E. 4th St. And for the $8 price this week, you just can’t miss the experience.