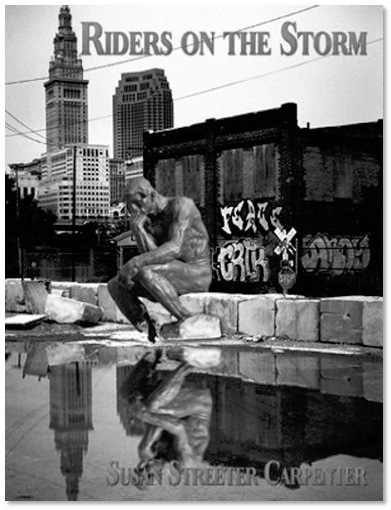 Susan Streeter Carpenter turned 21 in 1968, a year she describes as “a year unlike any other.” It was this year that inspired her to write the novel Riders on the Storm, the story of six young adults living in Cleveland during the tumultuous sixties and seventies. Carpenter read from Riders on the Storm, her newest novel, on Nov. 17 in the Guilford House Parlor. There were around 25 people in attendance, but few were undergraduates. Most of the people who came to see Carpenter talk about and read from her novel were currently CWRU faculty, or students that attended CWRU during the 1960’s and 1970’s.

Carpenter was introduced by CWRU English Department Chair Mary Grimm. Grimm spoke fondly of Carpenter, saying they had known each other since Grimm has been teaching at CWRU.

Carpenter described Riders on the Storm as somewhat autobiographical since she herself graduated from CWRU in 1969 and had witnessed many of the events she describes in the novel. She believes that “little justice has been done to the 1968-1970 years” and she saw that as a challenge which eventually spurred her on to begin writing Riders… in 2002.

Carpenter cited Sir Walter Scott as setting a pattern in historical novels—the middle of the road hero. She describes this literary figure as someone who tries to take sides but can’t, and this allows the reader to see the whole story. Carpenter stressed how important it is in historical writing to stay true to the historical events but leave the important historical people to the side in order to let the characters interact with the events. While writing Riders on the Storm she “put the fiction first” in order to “convey the texture” of the time she was portraying.

The tone of Riders… is very energetic. Carpenter read an excerpt from her novel that centered on two of the main characters, Ivy and Jane, and their struggle in trying to find their friend Chuck. There was constant shooting going on outside, “the air is dangerous” Ivy said at one point, and they had to move swiftly against houses and garages to avoid being seen and possibly shot. The excerpt strongly portrayed the racial divide that was felt throughout Cleveland during the Black Power movement in the late 1960’s and how it affected everyone in the area. Her reading was enlightening to those in the audience who did not live through this era, and it is a well-written and descriptive novel that allows readers to picture the events easily in their mind’s eye, even if they are not familiar with the place or time they are taking place in.

After her reading, Carpenter took questions from people in the audience, many of which came from people who had been attending CWRU at the same time as she. Carpenter also took some time to describe her writing process, discussing how one has to invent the scenes you don’t actually know happened. She may have opted to write a historical novel as opposed to a purely factual book because historical novels allow for the events to be seen through the eyes of a character who can interpret those events with the reader.

Carpenter also mentioned her inclusion of a character with asthma multiple times during her talk. This character, Ivy, was originally not planned to have it, however, while Carpenter was writing Riders… a classmate of her daughter’s died from an asthma attack. This caused Carpenter to use her novel as a means to alert people that asthma is a serious problem that many young people face today.

When describing what it was like living in the 1960’s, Carpenter said, “Every weekend I was living on a different planet than I was the weekend before. Class was a relief.” The sixties are quite indescribable, but Carpenter’s novel Riders on the Storm easily allows readers to feel like they experienced 1968 for themselves.