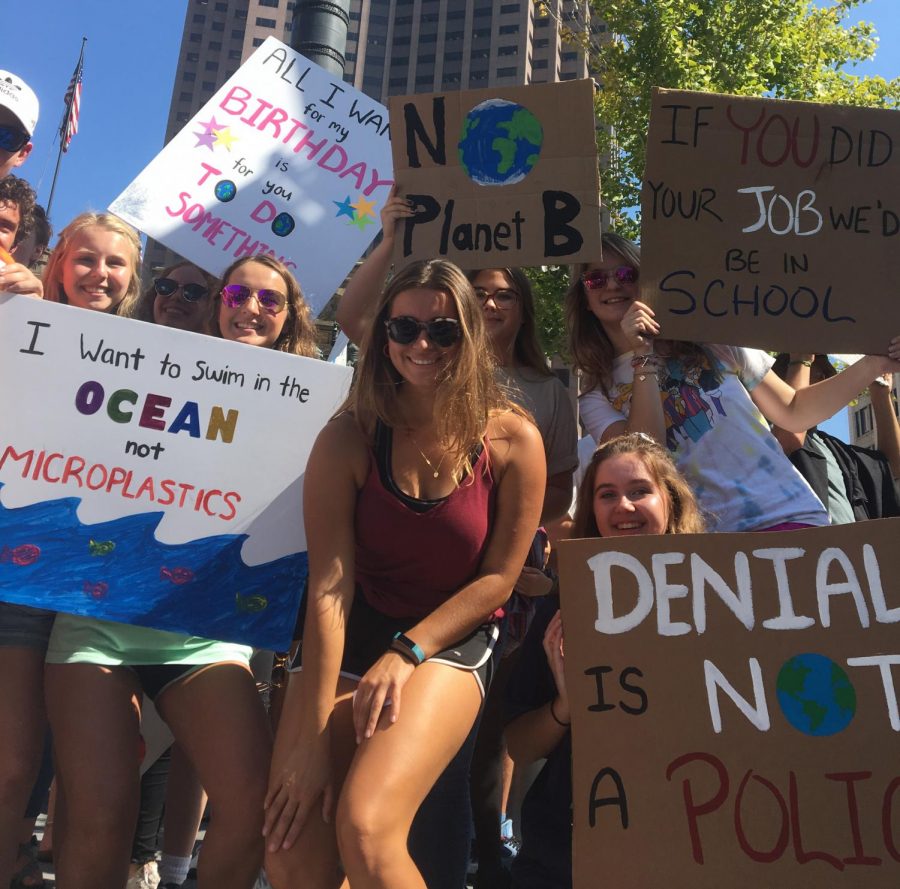 “HEY HEY HO HO FOSSIL FUELS HAVE GOT TO GO.”

Teens from multiple Cleveland high schools chanted and waved signs with messages such as “We are taking time out of our lessons to teach you one!” Students began arriving early at the rendezvous point, their blood as hot as the searing pavement under their marching feet. Their cries climbed up the walls of the three sky-scraping bank buildings surrounding Public Square, where some of those they were protesting against sat in air-conditioning.

Sept. 20 marked an eventful day for climate activism, as millions organized in cities across the globe. The purpose of these gatherings was to raise awareness of the human contribution to climate change and to send a message to world leaders, letting them know that their actions are being closely watched and scrutinized. Young people especially were the focus of these events, following in the footsteps of 16-year-old Greta Thunberg who initiated her School Strike for Climate just last year.

She began solo in August 2018, refusing her education to sit in front of the parliament building in Sweden in protest.  In the year leading up to now, numerous students and teachers belonging to countries around the world have united for school strikes. It has been building ever since, to a peak four million person turnout this past Friday. Other countries are still waiting to strike on Sept. 27.

Cleveland became involved in the climate strike this past year. Case Western Reserve University third-year student Nick Vitello was responsible for organizing the past three climate strikes in March, May and this past Friday, all here in Cleveland. The March strike saw about 50 people, but by September the Facebook page had over 1,100 responses.

“This one is huge,” said Vitello proudly.

Vitello got his foothold in climate activism from professor Matthew Hodgetts’ environmental policy class, who he claims “made it tangible that [he] could act on the climate emergency politically.”

Vitello is responsible for organizing the full week of events from Sept. 20 to Sept. 27, which were all free to the public, because “we don’t believe in commodifying the climate crisis.”

The afternoon was structured with speakers from various backgrounds in various styles: from spoken word by CWRU fourth-year Leo Ndiaye on justice, to verse on the global and social impact of vegetarianism written by Cleveland resident Ari Lesser. Jack McMillen, from the Cleveland Vegan Society, raised the issue that globally, animal agriculture is responsible for more green-house gases—projected to be greater than 18 percent of all GHG emissions in the U.S.—than all transportation emissions combined.  He has refused the consumption of animal products “since before vegan was a word,” over 40 years ago. He once participated in the now defunct Maximal Consumption Program here at CWRU that attempted to integrate these principles into the campus culture.

Perhaps some of the most powerful words given were those of Marina Denunzio, a student at Shaker Heights High School, who has initiated her own climate awareness program and participates in her school’s environmental club.

“We are inheriting a broken world,” said Denunzio. “A world where we allow one of our most precious ecosystems to burn for weeks on end and not bat an eye, but an old church burns down and suddenly everyone has been to France. We’re scared that we’ll kill the world before we even get to have children.”

What brings even more distress to this image of our future is that these issues are running through the thoughts of children, tearing them away from the innocence that previous generations had the privilege of experiencing. Thirteen-year-old Louis LaGuardia stood like a sentry, holding up his sign adjacent to the speakers for the entire two-hour duration of the strike.  He was present because he had to be.

“I may not be able to meet nieces and nephews, because people may not want to have kids,” said LaGuardia with despair. “I’m mad at all these companies. They don’t care about communities,” he added, showing his awareness of the issues of environmental racism. “I’m scared for the future, and ourselves.”

This reunion was also a call-to-action. Sophia Stein of Shaker Heights High School raised awareness of the power of the consumer, reporting on the fall of the dairy industry to plant-based milk alternatives, stating “it’s supply and demand.”

David Duncan, a Cleveland resident who did not give a speech but spoke personally, said that leaders will not change as a result of the meetings. Rather, “you have to take extreme action.”

A few volunteers carried signature books, gathering signatures from registered voters petitioning on a local issue, House Bill No. 6, the mention of which was met with resounding boos from the crowd. This piece of legislation would strengthen Cleveland’s reliance on nuclear energy, which would result in toxic radioactive waste with no proper disposal method. Although comparatively better than fossil fuels in their lack of green-house gas emissions, they are still overshadowed by renewable sources such as wind or solar energy.

These signatures spelled hope for the future. Before the end of the day, the signature books were filled, and the volunteers went to get more. In Denunzio’s words, “we are already making change.”