When the campus shuts down, it's not a vacation for everyone 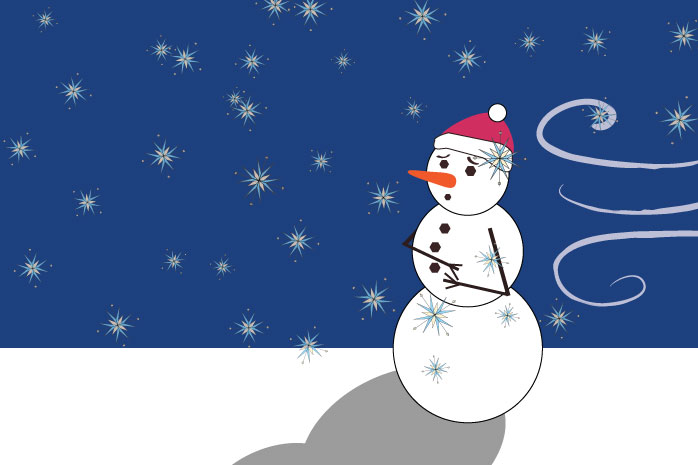 Case Western Reserve University was closed on Jan. 7, but for essential employees like Sarah Zavaleta, a day of work began as usual at 8 a.m.

Zavaleta, a customer service assistant (CSA) for the North Area Office, arrived for her second day of work to an otherwise empty office. “Essentially, the only training I’d had up to that point was reading through the training manuals once and logging a few packages,” she said.

On her way to work, she only spent a minimal amount of time outside while walking back and forth between the office and her car. Even so, Zavaleta got a taste of the storm.

“Turns out that when it is that cold outside, you don’t feel chilled. I just felt pain,” she said. “The sidewalks were sheets of ice, so I had this really classic wipe out. I had my Starbucks in hand and everything. My coffee froze the moment it spilled onto the ground—Jack Frost was in his prime.”

Once she made it into Wade Commons, her responsibilities included opening the North Area Office, distributing keys and logging packages. Zavaleta was not originally scheduled to be working alone that day, but because of the subzero temperatures and dangerous road conditions, she was the only student able to take over during the morning shift.

Cleveland’s deadly weather was not an isolated problem. Many other areas and events were cancelled in Ohio due to the extreme cold as well. This list included the House of Blues, the Cleveland Museum of Art and, ironically, Boston Mills and Brandywine Ski Resorts. Flights were cancelled all over the U.S.

“Due to the extreme cold temperatures and the wind chill factor, we did have a few broken water pipes that led to flooding in the residence halls,” said Loretta Sexton, the interim associate director for housing.

Included in the housing damage were broken pipes in Storrs House, Sherman House and a duplex on Fairchild Avenue. Only five students were affected, all from the Fairchild apartments. They were temporarily relocated during plumbing repairs.

These repairs didn’t take long, due to the work of other essential staff members. Maintenance, custodial staff and an outside cleaning company responded to the problems immediately. Cleanup began on Tuesday and was mostly finished on Wednesday.

“A round of applause should go out to all the maintenance staff that had to traverse the cold several times that day, and every day, to keep the dorms functional and the campus running safely!” said Zavaleta.

However, damage continued to occur.

“As the weather warmed up the rest of the week, the potential for additional broken pipes increased as the pipes which were previously frozen, warmed up,” said Sexton.

Soon, leaks occurred in Storrs and Pierce, and a pipe broke in Staley.

Maintenance staff members came to the North Area Office to sign out keys from Zavaleta, in order to gain access to the specific areas that were experiencing problems.

“I ended up seeing several people needing help from the Wade Office. Mostly though, I just logged packages, which turned out to be a pretty zen way to spend my time,” she said.

CWRU Housing wasn’t the only part of campus affected by the storm, though. Other buildings across the university also experienced issues due to the low temperatures on Jan. 7. According to a CWRU Alert sent out in the morning of the same day, weather also caused pipe problems in Kent Hale Smith building and DeGrace Hall.

Thanks to maintenance staff, the broken pipes did not interfere with the start of the spring semester.

CWRU may have been closed, but the work never ended.