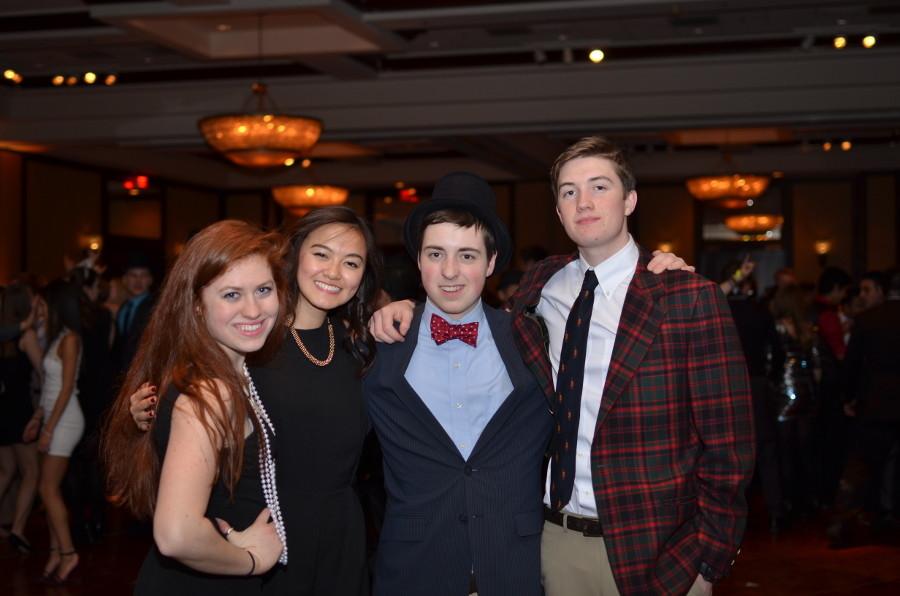 Students in elegant dresses or fancy suits began to shuffle into a line for the buses. The crowd was bustling and excited to party like it was 1920 at the Class Officer Collective’s (COC) Snowball 2015, despite the frigid below-zero temperatures.

For those who were able to get on the first wave of buses, the bus ride on the memorable cheese-colored buses was bumpy but quick. Upon arriving at the Marriott Downtown, students were greeted by their COC officers giving away black felted top hats, long strings of pearl necklaces and black and white flapper feather headbands, and by waiters carrying trays of delicious hors d’oeuvres. There was an array of fruits, vegetable dip, egg rolls, dumplings, the famous donut bar and more to choose from.

“We made sure to have a lot of vegetarian options to cater to all our guests” said COC officer, Sapna Sundar.

However, for those who were not able to get on the first wave of buses, the event did not start off as smoothly. Even though students were lined up in the Thwing Atrium at around 9:30 p.m., some had to wait over 90 minutes to get on a bus. Then, upon the late arrival these students were not greeted with the same abundant amounts of delicious foods. Instead, they were greeted with radishes.

Sundar was aware of the food shortage and explained that there was a shortage last year as well.

“COC will try to have more food for next year,” she said.

One of the most popular attractions during the event was the photo booth. Students were able to take pictures in the iconic booth using the goofy props and objects provided. The booth was open until the end of the event. It even got busy to the point that the photo booth wouldn’t print the pictures quickly enough for the line.

Additionally, students were able to enjoy the bar for age-appropriate drinks. Even students who were not 21 and over could order fancy nonalcoholic drinks such as Shirley Temples.

It would not be a party without dancing; the Marriott was able to provide a fairly large dance floor for the students to show off their moves and to let loose. There was a good atmosphere, and even when people began to leave, they would come back when they heard a song they wanted to dance to.

“I noticed the dancefloor was clearing out,” said sophomore Mio Xu. “Then, ‘Blank Space’ by Taylor Swift came on, and everyone came back to dance.”

Although the speakers blew out at about the midpoint of the event, the problem was quickly fixed within five or 10 minutes. Shruti Shah, another COC officer, believes the problem will be fixed next year.

“COC will better manage the speakers next year so it won’t happen again,” said Shah.

The two COC officers, Sundar and Shah, suggested that they will have a more in-depth sound check in the beginning of the event next year.

After the event, COC sent out a feedback form to everyone who attended the event.

On the feedback form, students can even give their suggestions for Snowball 2016’s theme. The feedback form will be available until next Wednesday, March 4.

Seeing all the people who showed up, Sundar said that the event was successful overall. COC sold all 600 tickets to the event, which shows that their attendance increased from last year.

Shah said, “I was particularly impressed that so many students were excited about the theme and came dressed up for it.”

Additionally, a more diverse crowd showed up to this year’s event than any previous event (and any other COC event).

“Since there is enough demand, the event will be even bigger next year,” Sundar said.