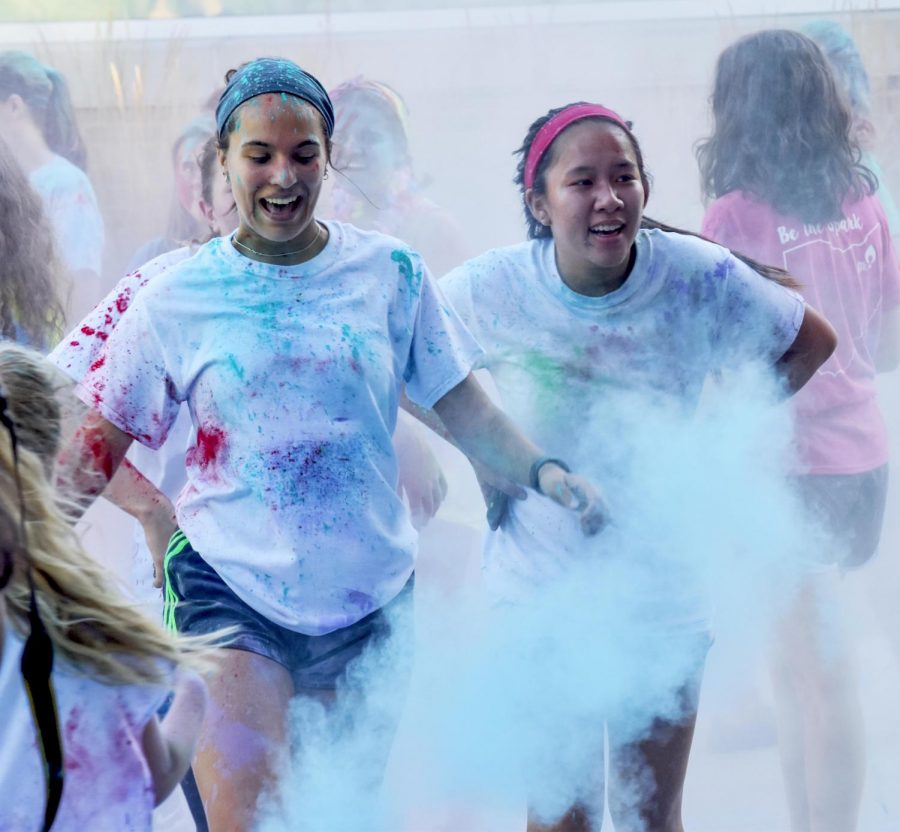 SpartanTHON is one of Case Western Reserve University’s most philanthropic organizations; within seven years of its presence on campus, the group has raised over $370,000 for University Hospitals Rainbow Babies and Children’s Hospital (UH Rainbow). Its FT(5)K Color Run, a five kilometer race which has been held annually for the past four years, is one of the organization’s biggest events.

On Saturday, Sept. 15, 167 entrants ran on a breezy, cloudless morning.

UH Rainbow is the recipient of SpartanTHON’s fundraising because of its status as a beneficiary of the Children’s Miracle Hospital Network (CMNH), a nonprofit organization which raises funds and awareness for hospitals, research centers and other entities focused on pediatric care.

According to Martina Pace, the Program Director for the Children’s Miracle Hospital Network at UH Rainbow, the funds from SpartanTHON make a significant difference at the hospital.

“All funds raised through CMNH activities in Northeast Ohio stay at [UH Rainbow] and are allocated to support a variety of high priority needs within the children’s hospital, [which] have no other funding sources,” she said, “such as pediatric services, programs, equipment and research. Examples include our family and child life services team, art and music therapy and patient educational programs.”

Emily Kilmartin, a fourth-year student, is the Overall Director of SpartanTHON. Kilmartin joined SpartanTHON her first year at CWRU.

“I went into [SpartanTHON] not knowing what was happening,” said Kilmartin, but she soon “fell in love” with the organization.

Kilmartin, along with SpartanTHON’s three other directors and numerous volunteers, ensures SpartanTHON’s purpose “to raise awareness for child health issues [like] Cleveland’s high infant mortality rate” is accomplished. To do this, SpartanTHON organizes the Color Run, the Dance Marathon and other events.

Although the Color Run attracts fewer participants than the Dance Marathon does, the event is no less high energy or fun. Ten minutes before the event was slated to begin, hype music blasted through the vicinity and a herd of white-shirted runners roamed the field adjacent to Leutner Commons.

Serious racers stretched or cycled through a series of plyometric warm ups. Others demonstrated their soccer skills or played with the young children in attendance, doing rolls, headstands and running around wildly. After a few brief remarks, including an announcement of prizes for the top three male and female finishers, the race started at 9:15 a.m. with a burst of color.

When racers dashed into the home stretch of the 5,000-meter race, 20-some odd minutes later, they were met with smiling faces, cheers and another storm of colorful dust. The energy was so infectious, many runners finished the race with smiles—a rare occurrence at running events.

Elizabeth Adams, a third-year nursing student, enjoyed the Color Run so much the first time she participated last year that she chose to run again, and plans to continue the trend in the future. A strong runner who finished third last year, Adams describes the Color Run as “really fun,” and “very positive and uplifting.”

One of the beauties of SpartanTHON, according to Adams, is the many ways in which students can get involved. After meeting members of the executive board, whose passion and dedication she describes as “infectious,” Adams decided to also volunteer at last years’ Dance Marathon.

“I would highly recommend anyone getting involved, at whatever level they can,” said Adams. “It’s such a rewarding organization and truly wonderful to see the difference [we] can make in these kids’ lives.”

Adams demonstrates that SpartanTHON’s mission—the purpose of its nine-year tenure as one of CWRU’s most distinguished student organizations—is never far from the minds of its volunteers and participants, UH officials and the families it benefits.

This mission is perhaps best said by Kilmartin: “[SpartanTHON is] for the kids, people might not know what we mean when we say that, but we are for every baby, every doctor and every nurse.”