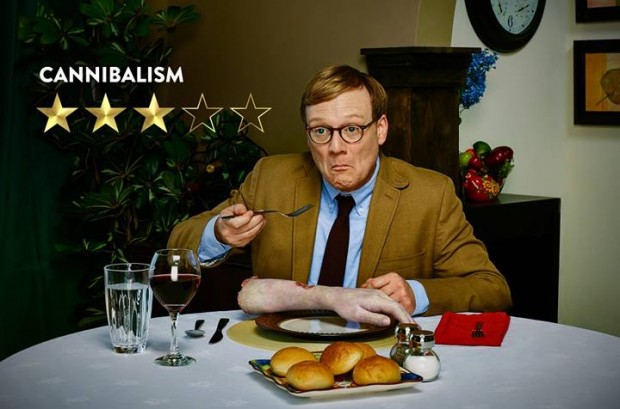 "Life: it's all we have," says Forrest MacNeil, fictional host of Comedy Central's "Review." "But is it any good?" He's here to tell us.

Nobody really knows how to explain “Review.” The Comedy Central series’ official logline reads: “A critic takes aim at intense real-life experiences in lieu of food or cinema. Fair game includes divorce, anonymous sex and all manner of criminal activity.”

That does, at its most basic level, explain how the series goes down. Life reviewer Forrest MacNeil (Andy Daly) takes on experiences to rate, based on the suggestions of his fans on social media. First season reviews ranged from the aforementioned divorce to space travel to eating 15 pancakes in one sitting (and later, 30 pancakes in one sitting). In the July 30 season two premiere, Forrest took on brawling, blackmail and glory holes.

The series far transcends its logline, though. Forrest’s commitment to his reviews sends his life off the rails throughout the entire first season. Within each review, Forrest’s journey takes him to unexpected levels of absurdity. The reviews also bleed over into each other, leading to a surprisingly serialized comedy series; somehow, the disjointed pieces all come together to form one, very funny story. Like I said, it’s tough to explain.

What isn’t tough, though, is telling you why you should tune in. “Review” is one of, perhaps the, funniest show on television right now. The series is original, groundbreaking and, most importantly for a comedy, laugh-out-loud funny. It’s the type of show that lets you indulge your funny bone while still feeling smart; it’s prestige television that also just happens to leave you in stitches.

The entire first season is available on Comedy Central’s website for free, and if you’re looking for a quick way to burn a few hours, I’d highly recommend a binge in order to prep for the currently airing second season. This binge is best accompanied by an open mind, your funny bone and large quantities of pancakes.