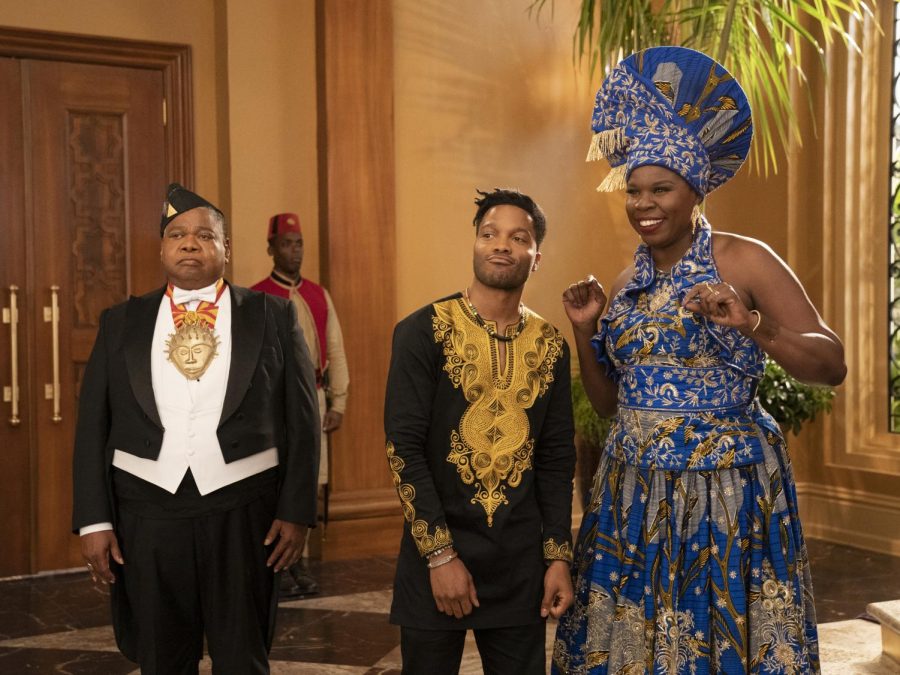 Jermaine Fowler (middle) gives a great performance in this lackluster sequel to "Coming to America."

The original “Coming to America” is a classic American comedy. Starring comedian Eddie Murphy as Prince Akeem Joffer, the crown prince of the fictional African nation of Zamunda, and Arsenio Hall as Semmi, Akeem’s best friend and servant, the 1988 film featured a quirky premise, groundbreaking representation and an oddly sweet story to back it up. In a satire of Black America, Murphy’s Akeem goes to Queens, New York in order to escape his pampered lifestyle and find true love. Through the adventure, he and Semmi encounter eccentric New Yorkers, filled with the abrasive yet lovable personality types the city is known for. By going through a fish-out-of-water lens, the audience sees urban America through a new perspective, and perhaps gains a greater appreciation for it, as Akeem does. Though it has not, perhaps, aged as well as other 80s films, it still resonates across generations and is frequently brought up as a common cultural touchstone.

So, of course, a lackluster sequel had to be made 33 years later. In less of a film than an extended encore to the original, all your old favorites are back in the supremely unfunny rehash that is “Coming 2 America.” But goodness does it look beautiful. The film features the works of costume designer Ruth E. Carter, who won an Academy Award for her work on Marvel’s “Black Panther,” and a beautiful palace set that greatly exceeds the matte paintings of the original, making a delight for the eyes. Unfortunately, there’s a sense of hollowness behind it all, with none of the mise-en-scène looking particularly real and, instead, resembles more of a processed product. While the original might not have had high production value, there was a certain grittiness and authenticity behind it all, adding a charm that is simply lacking in the new film. In a moment that best encapsulates the film, the baby elephant from the first film, Babar, returns for his gratuitous cameo, except now he’s CGI. The high production values also only serve the unwarranted number of dance numbers and musical moments, featuring a who’s who of Black celebrities that ultimately does not serve the narrative at all.

And boy what a narrative. In the film, Akeem, now king of Zamunda, is on the search for a child he unknowingly conceived during the events of the first film in order to crown him the new prince. That in and off itself isn’t a terrible premise, but the mechanisms behind it all are just aggravating. With a political intrigue plot that features Wesley Snipes’s entertainingly over-the-top performance as General Izzi of the militant neighboring Nexdoria, Akeem is forced to mollify the general and pass over his three legitimate daughters for the heir apparent in order to have a male successor. How that male heir is conceived is also quite strange. As it turns out, during the events of the first film during the iconic bar crawl scene, Akeem was apparently drugged and raped by Leslie Jones’s character, Mary Junson. The worst part of it all is that the rape is seemingly played off for laughs with Mary featured in the rest of the movie as a secondary protagonist that the audience is supposed to root for.

Akeem’s son, Lavelle Junson, is played charmingly enough by Jermaine Fowler, who feels he must prove his worth as the new crown prince of Zamunda as he is set up in an arranged marriage to the daughter of General Izzi. Lavelle is a likable character that is unfortunately bogged down by his rote role as he tries to straddle his dual identities as both a New Yorker and a prince of Zamunda before falling in love himself. His relationship with his royal barber Mirembe (Nomzamo Mbatha) never quite makes its mark, reducing Mirembe to simply a woman with dreams. Apparently, just that alone is enough for Junson to fall madly in love, as he yearns for an independent partner, an apparent rarity. Indeed, the film is strangely woke yet also regressive when it comes to gender issues, extolling gender equality while also reducing all females in the film to supporting roles containing little depth.

All of this makes “Coming 2 America” a confusing mess of a film more concerned with looking pretty and delivering fan service than actually having something new to say. Ultimately, that’s not a terrible thing to be, and I’m sure some fans of the original will derive enjoyment out of seeing all of their old favorites. However, beneath it all is the feeling of an unneeded corporate product, void of any true purpose and containing none of the edge that made the original so great.