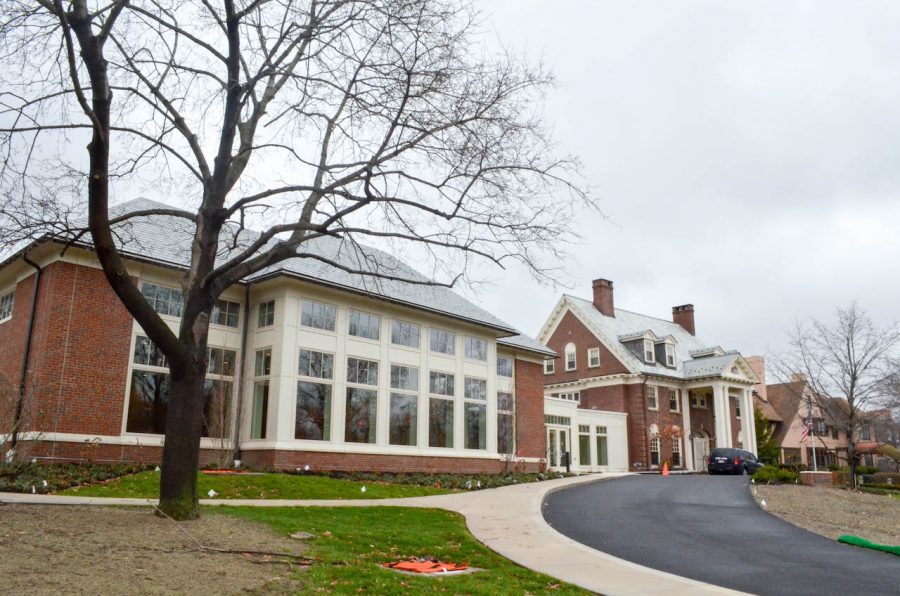 The construction projects for the west wing of Clark Hall and for the Foster-Castele Great Hall were completed over winter break. The front entrance to Clark Hall is expected to be open at the end of May.

As school resumes, students and faculty are greeted by two new buildings on campus: the expanded Linsalata Alumni Center and the renovated Clark Hall.

Launched in spring 2016, the renovation project of Clark Hall is now partially completed. The west wing of Clark Hall is in full display with its historical arched windows and brickwork, while the front entrance remains surrounded by construction nettings.

Clark Hall was designed by Richard Morris Hunt, a famous American architect who also designed the pedestal of the Statue of Liberty. Clark Hall has stood on Bellflower Road for approximately 125 years and is one of the oldest buildings on campus. The historical value of Clark Hall was recognized by Campus Planning and Facility Management, a division of the Office of the Office of Administration, as part of the renovation proceedings. According to Stephen M. Campbell, the vice president of Campus Planning and Facility Management, the renovators have been working to preserve the original architectural features of the building and restore it to its original state.

Now, with the majority of the construction completed, some users of the building said they are satisfied with the facelift.

“I think that the repairs to Clark Hall have effectively restored the look of one of the campus’ most historic and attractive facilities,” commented Peter Knox, Eric and Jane Nord Family professor and the director of Baker-Nord Center for the Humanities. Knox’s office as well as the Baker-Nord Center is located inside Clark Hall.

Knox also hopes that “now that the major part of the restoration is complete, students and the public will have an easier time gaining access to Clark Hall and the many events sponsored by the Baker-Nord Center.”

According to a university spokesperson, the front entrance of Clark Hall will be completed by the end of May.

Additionally, construction of the Foster-Castele Great Hall, an addition to the Alumni Center, is also completed. In fall 2015, when the construction project was first proposed, controversy arose, as the expansion demolished the historical Hubbard House. Despite opposition, the school moved forward with the project. The new building is currently accepting reservations for events.

The Foster-Castele Great Hall is connected to Linsalata Alumni Center by a glass-enclosed hallway. Able to hold 240 people for banquet events and 280 people for lectures, it serves the original Alumni Center as a large gathering place. It will be officially open and in use on Feb. 17 for a Board of Trustee dinner.