Conserve the Rock… and Roll 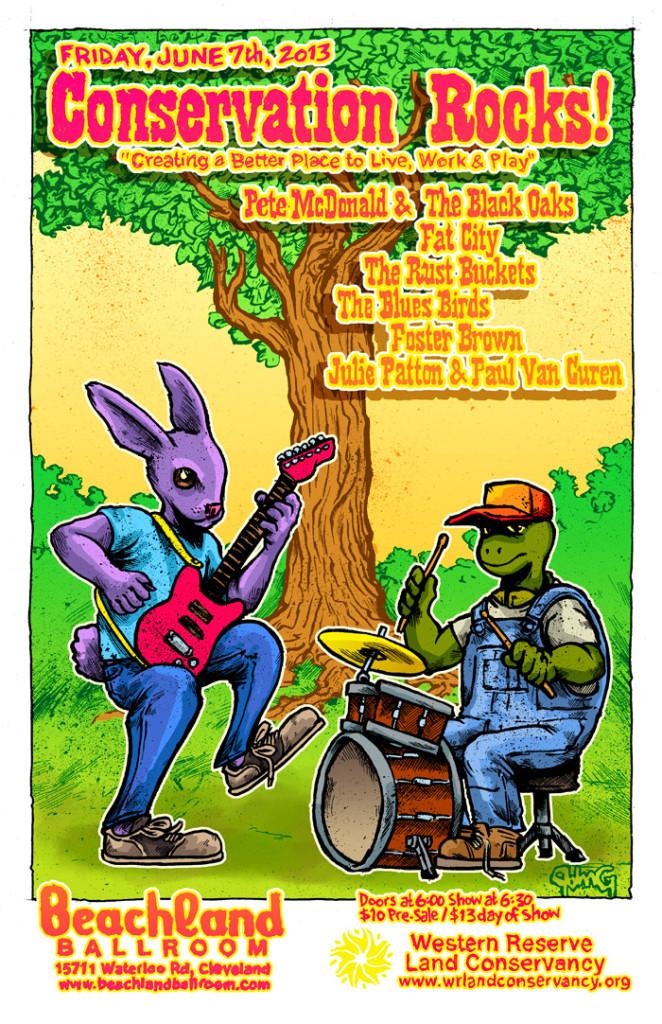 More information about the event and the headlining band can be found at http://www.petemcdonaldmusic.com/.

It is no secret that land conservationists know their rocks. However, on June 7, those who also rock out will take the stage at the Beachland Ballroom, located at 15711 Waterloo Road, for the annual Conservation Rocks! concert.

This year is the fourth year since the concert’s formation, and the event will host six bands: Pete McDonald & The Black Oaks, Fat City, The Rust Buckets, The Blues Birds, Foster Brown and Julie Patton & Paul Van Curen.

“Each band has at least one member that works in the conservation field,” said Pete McDonald, the singer of Pete McDonald & The Black Oaks and the director of stewardship for Western Reserve Land Conservancy (WRLC).

McDonald has coordinated the event since its creation; his workplace hosts the event. He first became involved with this conservancy after pursuing music full-time for a few years.

“I realized music was gonna be a hard life for me,” said McDonald.

After this realization, McDonald immediately threw himself into another field that he was passionate about: land conservation. When he started working for WRLC, he noticed a very consistent coincidence. “You go to meetings of conservationists and you notice the pattern of a lot of musicians being there,” he said.

McDonald, who had already developed a positive relationship with the Beachland Ballroom, decided to design the Conservation Rocks! concert to give different bands an opportunity to perform among friends and colleagues, and also to raise awareness about land conservancy.

It is not difficult for McDonald to carry on his identities as a land conservationist and a musician. “Music’s a big passion of mine,” he said. “I take it wherever I go.”

The other performers must have passions similar to McDonald’s, considering the popularity that Conservation Rocks! has gained since its establishment. Last year, the show attracted about 250 to 300 people to the Beachland Ballroom. This year, the concert will bring more bands to the stage than in the past, choosing to have shorter sets to keep the show moving quickly.

McDonald has been “really satisfied with its popularity,” as has the venue itself. “Beachland Ballroom feels it’s successful too so they have us back,” he said. The bands performing this year have also had a positive response. “All the people in the bands are excited and friendly about the event,” he said.

Each band will bring a different and unique sound to the stage, ranging from folk to blues to rock. All the bands have at least one member involved with land conservation, spanning from bluebird conservation to gardening.

At the end of the night, the bands will crowd onto the stage, join each other, and jam together one last time in an exciting finish.

Though the show will definitely help spread a message of conservation in all its different forms, McDonald never ceased to emphasize one of the most important reasons for having the show: “Just to have fun.”

The funds raised at the event help to mainly cover the cost of putting on the concert, but the WRLC makes a small amount each year. Regardless, the money will eventually find its way into helping different efforts. “Any revenue goes toward land conservancy in one way or another,” said McDonald.

Tickets cost $10 in advance and $13 at the door, and can be purchased through the Beachland Ballroom website or at the