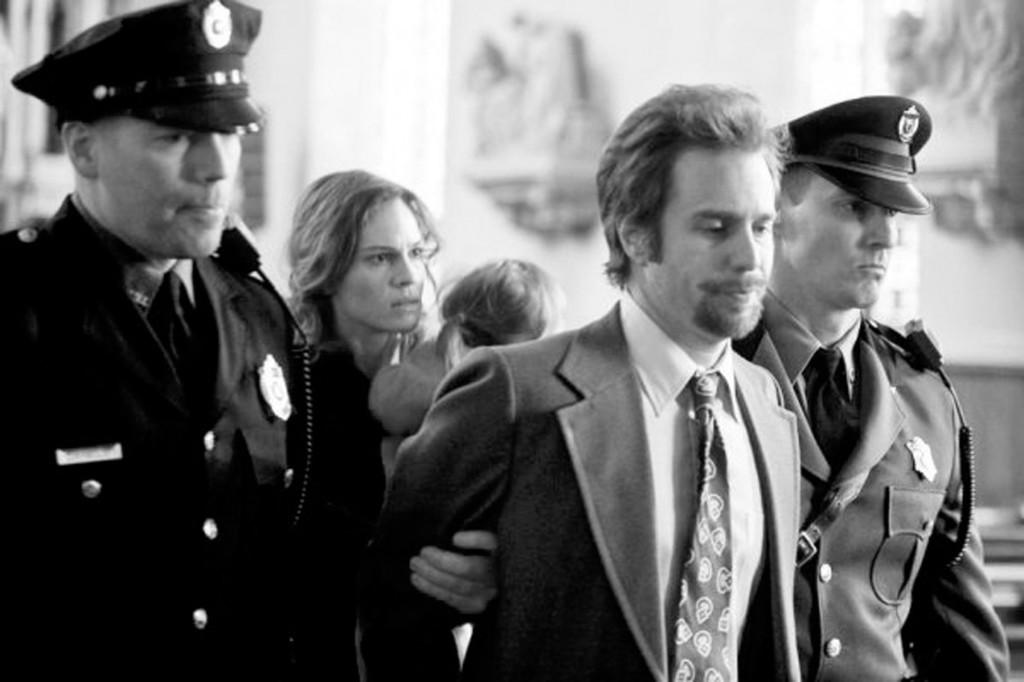 Conviction is the real life story of how Betty Anne Waters (Hilary Swank) earned a law degree to get her brother, Kenny (Sam Rockwell), out of prison for a crime he didn’t commit. What could have easily been an uninteresting magazine article has been stretched out into a painfully boring feature film.

Director Tony Goldwyn had his directorial career in 1999 with the drama and box office flop, A Walk on the Moon, followed two years later with a mainstream comedy that barely broke even, Someone Like You. Since then he’s been busy directing popular TV shows. It’s no wonder Conviction feels like a painfully long episode of “Law & Order,” considering Goldwyn’s resume includes stints on “Damages,” “Without a Trace,” and “Law & Order” itself.

The structure of the film breaks down pretty simply: Betty Anne Waters wants to get her brother out of prison, but there’s an obstacle. Then, she meets a character introduced for the sole purpose of helping her over that particular hurdle. Each scene starts with everyone looking like they’re about to cry, then a bit of hugging, then everyone goes right back to looking like they’re about to cry.

Swank’s face is frozen throughout the movie in an unsympathetic scowl – one of a bored actress trying to inhabit a terribly conceived character trying to carry an embarrassingly ill-conceived narrative. Rockwell plays crazy well, and he’s proven that before. The issue is that his character is never given anything to do except act crazy and hug his sister.

The development of Rockwell’s character never actually makes any sense. At one point in the film we see his character take his newborn daughter into a bar, attack another man with a glass bottle, then start stripping. After events like this, the audience is meant to still sympathize for Kenny, rooting for his sister as she neglects her own children to get this psychopath out of prison. Screenwriter Pamela Gray tries to explain Betty Anne’s dedication to her brother with series of flashbacks where a young Kenny is depicted caring for his sister amid a tumultuous home life. Even if these scenes do hypothetically come across, there’s still no sense that this side of Kenny still exists within Rockwell’s segments.

Minnie Driver makes a valiant attempt with her portrayal of Abra Rice, Betty Anne’s similarly aged peer in law school. Unfortunately, screenwriter Gray never really treats her character seriously. Approaching Betty Anne at a point when the main plot line is at its most stagnant, Abra simply says: “We’re gonna be friends because we’re the only ones in class that’ve gone through puberty.” And with that, they are best friends. The saddest part is that this is one of the most well thought out character introductions in the movie. Betty Anne excluded, all of the characters pop in and out of scenes with no attempts at development or any interactions that aren’t purely to fuel the story of how Betty Anne (spoiler alert!) got her brother out of prison.

As children wrestle in hay underscored by an unmemorable string quartet, one can faintly see the words “Oscar bait” appear onscreen. With its estimated budget over $12 million, I can only hope that most of Conviction’s budget was embezzled. Unfortunately, that’s probably not the case and this 107 minute piece of garbage really dropped $12 million that could have gone towards financing two or three features with less overpriced talent.