Coping with “The West Wing” never felt so good

Streaming recommendation of the week 11/6/20 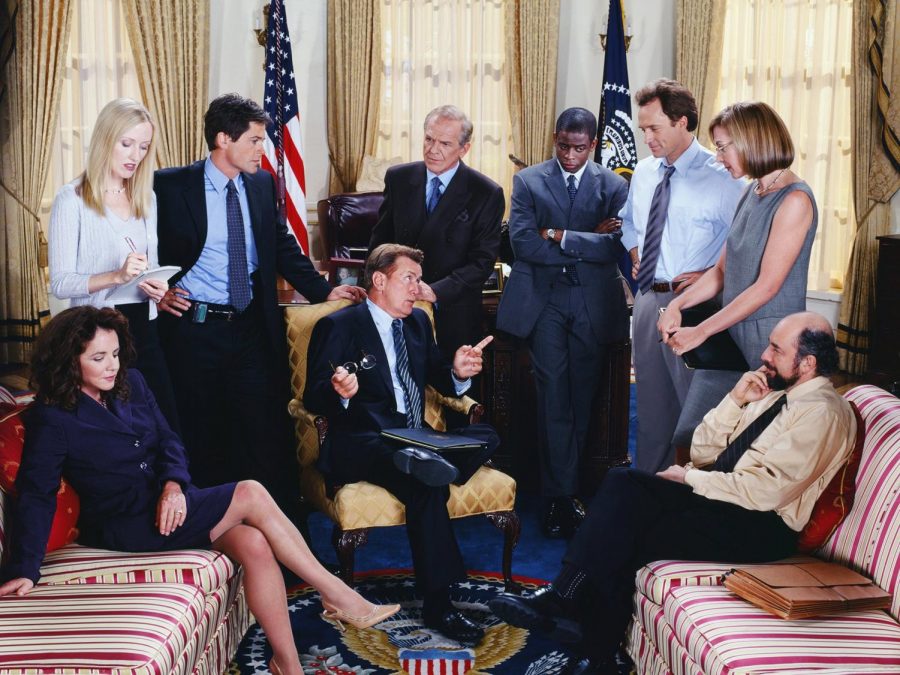 A view of what government should be, or a liberal dreamscape? Regardless, “The West Wing” still has a place today.

This has been a crazy week. As of this writing, there is still no definitive winner of the 2020 Presidential Election, with vote counting still occurring and the current president illegitimately claiming to be the victor. What a fitting way to conclude the four years of this wild presidency. With an administration that always seems to be in chaos, with constant scandals and turnover, many may find it appealing to look to an administration that is calmer and more stable, with civic servants that are genuinely interested in helping people. No, I am not talking about the Obama administration––I’m talking about the Bartlet administration, as seen in the TV show “The West Wing.”

Running from 1999 to 2006, “The West Wing” was created and written by Oscar-winning screenwriter Aaron Sorkin, and follows the presidential senior staff during the fictional Democratic administration of an economist turned president, Josiah Bartlet, played by Martin Sheen. With an ensemble cast consisting of Rob Lowe, Dulé Hill, Allison Janney, Bradley Whitford, John Spencer, Janel Moloney and Richard Schiff, the series tracks the ups and downs of being a political servant in the White House and dealing with the political tumult that comes along with the job. What makes “The West Wing” so notable is the extremely optimistic and feel-good take on the potential good that can be accomplished by the executive branch if the people inside of it work to serve the people and are open to being convinced by convincing speeches and new policy ideas.

While there are political disagreements and partisan debates inside of “West Wing” episodes––with the series generally taking the liberal side of issues––lawmakers and public servants across the federal government are depicted as well-meaning people who believe in the American republic. This isn’t quite the reality that Americans know today, the idealism presented in the show is appealing for those wishing for a better America in reality. The show, which was mostly released alongside the Bush administration, showed many discouraged liberals a more positive vision of what government should be. Now, it could be playing a similar role during the Trump presidency.

While the show has been derided as liberal escapism and comfort food for those wishing to escape the political realities of the day, some people, myself included, are returning to “The West Wing,” now on Netflix, to remind themselves that better days are always possible. When the world seems to make no sense, the eloquent speeches and grandiose whisperings of President Bartlet and crew allow me to escape the current political moment and imagine what it would be like if bipartisanship was possible and our government acted in good faith across parties––if elections were decided by ideas rather than through court battles.

Now the cast of the series has returned in this new political moment with a reunion special. In a stage reading of the season 3 episode “Hartsfield’s Landing,” the original cast––minus John Spencer who passed away in 2005––are back reprising their roles, now all sporting a few grey hairs. Inside and outside their re-enactment of the episode, the cast endorses the power of voting and the pure nature of America’s democracy in this special meant to raise awareness for the nonprofit organization, “When We All Vote,” which seeks to increase participation in elections. The episode itself is set around two situations the Bartlet administration is dealing with: a military standoff between China and Taiwan and the first primary elections for President Bartlet’s reelection taking place in the small New Hampshire town of Hartsfield’s Landing. As Bartlet engages with his advisors while playing chess, he wrestles with his character, military brinkmanship and diplomacy.

Meanwhile, other advisors try to ensure a Bartlet victory in Hartsfield’s Landing before realizing the sacred nature of democracy. In the stage play adaptation of the episode, breaks featured appearances from former First Lady Michelle Obama, former President Bill Clinton and various celebrities including “Hamilton” creator Lin-Manuel Miranda and actor Samuel L. Jackson, all urging viewers to vote in the election. While it is optimistic to suggest that voter turnout alone will be what saves America, voting is a civic duty and anything that tries to drive turnout is a worthy cause.

While watching it, I was struck by how the episode, and the series by extension, was so seemingly out of touch with the current political moment, but perhaps that makes it all the more special. If one day we can become the America “The West Wing” represents, with politicians and civil servants that do what they think is best, the country will be all the better for it.

“The West Wing” is streaming on Netflix currently and moving to HBO Max soon, with the reunion special streaming there currently.