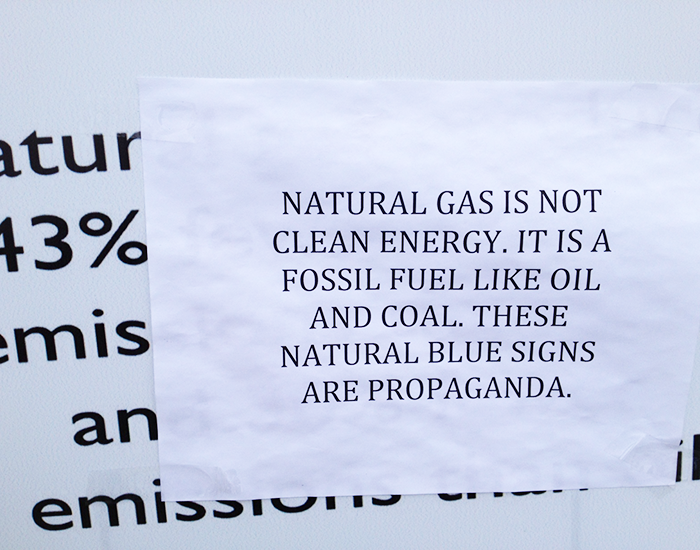 Some students did not take to kindly to Marketing 304’s advertising campaign for American’s Natural Gas Alliance (AGNA). Many signs, like the one pictured above, posted by the class were covered over by those protesting AGNA’s message that natural gas is a clean energy source.

Over the past few years, the debate about the legitimacy of natural gas as a clean, affordable energy source has spread across the country. Recently, the conversation has begun to circulate the Case Western Reserve University campus, prompted by the efforts of professor Casey Newmeyer’s Marketing 304: Brand Management class.

Brand Management is a class that focuses on understanding customer needs and creating the right products and experiences for the target market to create optimal customer satisfaction. A large portion of the course revolves around a company called EdVenture, which has brought together over 100,000 students at more than 1000 colleges to participate in advertising competitions for companies like Toyota, the Princeton Review, and the U.S. Department of Defense.

Newmeyer described EdVenture projects as “a great opportunity” for students to run a real marketing campaign with an actual budget and measureable results.

“It will certainly be a benefit to them in their future careers,” Newmeyer said.

This semester, the 21 students in the class were asked to advertise for America’s Natural Gas Alliance, or ANGA, a company that represents 29 of North America’s leading independent natural gas exploration and production companies. ANGA wanted the class to educate the campus on natural gas and to increase awareness of natural gas a viable energy source.

ANGA provided the students with a $3000 budget to execute their advertising strategy. In this particular campaign, the top three schools will be invited to present their project to ANGA in Washington D.C. in late April.

The teams will be judged based on the number of press hits they received, the number and quality of events held, and the percentage increase of awareness of natural gas, based on surveys conducted at the beginning and end of the campaign.

The first-place winner will receive a $5000 reward, while second place will get $3000, and third place will earn $1000. For Weatherhead School of Management’s marketing department, it’s not only about the money, but also about the prestige.

The class has run various events on campus over the course of the semester, including ice cream giveaways from a company that uses a fleet of natural gas powered trucks, and bringing a natural gas Honda Civic to the quad. However, the event that got the most attention was relatively small compared to their past events. The class, with all of the proper permissions, placed signs with facts about natural gas along the Binary Walkway, using their class’s company name of Natural Blue.

The facts were relatively straightforward: “Natural gas in Ohio was responsible for $2.03 billion in total labor income in 2010,” and “Approximately half of U.S. homes use natural gas was their primary heating fuel.”

Still, the signs managed to catch the attention of some students who were offended by the claim that natural gas was a clean form of energy.

The class was extremely surprised by the reaction that their signs received.

“We weren’t trying to go out and create a riff among the CWRU community,” added her fellow student Scott Mackie.

The main reason that environmental groups have a problem with the use of natural gas is due to hydraulic fracturing, also known as fracking.

Fracking involves pumping millions of gallons of chemically treated water at a pressure of 9,000 pounds per square inch (psi) into shale formations deep underground. The high-pressure water cracks the shale, allowing the natural gas located underneath it to flow through underground pipelines towards a well where it is collected.

Fracking critics worry about the negative environmental effects fracking can have, including destroying the aesthetic beauty of the surrounding land, contaminating the water source, and releasing greenhouse gases. Many critics claim that the water from fracking seeps through the earth to contaminate the ground water.

However, most geologists believe this contamination is impossible. Regardless of scientific disagreements, spills and blowouts have been shown to contaminate water sources in areas around drilling regions. Although natural gas industry officials claim that only one to three percent of the methane produced in drilling and transporting natural gas is released into the air as a greenhouse gas, a recent study by professor Robert Howarth of Cornell University places that number closer to eight percent.

ANGA, who does not officially support or condemn fracking, encourages the use of natural gas as an economically and environmentally sound form of clean energy that will improve air quality, add jobs, and enhance energy security.

According to many studies, burning natural gas emits half as much carbon dioxide and one-third the amount of nitrogen oxides as burning oil or gasoline, and about one percent of the sulfur oxides as coal combustion.

Natural gas proponents say that drilling will create jobs. Whether the jobs appear or not, natural gas is relatively abundant in the United States.

At the moment, only Honda makes cars that can be powered by natural gas.

In addition, only 3,500 of the 120,000 gas stations in the country offer natural gas-based car fuel. Buses in several cities run on natural gas, using a central filling station, and many energy officials suggest that more bus systems and trucking companies do the same. Still, even natural gas industry officials admit that it should simply be used as an intermediate stage while moving from polluting fossil fuels to cleaner, more renewable sources of energy, like solar power.

Although there are environmental concerns associated with fracking, the Brand Management students would like to stress that the signs were merely a part of a class project, and that they do not support or condone fracking. Their assignment was to promote the use of natural gas as an alternative to coal and oil, and they took no stance on the methods used to obtain natural gas.