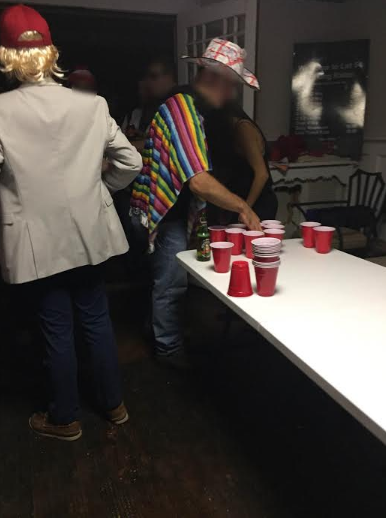 At a Halloween party, a member of the Phi Delta Theta fraternity wore a serape, which evoked a new round of debate on freedom of speech and racial discrimination.

In The Observer on Nov. 30, fourth-year student and Radical Student Union President Gabriel Murcia wrote a letter to the editor outlining his efforts to seek an administrative response to an incident he witnessed at a Halloween party. A member of the Phi Delta Theta fraternity chose to wear a serape, a type of shawl typically worn by Mexican men. Serapes were also worn as costumes by members of the same fraternity in the Greek Week Variety Show this past spring, which instigated a condemnatory statement from concerned Latinx students at Case Western Reserve University.

In his letter, Murcia described how his meetings and emails with various administrative offices, including the Greek Life Office and the Office for Inclusion, Diversity and Equal Opportunity, have not yet resulted in a firm response to the incident that occurred on Halloween, with administrators citing that the issue is one of independent action and expression, which cannot be reprimanded through immediate university action. Murcia submitted a Bias Report, but declined to meet with more administrators after he received no assurance that the result of further meetings would produce tangible results.

Murcia said he feels that appropriate educational dialogue should have been initiated last spring, along with some form of probation, which would have reduced the possibility of repeated incidents of cultural appropriation and misrepresentation.

Murcia received an email from the student that wore the costume, in which the student admitted, “I wore [the costume] as a form of protest because we have still yet to receive an apology from the three Latinx students about how they handled our play. Writing an anonymous letter with egregious demands and then sending it to the entire school except us was neither honorable nor mature.” The student continued, writing that if someone had made fun of his “hillbilly” background then he would have laughed with them and welcomed them to the party.

“Everyone was accepted at my party regardless of race, gender, sexual preference, etc., as long as they were wearing a costume, so to claim that myself or my party was racist is not true,” the student wrote. “My actions were not encouraged or supported by the football team, my fraternity, or the school so there was no institutional this or that at any level.”

According to third-year student Justine Bernacet, who contributed to the original statement from Latinx students in the spring, the student at the party was further perpetuating an offensive cultural stereotype, as well as contributing to widespread derogatory perspectives on Latinx individuals.

“You have many Latinx individuals who are discriminated against in the workplace, who are not paid fair wages, who are paid less than their white counterparts, who are accused of being illegal or undocumented, and you have students here on campus who are children of undocumented parents who face really harsh realities,” Bernacet said. “Wearing Mexican garb as a costume only serves to perpetuate racist and derogatory perspectives or views on this marginalized community.”

However, since the letter was published, voices against immediate university action can also be heard. Third-year student Katie Ryan said she believes that the costume was an insensitive choice on the part of the fraternity member, especially following the response to the Variety Show last semester, but she also thinks that strict disciplinary action without following the Code of Conduct’s investigative process “would be a serious overstep of authority and a troubling display of knee-jerk, punitive censorship.”

She added, “Given the fact that cultural appropriation is often a result of ignorance instead of malicious intent, dialogue would be far more productive than punitive measures, which in this case would only serve to increase campus polarization.”

For fourth-year student Justo Karell, there is a distinction between preventive and reactive action.

In an email interview with The Observer, the student explained that he now regrets the action he took: “Hindsight is always 20-20…. What I did was very un-Christian like and did not coincide with the values of my fraternity.  I was not a good ambassador for Christ nor my fraternity….  I let resentment over the fact that we were never apologized to fester and my ‘Don’t tread on me’ pride about no one telling me what I can wear in my own home cloud my judgement.”

The student wrote that he still does not believe this was an example of institutional racism, as he was an individual acting on his own. After going through his fraternity’s judicial review process after wearing the costume last Halloween, the fraternity member wrote that he was told, “Another instance like this and you’re out.”

The student wrote that he will focus on planning joint service events with his fraternity and cultural groups on campus and he encourages higher attendance at the events these organizations hold throughout the year.

“My hope is that through actual interaction we can learn about their beliefs and customs while at the same time debunk the stereotype of Phi Delts being dumb jocks who condone racist actions and don’t do anything besides football and Greek Week,” he wrote.

According to Murcia, his main priority at this point in time is to garner support for the petition seeking sanctuary status for the CWRU campus. The petition, he said, calls for the university administration to oppose the persecution of undocumented individuals—many of whom are Latinx—in the U.S. in an effort to promote unity and fairness for all.

“Every action and non-action is political,” Murcia said. “The respect of people of different races, genders and religions should not be seen as bold politics but rather as basic human decency.”

Bernacet, in response to Murcia’s letter to the editor, said she feels that when students make the decision to speak out against discrimination, “The responsibility and the duty of the Case Western Reserve University campus is to listen and to really think critically about what that means.”

“If one student is discriminated against or oppressed, it should be a concern for all of us,” said Bernacet.

When students feel that they have witnessed incidents of bias on campus, there are certain resources available to potentially initiate further action. The bias reporting system, for example, is one way for individuals to report such incidents. Reports can either be anonymous or be calls for direct action, after which the individual would meet with a representative from the Division of Student Affairs to understand possible options.

“The whole bias reporting system is not a punitive or sanctioning type thing, we’re not a judge [and] jury type place, but we do want to hear concerns of students, support them and validate them,” said Naomi Sigg, the director of the Office of Multicultural Affairs.

After submitting a report, individuals may be referred to counseling services, health services, the police department or the Title IX office or be advised to engage in the judicial process. Sigg emphasized that the Office of Multicultural Affairs is available as a resource to all students, even if they feel that they do not know who to approach or if they should report an incident to the bias reporting system.

Referring to the costume-wearing issue, Sigg said, “My hope is that these moments that are really difficult, when we have folks who just aren’t able to understand where people are coming from … I hope that we can continue to use dialogue and that we can … start thinking about how can we all be learning.”

Correction: The original version of this article incorrectly stated that Murcia had not submitted a Bias Report.