Court is in session on marriage equality 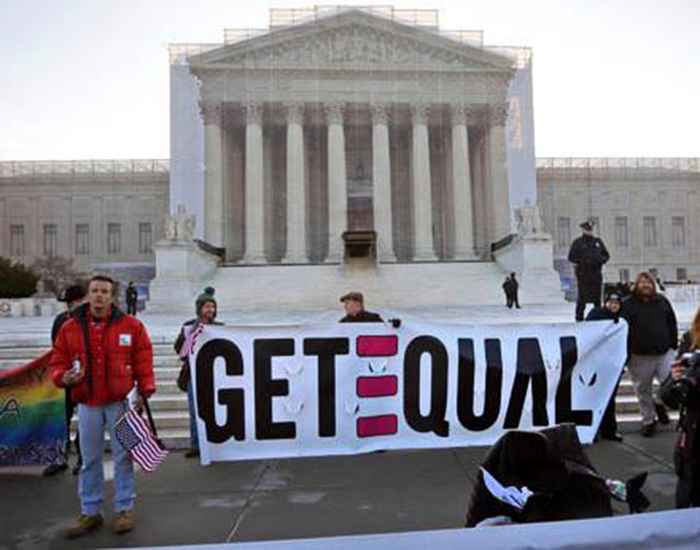 If you follow politics, watch the news, or even check Facebook, you’ve probably heard the big news from Washington last week: the Supreme Court is deciding on gay marriage. Everyone rejoice and change your profile picture, we’re almost there! Except not really.

While the courts are hearing not one, but two cases related to same-sex marriage, neither is set to determine whether or not marriage equality should be a civil right around the nation.

The first case, Hollingworth v. Perry (2013), is set to decide the constitionality of California’s Proposition 8 that overturned a California Supreme Court decision legalizing same-sex marriage. In this case, it is possible that the Justices could issue a sweeping decision and give the right to marriage to every citizen of this nation, but it looks increasingly unlikely following the oral arguments last week.

Justice Anthony Kennedy, the un- disputed swing vote, said that the court was entering “uncharted waters” and has questioned whether or not they should even hear the case. Since the Ninth Circuit Court of Appeals had previously declared Prop. 8 unconstitutional, same-sex marriage would return to California if the court decides to abandon the case.

While it is likely that Hollingworth will be a victory for marriage equality, it likely won’t have any federal impact

unless Justice Kennedy joins the conser- vative Justices and upholds the legality of Prop.8.

The second case addressing the De- fense of Marriage Act (DOMA) came to the Supreme Court as United States v. Windsor (2013). In this case, Windsor challenges that defining marriage under federal law as existing only between one man and one woman is unconstitutional, as it denies federal benefits to same-sex couples legally married in their jurisdiction.

A lower court ruled section 3 of DOMA to be unconstitutional, which is similar to Hollingworth. However, the Republican majority in the House of Representatives challenged the ruling and paid for the lawyers to argue that DOMA was legal. From the oral arguments on Mar. 27, Justice Kennedy appears to side with the liberal justices, but for different reasons.

Justices such as Ginsberg and Sotomayor argue that its discrimination against gay and lesbian couples violates the 14th Amendment, while Kennedy believes that under federalism, the government has no right to regulate marriage. While the case may not be decided from a civil rights perspective, it still will likely have the outcome of striking down DOMA, which would federally recognize same-sex marriages performed in states that have found them to be legal. How- ever, this ruling would not protect the rights of a same-sex couple that is legally married and lives in a state that does not recognize that marriage.

So while it appears that LGBT advocates will see a victory in both of these cases, neither will have the sweeping effect à la Brown v. Board of Education (1954) that people were hoping to see. In a not-so-shocking way, the outcomes of these cases will likely reflect the trepidation and hesitance with which anything is accomplished in the modern American political system.

If you really want to do something for marriage equality, call or write your local and national legislators instead of changing your profile picture. Gay marriage obviously has the popular support of the nation, but politicians need enough pressure to actually stand for anything. Go online to find out who represents you and how to contact them.

Evan Wilson is a junior studying Cognitive Science and Biology. For him, politics is akin to watching a car crash… you know something awful is about to happen, but you can’t really do much now, so you might as well enjoy the show.